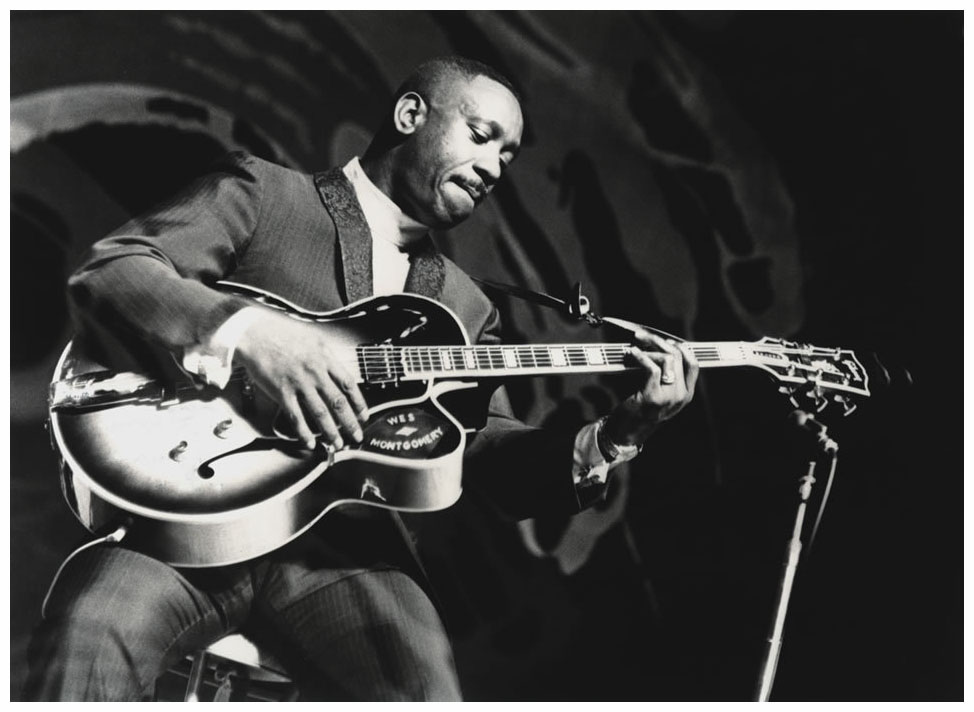 Wes Montgomery seemingly burst out of nowhere onto the national jazz scene at the beginning of the 1960s, dazzling fans and fellow musicians with his warm and bluesy, melodically-inventive sound, driven by a unique approach of using his thumb instead of a pick to play, and constructing his solos in a pattern of single notes to octaves to full chords, giving them a thickening intensity. But Montgomery had been around for years, briefly going out on the road with Lionel Hampton‘s big band and playing frequently around Indianapolis with his brothers Buddy and Monk. It took awhile for his distinctive approach to develop, and he was also financially responsible for a large family, working day jobs to pay the bills and then playing in the clubs of "Naptown," as the city was known, into the wee small hours of the morning. Until recently jazz fans could only imagine what it would have been like to hear Montgomery in his pre-fame years, but Resonance Records has unearthed and released several extensively-detailed CDs and LPs that document that vibrant period, as well as the era that followed; several are featured on this program.

To Naptown natives, Montgomery was the best-kept secret in jazz; but that began to change in 1959, when composer Gunther Schuller, hipped by trombonist and Montgomery friend David Baker, sang the guitarist‘s praises in a national article. Around that same time a gig at Indianapolis' Missile Lounge would result in a quantum leap for Montgomery‘s career.

The Missile Lounge was the afterhours club where saxophonist Cannonball Adderley (visiting the city as part of an all-star jazz tour) famously "discovered" Wes Montgomery and got him signed to Riverside Records, where his subsequent studio LPs gained him a fast-growing reputation and a national audience. Riverside producer Orrin Keepnews wanted to capture Montgomery in a live setting, and an optimal moment occurred in 1962 when the guitarist crossed paths with Miles Davis‘ working group of the time in Berkeley, California and enlisted the trumpeter‘s rhythm section, plus saxophonist Johnny Griffin, to back him at a coffeehouse. Miles was reportedly furious and threatened to keep his musicians, which included pianist Wynton Kelly, bassist Paul Chambers, and drummer Jimmy Cobb, from playing the gig, until Kelly speculated that that meant Davis would pay them the same amount of money that Keepnews had promised for the recording date, to which Miles snapped, "Okay, you can do it!"

Only two official live recordings were released in Montgomery's lifetime. One of them was recorded in 1965 at the Half Note in New York City, with the same rhythm section of Miles Davis veterans that had backed Montgomery and Johnny Griffin on the club recording made three years earlier in California. The Half Note recordings have been touted as a pinnacle of Montgomery‘s art, in part because the guitarist was in his prime and playing with such a simpatico trio, and because Montgomery would soon follow a more commercial path in his recording choices:

Montgomery harbored a great deal of anxiety when it came to flying, and this hindered any attempt to put on live performances abroad. In early 1965 he finally acquiesced to a trip to Europe, bringing along his working trio of the time that included Harold Mabern on piano, Arthur Harper on bass, and Jimmy Lovelace on drums. Montgomery‘s reputation as a jazz guitar star preceded him, and the group garnered warm and receptive audiences on their tour of the Continent. It would be the only time that Montgomery ever played Europe; three years later he would die of a heart attack on June 15, 1968 at the age of 45. In recent years numerous live recordings featuring him have either been discovered or issued in official form, including this music from Paris, where the man from Naptown found himself in 1965:

Special thanks to Zev Feldman.