My Interview With Duke Ellington 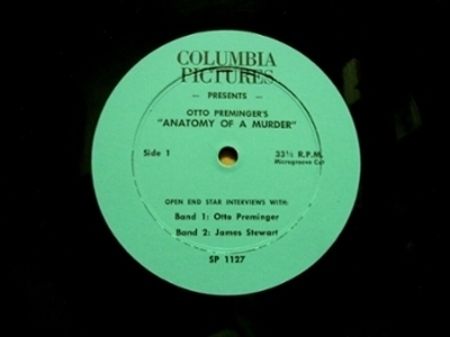 An "open-ended interview" promotional record from the 1959 film ANATOMY OF A MURDER.

Well, dear listeners, I hope you won't be inspired to think of Kenny G duetting with Louis Armstrong (though perhaps you should) when you hear my friendly 12-minute back-and-forth with Duke Ellington, who always gets my vote for the greatest American composer of the 20th century--perhaps of any century--and whose score for the movie Anatomy Of a Murder is the subject of this recent Night Lights show. My age was still in single digits when Mr. Ellington departed this mortal realm, and I assure you that I was no jazz-loving, DJ-prodigy five-year-old who managed to score a sitdown with the maestro to talk over a 1959 soundtrack in the waning years of his life; nor have I mastered the mysteries of time travel.  So how did I converse with him?

In the mid-20th century record companies sometimes sent out promotional records to radio stations that featured standalone answers from artists to scripted (but unrecorded) questions.  These were called "open-ended interviews," and gave DJs the opportunity to seemingly talk with the performers about themselves and any timely releases the label was marketing, as well as references to, and spaces for, specific tracks from those releases to be played or dubbed in along with the DJ's queries.  Not having been around to hear them in their heyday, I can't attest to how convincing they would have sounded to those tuning in.  It probably didn't matter; it was probably just cool to hear a musician you liked talking on the radio, in the distant era before digital and social-media saturation.

I don't know (but wouldn't be surprised) if there's a collector's market for such recordings these days, but they have popped up from time to time as bonus or hidden tracks on modern-day CD reissues.  I've heard one on Sony's expanded 1996 edition of the Byrds' 1966 album Fifth Dimension, for instance.  (In it David Crosby describes the Byrds' new single "Eight Miles High" as "a musical tribute to John Coltrane... a jazz musician we admire tremendously.")  Sony also included an open-ended interview (and accompanying script in the liner notes) with Duke Ellington as part of its 1999 reissue of Anatomy Of A Murder, the score that Ellington and Billy Strayhorn wrote for Otto Preminger's 1959 court room drama starring Jimmy Stewart.  Anyway, I decided to have some fun and use it as originally intended 63 years ago.  There's a bit of music from the film as well.  We do love you madly, as my very good friend the Duke would always say.