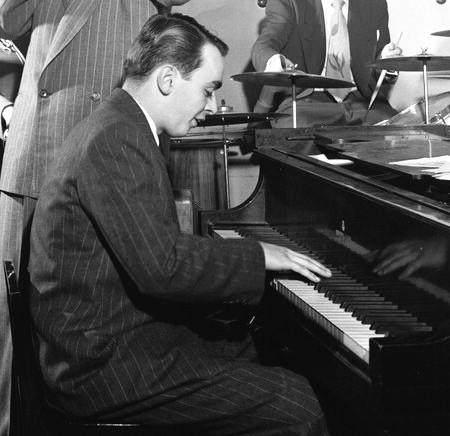 Jazz scholar Gunther Schuller championed Burns as a force for pushing jazz orchestras "beyond the requisites of dance music." (Photo by William Gottlieb, courtesy of Library of Congress)

Ralph Burns was one of several young arrangers and composers influenced by modern classical music and bebop who emerged on the big-band jazz scene at the end of World War II, and he helped shape the sound of Woody Herman’s orchestra into the 1950s.  On "Midcentury Maestros: Ralph Burns," we’ll hear some of the key recordings the Herman band made of Burns’ music, plus two of his earliest arrangements and some later collaborations with saxophonists Lee Konitz and Ben Webster.

Change was in the cultural air as World War II came to an end in the mid-1940s.  The jazz world was still at the height of the swing era, but the big bands that had dominated it would soon begin to wither in the face of economic challenges and bebop, a revolutionary new form of jazz that didn’t emphasize dancing and relied on much smaller musical combos.  Still, a new wave of young arrangers and composers who came of age in these years forged fresh and exciting sounds for the big bands that endured.  These young arrangers tended to be sympathetic to bebop and favored classical composers like Igor Stravinsky.  One of them was pianist Ralph Burns, born in Newton, Massachusetts on June 29, 1922.

As a teenager Burns developed a taste for the big bands of Duke Ellington, Benny Goodman, and Count Basie, as well as marijuana.  He attended the New England Conservatory of Music but left after one year to move to New York City, where he became active on the 52nd Street jazz scene, eventually signing on with Charlie Barnet’s big band and then vibraphonist Red Norvo’s group.  By 1944 he was playing piano and writing for Woody Herman’s big band, which would become one of the most renowned and influential orchestras of the time.  Burns’ rich, complex writing, full of adventurous yet subtle harmonic shifts and tonality, dexterously deployed the instrumental talents of the Herman big band to create a vibrant midcentury-modern soundscape.  Jazz scholar Gunther Schuller also cites Burns’ “rhythmic excitement, inner drive and energy” in his book THE SWING ERA, and also champions Burns as a force for pushing jazz orchestras “beyond the requisites of dance music.”  But Burns could do it all; he could write for vocalists, for swinging big bands, and for modern-oriented small groups.  We’ll begin with one of the very first recordings of a Burns tune, with Sam Donahue’s big band in 1941 performing the then-19-year-old’s composition and arrangement “Flo-Flo,” on Night Lights:

Burns soon left Barnet to join what would become known as Woody Herman’s First Herd.  The First Herd had a joyous, explosive energy, a seemingly fearless musical exurberance. One musician, looking back 50 years later, called the First Herd "Killers of the mid-40s, the most thrilling bunch of musicians ever assembled." In addition to hits, vocal tracks, and small-group sides, the First Herd ventured into the realm of what might be considered pre-Third Stream, the convergence of jazz and classical music that would gain attention in the 1950s, by recording an extended composition by classical composer Igor Stravinsky.  Stravinsky first connected with the Herman big band through his admiration of a Burns piece they recorded called “Bijou,” which didn’t surprise Burns: “(Bijou) sounded like Stravinksy,” he later said, with Herman biographer Gene Lees noting its Stravinsky-like qualities as “jagged, angular, with notes flicked into it in unexpected and asymmetrical ways.”

The Herman band proved to be a marvelous platform for the young Burns, recording scores of his compositions and arrangements in the mid-1940s.  Burns continued to write for the band for many years afterwards.  It was here that Burns first established the reputation that jazz scholar Jeffrey Sultanof celebrated on the previous Night Lights program Woody Herman's Trip To Mars:

Woody Herman’s big band in 1945 performing Ralph Burns’ composition “Bijou,” the Stravinsky-influenced piece that won the composer’s admiration, and Burns’ arrangement of the movie theme “Laura” before that.

The brutal pace of the mid-1940s big band world eventually led Burns to step away from the Herman orchestra’s piano chair, so that he could focus exclusively on his prolific pace of writing.  He also worked with small groups formed primarily of bop-influenced Herman-circle musicians such as saxophonist Serge Chaloff and trumpeter Sonny Berman.  Here’s Serge Chaloff with Burns on piano performing Burns’ composition “Pat,” on Night Lights:

Two late-1940s small-group dates featuring music written and arranged by Ralph Burns—trumpeter Sonny Berman’s “Nocturne,” and baritone saxophonist Serge Chaloff doing “Pat.”  Chaloff and Berman were both members of Woody Herman’s big bands of that era, as well as participants in the heroin culture that overtook the jazz world in those years, with Berman dying from an overdose just a few months after “Nocturne” was recorded.  For all of its musical excellence, Herman’s orchestra became infamous for its on-and-offstage behavior—throwing mannequins out of hotel windows, the band bus segregating itself by drug of choice, and musicians nodding off in the saxophone section during performances are just some of the anecdotes of the late-1940s Second Herd, as the ensemble came to be known.  Ralph Burns generally stuck to marijuana, which dreamily enhanced the classical influences already at play in his writing.  “We used to get high in the hotel room and listen to those symphony records (by Stravinsky and Ravel),” Burns said.  “It was bound to have an effect.”

There were other decadent influences about as well. One night a woman with a British accent showed up at a Chicago concert, Burns later said, "out of her skull, dancing away, just having fun." Afterwards she introduced herself as "Lady MacGowan" and invited the band up to her hotel room for a party-the first of several evenings of what Burns said were like "orgy parties!" Lady McGowan may or may not have been an English aristocrat who spent some time in mental institutions, but her frolics with the Herman band were vividly recalled by the musicians decades later. Burns' composition named in her honor is a masterpiece, occupying what jazz writer Loren Schoenberg calls

the realm of instrumental fantasy; the unusual tonality Burns achieves throughout never sounds like cheap makeup or false exoticism; he conjoins structural joints with unusual sounds and figures the same way that a magician uses misdirection to help create an illusion.

After Woody Herman broke up his Second Herd at the end of the 1940s, Burns accompanied the bandleader to Cuba as part of a smaller-sized ensemble; while there, Burns ended up getting arrested for refusing the services of a prostitute!  Back in the states, he made some recording dates under his own name, a pattern that would continue throughout the 1950s.  One of them, Free Forms, featured solos by up-and-coming alto saxophonist Lee Konitz, whose cool, melodically-inventive playing had first come to light in the Claude Thornhill orchestra and on recordings made by progressive-jazz guru Lennie Tristano.  Another, Ralph Burns Among The JATPS, drew on musicians associated with jazz promoter Norman Granz’s Jazz At The Philharmonic concerts.  From that album, here’s a Ralph Burns composition highlighting tenor saxophonist Flip Phillips—“Spring In Naples,” on Night Lights:

Throughout the 1950s Burns continued to contribute to Woody Herman’s reformed big band, now referred to as the Third Herd.  In 1952 they recorded Burns’ composition “Terrisita,” which jazz scholar Jeffrey Sultanof calls “one of Burns’ masterpieces, further establishing him as an important American composer.  One is reminded of Burns’ ‘Bijou’ in that the music goes back and forth from rumba rhythm to swing, but this composition is far more ambitious.”  Woody Herman’s band performing Ralph Burns’ “Terrasita,” on Night Lights:

Ralph Burns would go on to make numerous jazz albums under his own name and as a writer for other dates, and working frequently on Broadway during the 1960s.  He’d gain prominence in the movie-scoring industry as well, contributing to films such as Martin Scorsese’s New York, New York and winning Academy Awards for his work on Cabaret and All That Jazz.  He died in 2001 at the age of 79.  After Burns’ death, Woody Herman biographer Gene Lees published a tribute revealing that Burns, like his friend, fellow arranger/composer, and influence Billy Strayhorn, had lived his life as a gay man, at a time when doing so was professionally and personally dangerous.

I’ll close with a Burns piece that originally featured Stan Getz on the Herman band’s 1940s recording, the fourth part of Burns’ extended work “Summer Sequence,” titled “Early Autumn.”  It is Burns’ best-known composition, and we’ll hear a version recorded by saxophonist Ben Webster, who had done several recording stints with the Herman band right around the time that Burns joined and saw his career take flight.  Fittingly enough, the Webster album on which it appeared was co-arranged by Burns and Billy Strayhorn.  Ben Webster doing Ralph Burns’ “Early Autumn,” on Night Lights:

Special thanks to John Porter.