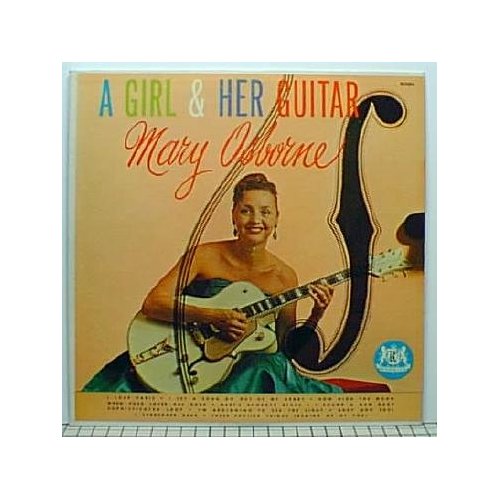 It's perhaps too easy to say that Mary Osborne is an unsung heroine of jazz history, though there's certainly a large degree of truth to such a statement. A disciple of Charlie Christian, she played with her own subtlety and fire, negotiating the swing-to-bop era of the 1940s with deceptive ease, running the gamut from big bands to R and B and the Nat King Cole-influenced jazz-pop stylings of a trio setting. Some of her finest moments came in all-star and all-women small combos playing the modern jazz of 52nd Street in its Forties heyday. From the 1950s on Osborne would record as a leader on only a handful of occasions, but her playing only gained in luster, especially on a 1959 date with pianist Tommy Flanagan and drummer Jo Jones. Put the whole notion of gender aside; Mary Osborne was, first and foremost, simply a superlative jazz guitarist.

From North Dakota to New York

Mary Osborne was born in Minot, North Dakota in 1921, the tenth of eleven children. Encouraged by her barbershop-proprietor and musician father, by the age of four she was learning to sing, tap dance, and play the ukulele and piano, and she also took up violin; then, when she was nine, her father gave her a guitar for Christmas. "When I picked up that first guitar, that was it," Osborne told writer Linda Dahl many years later. "I knew that's what I wanted to play the rest of my life."

Featured twice a week on a local radio show, for which she was paid in Hershey bars, by her teens Osborne was performing in an all-female territory trio, and she was thrilling to the late-night broadcasts of vibraphonist Red Norvo and singer Mildred Bailey that came all the way across the prairie from Chicago. One night in Bismarck, North Dakota, she heard, in person, another jazz musician who would change her life forever: guitarist Charlie Christian. When she walked into the club, she thought his sound was that of a tenor sax; she'd never heard a guitarist soloing with a hornlike concept like Christian's. Christian was impressed when he learned that she, too, was a Django Reinhardt fan, and he ended up playing with her, giving her musical tips and advice about buying her first electric guitar. Looking back in 1951, Osborne told Downbeat:

I was young, dumb and eager to learn. Charlie had me sit in. He sat on the stand with me, and while I'd take a chorus he'd be saying "now don't rush... watch your time... that's it, baby... you're making it now.' I was excited that he even bothered to listen. He inspired me and I tried to imitate him. From then on I had a mad little trio.

By the early 1940s Osborne was in New York City, where she married a young trumpeter named Ralph Scaffidi and eventually landed a gig with renowned violinist Joe Venuti. Powerful gossip columnist Walter Winchell wrote that Venuti had finally found a worthy replacement for his deceased partner, guitarist Eddie Lang. Osborne would end up working with other prominent New York-based jazz artists such as tenor saxophonist Coleman Hawkins, and she also got a big break for national recognition when she was invited to play at the second annual Esquire Jazz concert, broadcast from New York, Los Angeles, and New Orleans, with musicians like Duke Ellington and Louis Armstrong heading the bill.

The 1940s were a very active time for Osborne-and looking back many years later, she was able to recount only one time when her gender provoked any sort of sexist comment from a fellow musician, who accused her of using what he called "the girl gimmick" to establish her place in the jazz world:

Still, some jazz promoters were unable to resist grouping women artists together for recording dates, undoubtedly because they believed in the so-called "girl gimmick"-a concept that annoyed the great pianist and arranger/composer Mary Lou Williams no end. Osborne recorded several times as part of an all-woman group with Williams, and she also worked in an all-woman trio with pianist Beryl Booker and bassist June Rotenberg.

In addition to these all-women groups and other jazz acts, Osborne was also working with R and B performers like Wynonie Harris and Big Joe Turner in the late 1940s, and she was leading her own trio as well, continuing to play frequently on New York's esteemed 52nd Street. Osborne was not aiming strictly for a jazz audience, however; decades later she told writer Linda Dahl that she was going for a sophisticated jazz sound that would also appeal to the hotel crowd, with guitar, bass and piano lineup, augmented by Osborne's singing, that emulated the sound of the Nat King Cole Trio. Osborne's heart was always rooted in jazz, but her good looks and singing voice gave her the chance to cultivate a crossover appeal, culminating in records such as the one she made with pianist Jack Pleis for the Decca label in 1947-"You're Gonna Get My Letter in the Morning."

In spite of her potential crossover appeal, by the early 1950s Osborne had still not achieved star status-but she had been working actively, recording with musicians such as Ben Webster, Dizzy Gillespie, and Mel Torme, and she was also beginning to appear on television, including the Arthur Godfrey Show in 1951, leading jazz critic Leonard Feather to sing her praises in Downbeat Magazine, in an article headlined, "Mary Osborne: a TV Natural." It was radio, however, where she landed her next significant gig-an 11-year-long job playing on"The Jack Sterling Show," a popular daily morning program, with Osborne often working off arrangements by saxophonist Al Cohn.

Osborne also performed and recorded with a group led by trombonist Tyree Glenn, and she continued to show up from time to time on other jazz records as well, including a 1954 date that Feather put together called Cats Vs. Chicks, featuring an all-male group led by trumpeter Clark Terry sparring with an all-female group led by pianist Terry Pollard.

"Exactly What I Was Born to Do"

Between 1955 and 1959 Osborne gave birth to three children, still carrying the third when she had an opportunity to make her first album-length jazz statement, recording with a stellar group that included pianist Tommy Flanagan and drummer Jo Jones. Osborne sounded right at home in this company; she had long ago proven her major-league chops, and anybody drawn to her music comes away wishing that she'd been able to record much more in jazz settings like the one heard on this 1959 Warwick LP, titled A Girl and Her Guitar (the title giving further evidence, however, that Osborne could not completely escape the "girl gimmick" marketing angle).

Feeling that she had perhaps settled into too comfortable a groove with her jazz playing, Osborne began six years of classical-guitar lessons in the 1960s. In 1ater years she and her husband ran a company that made guitars and amplifiers. Living in Bakersfield, California, Osborne continued to play jazz locally and taught at Cal State as well as a school for blind children. In 1977 she joined pianist Marian McPartland on an album of all-women musicians called Now's the Time, and in 1981 she made a new trio recording for Stash Records. Her later playing still revealed traces of Charlie Christian's influence, but also that she had continued to refine that influence and her early, aggressive swing sound into something subtle and unique. In 1990 she took the stage with Lionel Hampton at the Playboy Jazz Festival and by most accounts stole the show. Less than two years later she passed away at the age of 70.

"Never once in my life did I say, â€˜I'm not going to play-I'll just become a housewife," Osborne told Linda Dahl. She said it helped to be married to a musician who understood her drive, because

it's hard to say, â€˜Look, I'm not going to pay any attention to the children today,' or â€˜The house needs cleaning but I have to practice nowâ€¦" To jazz historian Sally Placksin she said, "I really feel I've had a charmed life. That's because I've done exactly what I was born to do; I wanted to be in music and I was.

More About Mary and Others

Special thanks to John Gouge and to the Emily Remler website AllThingsEmily.com.

An extracted clip of Osborne's solo: