Last Of The Lions: Gerald Wilson 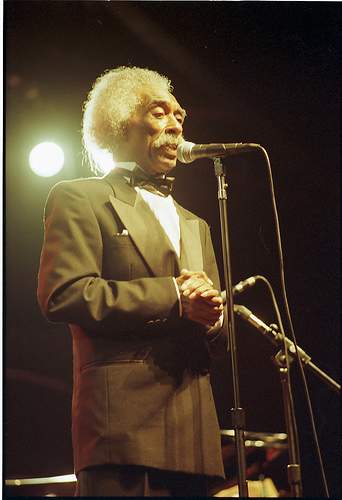 Gerald Wilson, who died September 8, 2014 at the age of 96, led big bands and recorded albums from the height of the swing era into the first years of the 21st century. Last Of The Lions: Gerald Wilson features two of his most significant outfits: a modernistic 1940s powerhouse that included up-and-coming musicians such as trumpeter Snooky Young and trombonist Melba Liston, and an all-star 1960s West Coast unit that highlighted soloists like tenor saxophonist Harold Land and guitarist Joe Pass.

Both bands exemplify the Wilson sound: layered, harmonically rich, and drawing on influences that range from Duke Ellington and 20th-century classical to traditional Mexican music.

A few years ago Mosaic Records issued a great anthology of Wilson's 1960s big-band recordings, with insightful liner notes by longtime jazz critic Doug Ramsey. It's now out of print, but for an excellent single-CD sampler from the same period, check out the relatively recent Gerald Wilson: The Artist Selects compilation, which covers the same era and includes brief remembrances of the pieces by Wilson himself.

Correction: In the show I say that Wilson's 1945 arrangement of "Out of This World" was never recorded commercially. While it's true that the song was never recorded by the 1940s band, Wilson's 1960s orchestra revisits the arrangement on the album Everywhere, included in the Mosaic set mentioned above. The version used on the program is a 1945 Jubilee radio broadcast.