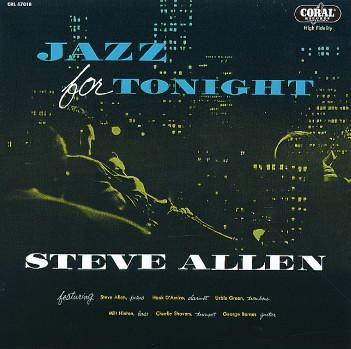 Jazz of all trades: Allen's jazz activities included a run of albums featuring him on piano throughout the 1950s and 60s.

Steve Allen is remembered today primarily as the first host of The Tonight Show, which debuted on NBC in September 1954.  With his quick wit, broad knowledge, conversational ease, showbiz savoir-faire, and variety of musical guests, interviews and comic sketches, Allen set the template for late-night TV that continues today.  Johnny Carson’s “Carnac the Magnificent,” Jay Leno’s “Jaywalking” segments, and David Letterman’s crazy stunts are just a few of the late-night tropes that can be traced back to Steve Allen’s programs of the 1950s and early 60s.  The Smothers Brothers, Lenny Bruce, Steve Martin, and numerous other comedians got big breaks from Allen and cited him as an influence.

But Allen was also a pianist and songwriter, who was once listed as the Guinness Book Of World Records’ most prolific composer.  His songs were recorded by Nat King Cole, Sarah Vaughan, Bing Crosby, Mark Murphy, and other notable singers.  And he was a great lover of jazz, who championed the music through his TV broadcasts and other outlets, when jazz was still struggling to gain cultural respect.  He showcased numerous jazz artists, both famous and lesser-known, many of them Black musicians such as Miles Davis, Art Tatum, Mary Lou Williams, and Count Basie.  He played the role of bandleader and clarinetist Benny Goodman in a biopic and collaborated with novelist Jack Kerouac on an album of jazz and poetry.  On this edition of Night Lights we’re celebrating the jazz legacy of Steve Allen.

Allen was born December 26, 1921 to parents who were a vaudeville team.  Allen’s father died when Allen was only 18 months old, and he spent his childhood with different relatives, attending 18 schools in all.  He got his entertainment start in radio on the West Coast in the 1940s, and also began writing songs. Here’s the 1940s Nat King Cole Trio performing one of Allen’s first songs to ever be recorded, “An Old Piano Plays The Blues":

Though Allen would go on to write literally thousands of songs, he made his mark as a host, first on radio and then on television.  In 1954 he was at the helm for the debut of what would become NBC’s The Tonight Show.  There and on subsequent nationally-broadcast programs, Allen established himself as a gifted ad-libber, a well-versed conversationalist, an entertainer with a propensity for wild gags and stunts, and a competent pianist who welcomed a wide array of musical guests.  Allen booked Elvis Presley when Ed Sullivan was still refusing to put the young rock ‘n roll singer on; after Allen walloped Sullivan in the ratings that night, Sullivan had a change of heart.  Singers Andy Williams and Eydie Gorme and Steve Lawrence got their start as regulars on Allen’s program.  His comic support included such up-and-coming talents as Don Knotts and Tim Conway.  The Muppets made their debut on Allen’s show in 1956.  Allen was what you might call today an “influencer,” and that influence extended to his spotlighting of numerous jazz artists. In June of 1955 he welcomed Art Tatum, generally considered one of the greatest pianists in jazz history, engaging Tatum in conversation about his style and even joining him on piano--albeit with some understandable trepidation--for a performance of "Fine And Dandy."  (You can hear the conversation and the performance in the audio link to the show above.)

A few months later Allen introduced another, younger jazz artist to his audience who was on the verge of blossoming into stardom—Miles Davis.  The day before the broadcast, Davis had taken what came to be known as his "First Great Quintet," with saxophonist John Coltrane, pianist Red Garland, bassist Paul Chambers, and drummer Philly Joe Jones, into the studio for the first time.  Many years later Davis, not known for easily dispensing compliments about prominent media celebrities, would compare Allen favorably to other talk-show hosts in his autobiography, writing that “Steve was the only one… who knew a little something about what I was doing.  At least Steve Allen tried to play the piano and could ask intelligent questions.”  Here’s Steve Allen with Miles Davis on the Tonight show in 1955:

That same year Allen had to present his show from Hollywood for a few weeks while he took on the starring role in The Benny Goodman Story, a jazz biopic of the famous bandleader that included notable Goodman sidemen such as drummer Gene Krupa, pianist Teddy Wilson, and vibraphonist Lionel Hampton, and featured Donna Reed as Alice Hammond, the woman who would become Goodman’s wife.  Goodman dubbed in Allen’s clarinet parts. Here’s a brief excerpt from the film:

In addition to playing a jazz star in the movies and hosting many others on his TV show, Allen sometimes showed up with a broadcast crew at places where jazz artists performed.  In July of 1956 he did one of his live remote segments, walking into New York City’s iconic Birdland jazz club and joining Count Basie and his band onstage, all as the camera followed him:

Throughout this busy period Allen continued to write songs, and one became his signature song.  The performance of it that we’re about to hear was done in a single long, extraordinary shot for television in 1958.  Allen left the program’s main stage and walked the back hallways of the Burbank studio singing the song as show regulars Eydie Gorme and Steve Lawrence joined him, as well as Dinah Shore, Ann Sothern, and a reasonably convincing Frank Sinatra impersonator, eventually returnning to again face the audience as the song concluded.  Here are Steve Allen and friends performing “This Could Be The Start Of Something Big":

Allen saw television, still a young medium in the 1950s, as an important venue for presenting jazz (and his highlighting of numerous Black artists was highly unusual for that era).  In 1955 he told writer George Simon, "Jazz doesn't have a general acceptance on TV any more than it does outside of TV.  Therefore, I try to ease it on.  I like to explain ahead of time what's going to happen... I don't mean a long, drawn-out exposition.  I just like to give them a little background--you might call it sort of a reason for our presenting jazz.  When (Dave) Brubeck was on, for example, I did an introductory eight minute bit on the history of jazz piano playing, which led us right into Dave's music."

Allen's love of jazz branched out in multiple ways.  In the early 1950s he contributed a column called "Songs For Sale" to the jazz magazine DownBeat.  He published a humor book, Bop Fables, that filtered classic children's stories through the language of bebop hipsterism.  In 1958 he narrated and helped put together The Story Of Jazz, a three-LP set that attempted to tell the history of the music in one fell swoop, right up to modern times. (You can hear several excerpts in the audio link to this program at the top of the page.)

Allen’s jazz outreach extended into literary realms as well, particularly through the friendship he developed with writer Jack Kerouac.  Kerouac’s landmark novel On The Road had just been published in the autumn of 1957 when Allen caught him at New York City’s Village Vanguard jazz club, doing poetry readings onstage. Allen suggested that he accompany Kerouac on piano, and their collaboration led to a 1958 album Poetry For The Beat Generation.  Kerouac would appear on Allen’s TV show the following year, reading excerpts from On The Road and his then-unpublished novel Visions Of Cody:

I mentioned earlier that Allen’s voluminous songwriting output landed him in the Guinness Book of World Records, and that his shows served as career launching pads for singers Andy Williams and Eydie Gorme and Steve Lawrence.  Let’s hear some of Allen’s songs now that met with commercial success, including recordings by vocalists Nat King Cole and Sarah Vaughan, as well as this chestnut from Bob Crosby’s 1930s band that Allen fitted with lyrics in the 1950s--Bing Crosby and Rosemary Clooney teaming up on “South Rampart Street Parade":

Allen was also the author of the popular Christmas song “Cool Yule,” recorded by Louis Armstrong in the early 1950s:

Allen kept up his busy pace throughout the 1960s, hosting several different TV programs, most significantly an early 60s show sponsored by Westinghouse that counted the teenaged David Letterman, Harry Shearer, and Robin Williams among its fans.  Allen also financed the 1962 TV show Jazz Scene U.S.A., hosted by singer and songwriter Oscar Brown Jr.; though the show aired only 26 episodes, it later gained historical significance.  Allen also continued to make records himself, collaborating with vibraphonist Terry Gibbs on an album that attempted to fuse jazz and rock ‘n roll.  He wrote the score for a spy film called A Man Named Dagger; here’s Allen’s recording of the title theme:

Allen continued to pursue a variety of television projects throughout the 1970s and 80s.  He created a PBS show, Meeting Of Minds, that featured actors and actresses portraying famous people from history having roundtable discussions about various subjects.  Allen wrote the scripts, drawing on his wide reading of classical literature and philosophy.  His frequent recording activity slowed greatly in the last 30 years of his life, but he did make an album in 1993 for the Concord label with a supporting cast of well-respected jazz musicians such as guitarist Howard Alden and clarinetist/saxophonist Ken Peplowski.  He received numerous awards as well as accolades from younger TV hosts and comedians for his pioneering work in their realm; on the 40th-anniversary broadcast of The Tonight Show in 1994, Jay Leno actually kneeled and kissed Allen’s ring in gratitude.  Allen died on October 30, 2000 at the age of 78. Though his legacy will always rightly be centered around his influence as a late-night television host, jazz fans can be thankful for the passionate support he gave to the music for decades in various ways.

An episode from A & E's Biography series devoted to Allen:

The national debut of Allen's Tonight show in 1954:

David Letterman saluting Allen in 1986 at the Television Academy Hall of Fame: