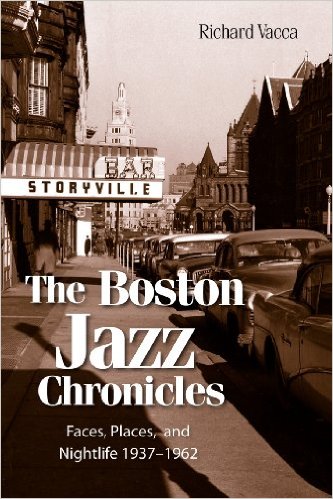 In 1950 25-year-old jazz pianist, fan, promoter, and Bostonian George Wein opened a club in Boston called Storyville, named after the legendary red-light district in New Orleans that some thought of as the birthplace of jazz. For the next 10 years Storyville would play host to some of the biggest names in jazz and some of Boston‘s most talented local musicians as well. On this edition of Night Lights we'll hear some of those artists, such as Charlie Parker, Stan Getz, Billie Holiday, Dave Brubeck, and Erroll Garner, and we'll talk with jazz historian Richard Vacca, author of The Boston Jazz Chronicles, about why this place has passed into jazz legend.

Performances at Boston‘s Storyville nightclub were sometimes broadcast on local radio station WHDH, and recordings of these shows have left us an audio record of the music that transpired at what Vacca calls "Boston nightlife‘s brightest star." Vacca cites several reasons for the club's success:

The first was the level of talent-everybody who was in jazz passed through the doors of Storyville, some of them many times. The second reason was George Wein himself... George was a dynamo. He was on the radio, he was in the newspapers, he was a spokesman for jazz, he was doing amazing things. Another thing that impressed me about the club was that it wasn't just the name bands; Storyville was also a place that gave opportunities to the local musicians, and in Boston that was a significant number of people.

Vacca also praises the club's atmosphere: "It was a listening room, it wasn't a bar that had music. There was a great deal of respect on the part of Wein and his staff for the people on the bandstand and the people who were listening to the music."

When it started, Storyville showcased what was often called Dixieland, or traditional jazz. Some early broadcasts include George Wein himself on piano, backing performers such as soprano saxophonist Sidney Bechet and singer Lee Wiley:

Storyville‘s first years saw a temporary closing and relocation after Wein encountered problems in his business relationship with the Copley Square Hotel‘s owner, but after a two-year stint at the Hotel Buckminster, Storyville returned to Copley Square. The style of music presented at Storyville also changed, as Wein began to bring in more modern, mainstream jazz acts. "George mixed it up," says Vacca. The club began to feature up-and-coming stars like saxophonist Stan Getz, and veteran performers such as Billie Holiday:

Storyville also received good notices in the jazz press. "Club Storyville is as near to perfection as any jazz club that I have ever seen," Bill Coss proclaimed in a September 1952 issue of Metronome. Coss took delight in the drinks named after jazz musicians, and praised what he called "the dignity that Wein gives to jazz through his lighting and programming." That dignity was also conveyed over the airwaves on radio broadcasts from the club by an announcer named John McLellan, who set the scene for his audience by evoking the sophisticated, listening-room vibe that Wein had established for the club. Jazz critic and radio host Nat Hentoff also introduced some of the performers.

The West Coast Comes To The East Coast

Storyville owner George Wein was a busy man in the 1950s, launching the long-running Newport Jazz Festival, starting a Storyville record label, and adding a second, supplementary club called Mahogany Hall in order to continue featuring traditional jazz. Storyville was also involved in an unusual youth organization called the Teenage Jazz club. "The Teenage Jazz Club was started by Father Norman O'Connor and John McLellan so that kids who weren't old enough to drink could get to hear jazz music in an adult setting," says Vacca:

The meetings were extraodinary, because Storyville artists would do a set for the kids, and at intermission the kids could go to the bar and buy soft drinks. (Future jazz writer) Dick Sudhalter and (future pianist) Steve Kuhn were members. I think the membership peaked in 1956 at 650 or 660 members... and it went for as long as Storyville went. They'd have their meetings on Friday after school once a month, and it cost a buck to get in, and for this you got lectures and music and entertainment, and met people... I wish I had had a Teenage Jazz Club when I was a kid.

Here's Mulligan at Storyville in December 1956 with Bob Brookmeyer on trombone, Bill Crow on bass, and Dave Bailey on drums:

The Dave Brubeck Quartet was another ascending jazz act with West Coast roots that found favor at Storyville, with their cool-cerebral jazz a perfect fit for the club's listening-room vibe. In his 1953 DownBeat writeup about the club Nat Hentoff said it was the group‘s favorite spot to play on the East Coast:

As the 1950s ended, so did Storvyille. Younger listeners were turning more and more to folk music and rock 'n roll, and in his autobiography Wein also cites self-inflicted economic wounds from the Newport Jazz Festival as another reason for his exit from the club. Vacca notes that "some of the most popular entertainers in the Storyville universe were suddenly gone. Erroll Garner was playing concert halls, Dave Brubeck was playing concert halls." Attendance at the club in the 1959-1960 season was so bad that Wein had to cancel most of the spring shows.

Storyville carried on under different ownership in a new location for another year and a half, but the era that had made it such a prestigious name in the jazz world had closed, though Wein would continue to play a major role in the presentation of the music for decades to come. For those of us today, there are still a number of recordings that bring the past to the present. Wherever you are with your radio, computer, or cellphone, we hope, as Boston DJ John McLellan used to say, that "you‘ll imagine that you‘ve just stepped into Storyville, you‘ve been seated at a table, and now you‘re ready to listen to..." Billie Holiday, Chet Baker, Stan Getz, Gerry Mulligan, Dave Brubeck, Charlie Parker, and some of the other great musicians who once played in this legendary room.

Stepping Out To Jazz Clubs Of The Past On Night Lights

Special thanks to Richard Vacca.