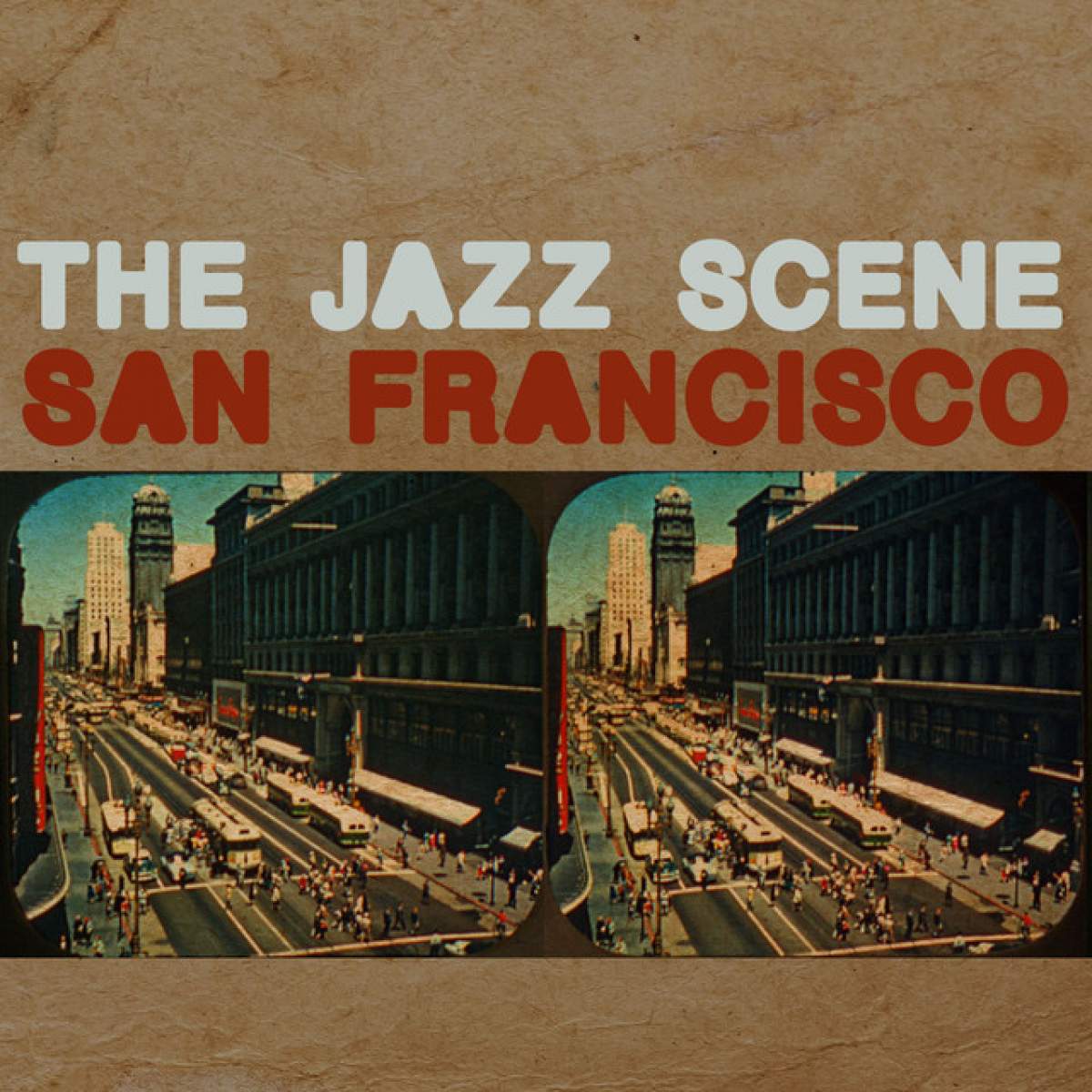 San Francisco has been a hub of jazz since the early 20th century and the days of the Barbary Coast, with artists such as Dave Brubeck, Vince Guaraldi, John Handy, and Cal Tjader contributing to its rich musical legacy, as well as clubs like the Blackhawk and Keystone Korner. We'll hear music from those artists and venues and more in the next hour, as well as a reading by writer Jack Kerouac that evokes the city in the years following the end of World War II.

"Fog, Irish coffee, cable cars, hills, pretty girls, bridges, crazy restaurants, and jazz. That's what people think of when they hear ‘San Francisco.'" So wrote Ralph Gleason in a 1960 issue of DownBeat Magazine, in which he also noted that the word "jazz" had first been used in a San Francisco newspaper, shortly before World War I began. Since then the city has served as a birthplace or launching pad for numerous jazz artists, venues, record labels, radio stations, and writers of note, making a vibrant contribution to San Francisco's cultural legacy. Long before it was a center of the psychedelic counterculture and its attendant rock groups, San Francisco was a West Coast haven for the development of jazz.

One thing many people might not think of when they think of San Francisco is New Orleans jazz—but in the late 1930s and 40s the city was a hotbed of trad jazz, a capital of the New Orleans Revival, and its mayors were surely trumpeter Lu Watters and trombonist Turk Murphy. Watters formed the Yerba Buena Jazz Band in 1939, but the city's appreciation for the original New Orleans sound can be traced back to the 1920s, late teens and even the Wild-West years of the Barbary Coast era, when musicians such as Jelly Roll Morton and King Oliver either played or migrated to the city. After being rediscovered in the early 1940s, legendary New Orleans trumpeter Bunk Johnson traveled to San Francisco to record with Watters' Yerba Buena band. That band held forth most frequently at the Dawn Club, where the motto was, "No Tune Played Written After 1929." Here's a 1946 airshot of the Yerba Buena band performing "Yerba Buena Strut" at the Dawn Club:

As New Orleans revivalism hit its zenith in the Bay Area, bebop was taking off on the East Coast. Though bebop found a home at the aptly-named Bop City club and in San Francisco's increasingly African-American Fillmore district, dubbed "the Harlem of the West," San Francisco seemed behind the curve to some; a 1947 DownBeat article by music writer Ralph Gleason, who would cover the city's jazz beat for years to come, was headlined "Music In San Francisco Is A Dead Duck." But a young pianist and his colleagues were about to change that.

Dave Brubeck, newly-returned from serving in World War II, enrolled at Mills College under the GI Bill and helped craft a modernistic sound for the Bay City area, first with his Octet and then with his trio, that anticipated or paralleled the rise of the 1950s Third Stream movement and Miles Davis' Birth of the Cool recordings. With saxophonist Paul Desmond, Brubeck would go on to form one of the most popular groups in jazz in the 1950s and 60s, landing on the cover of Time Magazine and recording a best-selling jazz masterpiece, Time Out-and it all started with a circle of young experimentalists in late 1940s San Francisco. In the Brubeck Octet's arrangements, jazz writer Ted Gioia finds that

the diverse classical, jazz, and popular-song elements blend in a manner that combines the best quality of each discipline: the strong melodic material of popular song is wedded to the broad harmonic palette of classical music, the resulting hybrid drenched in that irrepressible rhythmic vocabulary that only comes from jazz.

After its slow evolution towards modernism, the San Francisco jazz scene thrived with a proliferation of record labels such as Fantasy, clubs like the Blackhawk, DJs such as Jimmy Lyons, and homegrown artists like pianist Vince Guaraldi and vibraphonist Cal Tjader whose unique sounds gained wide popularity in the early 1960s. Guaraldi's engagingly lyrical brew of blues, bop, and boogie-woogie found its fullest development and exposure through the music he wrote and recorded for fifteen Charlie Brown TV specials in the 1960s and 70s, while Tjader became one of the city's earliest proponents of Latin jazz influences, culminating in his 1962 hit "Soul Sauce." We'll hear a Tjader combo at the Blackhawk in 1958 doing a Latinized version of Cole Porter's "I Love Paris," as well as this 1956 recording from the Guaraldi-led trio that often performed at San Francisco's Hungry I, a bohemian North Beach club that also played a role in the rise of comedians Mort Sahl and Lenny Bruce:

San Francisco has also been the setting for numerous popular songs, most notably "I Left My Heart In San Francisco," written in 1953 by two World War II veterans who'd moved to Brooklyn from the West Coast and were feeling homesick for their origins. It was pitched without success for eight years, until Tony Bennett's accompanist Ralph Sharon got hold of it. Bennett's recording of the song was originally released as the B-side of a January 1962 single, but DJs soon flipped the record and began playing the tune for which Bennett, and the city itself, are so widely known. We'll also hear Carmen McRae singing a lesser-known but differently-evocative song about San Francisco:

In addition to popular songs, San Francisco's cultural heritage gives place of pride to literary achievements, particularly the Beat movement of the 1950s. Poet Lawrence Ferlinghetti's City Lights Bookstore became a focal point for the Beats, fighting legal battles after its publishing imprint released Allen Ginsberg's Howl in 1956. Numerous Beat poets and writers either lived or spent time in the Bay Area, and their live performances became the stuff of legend. We'll hear Ferlinghetti himself in this next set reading with jazz accompaniment at the Cellar, a popular performance space for other poets such as Kenneth Rexroth and jazz musician Brew Moore; but first, here's Jack Kerouac reading from a piece he wrote in the early 1950s that conjures the city's atmosphere when Kerouac was a young, unknown novelist working as a railroad brakeman and living in a Frisco hotel: "October In The Railroad Earth":

The Beatniks presaged San Francisco's hippie and psychedelic movement of the 1960s, and jazz writer Ralph Gleason caught the changing vibe in an article proclaiming the city as America's Liverpool, with bands such as Jefferson Airplane and the Grateful Dead emerging from its growing countercultural movement. San Francisco saxophonist John Handy, already a veteran musician who'd played with Charles Mingus and recorded several albums as a leader, also reflected the times with his quintet, which caused a sensation at the 1965 Monterey Jazz Festival with its unusual blend of saxophone, violin, and electric guitar. The quintet's sound remained rooted in jazz but also appealed to younger rock audiences, and the following they'd developed at San Francisco's Both/And club blossomed into a wider popularity. From The 2nd John Handy Album, recorded in 1966, a year before San Francisco's Summer of Love, here's "Theme X":

San Francisco's jazz scene, like many others around the United States, fluctuated in the years from the 1970s to the early 21st century. Today the SF Jazz Collective organization and building enshrines an ongoing cultural commitment to the creation and performance of jazz-a commitment that was most embodied in the 1970s and early 80s by promoter Todd Barkan's Keystone Korner club, described by its owner as "a bona fide psychedelic jazz club that emerged out of the post-psychedelic era in San Francisco—right out of flower children and Haight-Ashbury." Just down the street from a police station—hence its Keystone-Cops-inspired name—Barkan's club became known as "the Birdland of the West" for its ongoing presentation of top-notch jazz talent. Keystone Korner will be the sole subject of a future Night Lights program; I'll end this one with a 1973 performance from the club featuring Rahsaan Roland Kirk:

Playland At The Beach: Dave Brubeck's Early Octet And Trio

Jazz From Monterey: 1958, The Birth Of A Festival

The Jazz Scene: San Francisco (CD that documents some of the mid-1950s players)