Q Is For Jazz: Quincy Jones 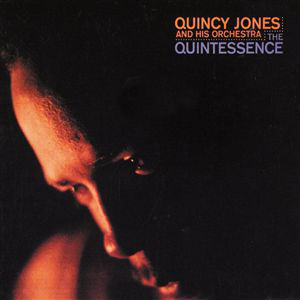 Quincy Jones is one of the most successful producers in the history of popular music-and he began as a jazz artist. On this edition of Night Lights we‘ll hear music from the early years of Jones‘ career featuring his arrangements and compositions with Clifford Brown, Dinah Washington, Dizzy Gillespie, Count Basie, Sarah Vaughan, and Peggy Lee, as well as Jones leading his own big band in the late 1950s and early 1960s.

Quincy Delight Jones, or "Q" as Frank Sinatra would later dub him, was born March 14, 1933 in Chicago and spent much of his adolescence in Seattle, Washington, where he took up the trumpet and befriended a fellow musically talented teenager named Ray Charles. It was the start of a musical career that would first lead him to fame as an arranger and writer in the jazz world of the 1950s, and on to the world of pop music and television and movies, playing a key role in Michael Jackson‘s blockbuster albums Thriller and Off The Wall, composing numerous movie and television themes, and generally leaving his stamp all over popular music of the last 60 years--racking up 29 Grammy awards in the process.

Jones began in the big-band world of the late 1940s, honing his trumpeting skills with help from Clark Terry; after attending Berklee College in Boston, he played and worked as an arranger for Lionel Hampton in the early 1950s. From there Jones would go on to greater fame collaborating with artists such as Dinah Washington, Dizzy Gillespie, Count Basie, Frank Sinatra, Ella Fitzgerald, and Peggy Lee, and to eventually broaden his scope beyond jazz. Shortly before Duke Ellington died in 1974, he signed a photograph for Jones with "To Q, who will de-categorize American music"…a heady prediction that some think Jones has come close to fulfilling. But whatever the outcome of Jones‘ musical mission, it began in the world of jazz.

An early notable landmark in Jones‘ journey occurred while he was touring Europe with Lionel Hampton‘s orchestra in 1953. Jones was one of numerous talented young musicians in a band that included trumpeters Art Farmer and Clifford Brown, as well as saxophonist Gigi Gryce. In spite of Hampton‘s forbidding any recording outside of the band‘s scheduled activities, his energetic proteges routinely managed to sneak out of their hotel for late-night sessions. The 20-year-old Jones was a key figure in organizing these sessions and contributed material to them as well, including this composition that became a jazz standard:

Trumpeter Clifford Brown performing Quincy Jones‘ composition "Stockholm Sweet‘nin," named after the city in which it was recorded in 1953, with Brown joined by fellow trumpeter Art Farmer and the Swedish All-Stars, on a date supervised by Quincy Jones. When Brown died at the age of 25 in a car crash three years later, Jones penned a moving tribute to him for DownBeat Magazine, concluding "This would be a better world today if we had more people who believed in what Clifford Brown stood for as a man and a musician." In subsequent years he would often single out Brown‘s solo in the recording we just heard as one of his favorite improvisational moments on record.

The sessions with Brown and others in Europe started Jones on a path ultimately much more fruitful than that of trumpet-playing, an area in which Jones felt his skills to be average. He would find his calling instead as a bandleader, arranger, composer, and musical supervisor, as well as a savvy navigator of the music business. Another key development was his work with singer Dinah Washington on her 1955 album For Those In Love. The story goes that Washington suggested Jones to her label bosses at Mercury, who replied that they wanted a "name" producer, to which Washington responded, "Okay, here‘s a name: Quincy Jones." The album was a hit, and Jones went on to record nine more albums with Washington, as well as developing a strong friendship that turned into an affair for awhile. Dinah Washington performing Quincy Jones‘ arrangement of "They Didn‘t Believe Me" on Night Lights:

Dinah Washington and "They Didn‘t Believe Me," from her 1956 album Swingin' With Miss D-the orchestra arranged and conducted by Quincy Jones. That same year Jones served as musical director for Dizzy Gillespie‘s big band, which was touring the Middle East and South America on behalf of the U.S. State Department. The band also made some studio recordings, including Jones‘ composition "Jessica‘s Day", named after one of jazz writer Nat Hentoff‘s daughters. In Raymond Horricks‘ 1985 biography of Jones, he cites this piece as an example of how Jones "can write a brilliantly detailed score that appears to the casual listener to have a simple spontaneity…(with the) small, trumpet-led ensemble set against the larger ensemble which introduces the theme of ‘Jessica‘s Day."

Jones‘ experience as musical director for the Gillespie orchestra helped spur his own first-time studio outing as a big-band leader that year on This Is How I Feel About Jazz, an album that some critics consider to be his jazz masterpiece. Using some of the same personnel that he had enlisted for the Gillespie State Department tour, Jones made his first major musical statement under his own name. In notes he wrote for the album, Jones said "This is an attempt on my part to supply the settings, select the proper cast and musically portray my feelings about some of the less cerebral and more vital and/or basic elements contained in jazz. Trying to put into words the essence of these elements has made me realize that jazz is much easier to play than to say."

In 1957 Jones moved to Paris, working as a musical director for the French-based label Barclay Records, and studying with French composer Nadia Boulanger; he would later credit the instruction he received for helping him to take up film-score orchestration. That instruction also undoubtedly served him well when he took on the task of arranging and conducting a 55-piece orchestra for an album he recorded in Paris with singer Sarah Vaughan in 1958. In addition to his enhanced musical knowledge, Jones also brought a score given to him by pianist Erroll Garner, who had written and recorded it as an instrumental in 1955; now lyricist Johnny Burke had added words. From Vaughan And Violins, here‘s Quincy Jones‘ arrangement of a song that would become a standard when Johnny Mathis recorded it the following year---but Sarah Vaughan and Quincy Jones got there first. "Misty," on Night Lights:

Around this time Jones also wrote an album‘s worth of material for the Count Basie Orchestra, an ensemble that he admired greatly and would work with again in subsequent years. His composition "For Lena And Lennie" was dedicated to his friend singer Lena Horne and her husband Lennie Hayton, an interracial couple in a still-fiercely-segregated America; the couple returned the favor three years later by writing the notes for Jones‘ album The Quintessence. Jazz writer Brian Priestley praises Jones‘ composition and arrangement for what he calls its "stealthy tempo and phrasing."

By the late 1950s Quincy Jones was so busy that he began to farm out some of his arranging work to other musicians, providing bare-bones charts or sketches for them to fill out. The musicians were paid, as was Jones, whose name appeared in the subsequent album credits. Jones‘ primary ghostwriter, as such contractors were called, was his assistant Billy Byers. One thing Jones couldn‘t farm out was his galvanizing presence in the studio. As Bob Freedman, another one of Jones‘ ghostwriters, told jazz biographer James Gavin, "His skills at organization, motivation, and direction were tremendous. Much like Duke Ellington, he knew just how to cheerlead and get the best performance possible from the guys."

Jones‘ skills were put to the supreme test when he assembled a big band at the end of 1959 that included top-notch musicians such as trumpeter Clark Terry, trombonists Melba Liston and Jimmy Cleveland, and saxophonist Phil Woods. The band seemed to have a great opportunity in Europe, performing as on-stage musicians in period costume for the Harold Arlen-Johnny Mercer musical Free And Easy. But the show received poor notices and was aborted before it even finished its pre-Broadway European tour. Jones and the band elected to stay on the Continent and played to good audiences and reviews for the next seven months, then returned to the States--Jones having suffered significant financial losses, and also exhausted from the toll of trying to sustain his organization.

After another visit to Europe and a return to America, the orchestra effectively disbanded. In 1962 Jones talked about the life and death of this orchestra with Leonard Feather in a DownBeat article titled, "How To Lose A Big Band Without Really Trying." "Everybody involved became like brothers and sisters," he told Feather. "It was a fantastic experience. And it was something that couldn‘t have happened, musically or sociologically, in the States." In answer to Feather‘s question of whether he‘d do it all over again or not, Jones said, "I‘d shoot myself."

After Jones‘ big band met its demise, he resumed a busy pace in America, taking a job at Mercury Records and continuing to arrange, produce, and record in the jazz world. He also once more established a professional relationship with a vocalist that turned into a romantic one as well, this time with singer Peggy Lee, helming her 1961 album If You Go and a 1962 followup with a geographical theme, Blues Cross Country. In addition to serving as arranger and orchestra conductor, Jones helped Lee write some of the album's songs, such as "New York City Blues":

Quincy Jones was still a year shy of 30 when Blues Cross Country came out, already a veteran of the music business, with many of his greatest accomplishments still ahead of him. In the early 1960s he became one of the first African-American music industry executives, serving as vice-president of Mercury Records. He notched his first crossover success as a producer with Lesley Gore‘s "It‘s My Party." He collaborated again with Count Basie on recordings made with Frank Sinatra, and began to write film scores and television music as well, including the theme for the popular 1970s sitcom "Sanford And Son." By the mid-1980s the world knew him as the producer of Michael Jackson‘s blockbuster albums Off The Wall and Thriller. All of Jones‘ musical roads, however, lead back to his jazz origins. In 1985 he told a DownBeat interviewer, "I wouldn‘t trade the era I came up in for anything." He had also by then fulfilled a goal he‘d stated in a prior DownBeat article 25 years earlier: "All the musicians moan about the level of American popular music, but all they do is moan about it. They wouldn‘t think of going into it to improve it. Well, I‘m going into it." We‘ll close with two of Jones‘ most popular compositions from his early jazz era-"Soul Bossa Nova," which gained renewed fame decades later when it was used as the theme for the Austin Powers film comedies and the 1998 world soccer tournament-and a ballad that Jones co-wrote with singer/lyricist Henri Salvador while he was living in Europe in the late 1950s, eventually recorded by such jazz luminaries as Count Basie, Benny Carter, and Johnny Hodges with Duke Ellington. Quincy Jones and "The Midnight Sun Will Never Set," on Night Lights: