Jazz Is Not A Noun: Don Shirley, The Extraordinary Pianist 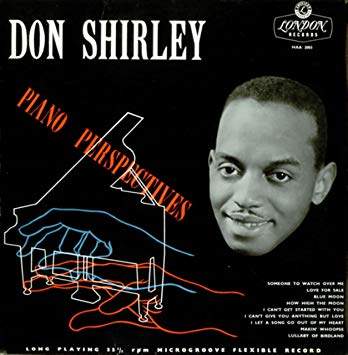 Don Shirley combined classical, jazz, and spiritual influences on the many recordings he released in the 1950s and 60s, making him a pianist beyond easy definition. A forgotten figure in recent years, he‘s come back into the limelight as a result of the Oscar-winning movie Green Book. On this edition of Night Lights we‘ll hear some of his recordings, including an early 1960s hit, some standards as well as his own compositions, and a 1955 concert collaboration with Duke Ellington, and we'll learn more about his background and career.

In 2019 the movie Green Book received five Oscar nominations, including one for Best Picture, and won several other film industry awards as well. It also ignited controversy over its portrayal of African-American pianist Don Shirley and his friendship with an Italian-American driver who accompanied him on a concert tour of the American South in the early 1960s. Green Book has stimulated a great deal of interest in Shirley, who died in 2013 at the age of 86. But even before Green Book, Shirley had present-day admirers, among them jazz pianist and blogger Ethan Iverson:

I'm a Don Shirley fan from way back. He's a complex character, someone who was determined to work against type. A beautiful musician almost wholly committed to European forms despite being born Black. His sound could only have been made in mid-century America.

(UPDATE: Iverson has now written an excellent article about Shirley's music for the New Yorker)

The son of Jamaican immigrants, his father an Episcopalian priest and his mother a teacher who was of English and German heritage, Shirley was born on January 29, 1927 and grew up in Pensacola, Florida. A highly-gifted individual who eventually became fluent in several languages, Shirley was a classical pianist prodigy who made his debut with the Boston Pops at age 18, performing Tchaikovsky‘s Piano Concerto 1 in B-Flat Minor. He studied composition at Catholic University in Washington. His first original composition was performed by the London Philharmonic Orchestra in 1946, and he began to tour on a wide basis.

But when Shirley was in his early 20s, a notable promoter advised him to pursue a career in jazz and popular repertoire, warning that his race would be a professional hindrance in the classical world. Shirley took his advice, even though he despised playing in nightclubs. In the early 1950s he studied psychology in Chicago and continued his playing; a July 1953 DownBeat listing for available combos describes him as "pianist boasting huge repertoire, has played such New York spots as Café Society, Blue Angel, and La Vie En Rose." He also received a grant to study the relationship between music and juvenile crime, and had students gauge audience reaction to different tonal combinations as he performed. In 1954 he returned to New York and played the popular Embers nightclub for 24 weeks, as well as Basin Street, where he met and befriended Duke Ellington. In 1955 he began a remarkable run of records for the Cadence label:

Shirley‘s mid-1950s prominence was heightened by a TV appearance on The Arthur Godfrey Show. He also commanded some glowing endorsements on the back of one of his LPs from composer Igor Stravinsky, who said "His virtuosity is worthy of gods," jazz DJ Al Jazzbo Collins, who wrote liner notes for several of Shirley‘s albums, and singer Sarah Vaughan, who said "Shirley has the most glorious sense of shading, phrasing and balance I‘ve ever heard."

But Shirley did not like being thought of as a jazz pianist. In 1982 he told a New York Times reporter,

Late in his life he was interviewed by jazz researcher and Gigi Gryce co-biographer Noal Cohen about his early days in Pensacola when he and the future saxophonist crossed paths. Shirley started out by stating that he didn‘t even know how to play jazz but said he loved the music and had known everyone notable who‘d played it. He added, "I hate the word jazz, number one because the whole damn country uses it as a noun. It‘s not a noun. It‘s an adjective." "The whole society is determined to make me jazz for one reason, Noal, and one reason only," Shirley said. "I was called jazz because I was black…And as a result, everything I trained for all my life until today has been thwarted because of this stupid racism." He also told Cohen that he preferred to be called "Donald" and that the Cadence record label had insisted on marketing him as "Don," much to his dismay.

Don Shirley was also DR. Donald Shirley, as a result of his degrees. A four-year-old child to whom he was introduced as a Doctor of Music replied, "What‘s the matter--is music sick?" In response Shirley composed "Atonal Ostinato Blues in B Flat," a piece that offered a playful jab at jazz artists whose classical-minded ambitions, in his view, outstripped their compositional abilities. We‘ll also hear music from Shirley‘s classical-oriented take on the Orpheus In The Underworld myth:

It seems appropriate that Shirley ended up living in one of the apartments above Carnegie Hall that served as a residential artistic haven for many decades. His recordings stood out partly for his unique blend of classical, jazz, and blues and spiritual elements, and also for the instrumental configurations that he employed, sometimes playing duo with a bassist, sometimes using both a bassist and a cellist, and often foregoing a drummer.

Shirley‘s ambivalent stance about the jazz world tended to be reflected back at him; jazz reviewers of the time, when they deigned to pay attention to his recordings, offered mixed opinions. New York Times jazz writer John S. Wilson wrote dismissively in his 1959 Collectors Jazz book that "occasionally Shirley seems to make a stab at jazz but it is clumsy and quite unswinging. Most of his work is overblown pseudoclassicism." Just a year later Charles Fox delivered a very different verdict in the book Jazz On Record, proclaiming Shirley to be

One of the most original talents to appear on the scene for some time and one of the most impressive pianists now recording. Although it has not been much noted, he has experimented more successfully in the direction of combining classical piano with jazz than Dave Brubeck or John Lewis. The phenomenal technique applied to ‘How High The Moon‘ makes it a unique and breathtaking performance.

Shirley did incorporate a great deal of jazz into his repertoire, but his recordings were shot through with classical influence, and he ultimately did perform as a professional artist with symphonies and composed classical works. He also enjoyed a spate of commercial success with the albums he released on the Cadence label that drew on standards, spirituals, and pop songs, and even scored a top-40 hit in 1961 with his version of an African-American traditional song that had previously been recorded by Paul Robeson and Odetta:

His popular cover of a Ray Charles hit featured Shirley on both piano and organ:

Though "Waterboy‘s" 1961 top 40 success was a highlight of Shirley‘s commercial popularity, and came at a time when he was touring constantly, he had already reached what surely must have felt like an artistic summit six years earlier, when he performed with Duke Ellington‘s band and the Symphony of the Air orchestra at Carnegie Hall. Shirley had appeared opposite Ellington‘s band at the Basin Street nightclub at the end of 1954 and had become friends with the renowned bandleader. Ellington returned Shirley‘s admiration and respect and invited him to play the piano part of an ambitious extended work called "New World a-Comin‘" that Ellington had debuted at Carnegie Hall in 1943. In March of 1955 the Ellington Orchestra, accompanied by the Symphony of the Air, returned to Carnegie Hall to perform an expansive version of "New World a-Comin‘" with Ellington conducting and Don Shirley at the piano:

The response to Shirley's performance was so enthusiastic that he returned for an encore, playing a medley of Ellington hits. He would remain friends with Ellington to the end of Ellington‘s life, composing a tribute to the Duke as well:

Don Shirley‘s life and career extended into the early years of the 21st century. He performed with numerous orchestras and wrote a wide variety of classical works, including a tone poem inspired by James Joyce‘s novel Finnegans Wake. In the late 1990s many of his 1950s and 60s albums were reissued on CD, and he released a new album in 2001 called Home With Don Shirley. Shirley‘s home would suffer a traumatic upheaval in 2010, when he and other long-time residents were forced to move after the Carnegie Hall apartments were remodeled for use as additional rehearsal and studio space. He died of heart disease on April 6, 2013 at the age of 86, and the New York Times‘ lengthy obituary called him a "Pianist Of His Own Genre" in its headline.

After the movie Green Book was released in late 2018, depicting Shirley‘s travels in the American South in the early 1960s, interest in the pianist surged. While the merits of the film have been debated, there‘s no doubt that it has given new life to his musical legacy, as an artist who navigated the constraints of his time‘s cultural and racial mores. A recent New York Times article identifies a key component of that legacy, stating that Shirley "argued for the importance of establishing an American concert canon, spanning African-American work songs, spirituals, the blues and Broadway tunes." In this Shirley was perhaps an expansive forerunner of Nina Simone. During a run of performances at the Cookery jazz club in 1982 he told a New York Times reporter,

I am not an entertainer. But I‘m running the risk of being considered an entertainer by going into a nightclub because that‘s what they have in there. I don‘t want anybody to know me well enough to slap me on the back and say, ‘Hey, baby.‘ The black experience through music, with a sense of dignity, that‘s all I have ever tried to do.

A trailer for an upcoming documentary about Shirley: