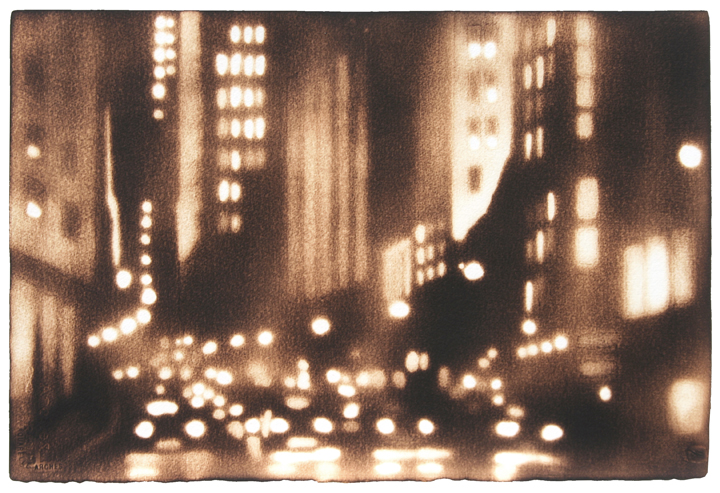 (A note of special thanks to artist Paul Chojnowski for permission to use images from his "Nocturnes" series in the program page's slideshow above.)

In classical music, the term nocturne dates back to at least the early 1800s, when it referred primarily to pieces written for solo piano. Frederic Chopinâ€˜s nocturnes are among the most noted of such pieces; later on, Claude Debussy and Bela BartÃ³k wrote nocturnal themes for larger ensembles.

Generally, nocturnes are meant to evoke dreamy night moods, though those moods may range from romantic to dark and brooding. Jazz artists, with their broad approach to music, have sometimes sought to emulate certain aspects of classical pieces, and the nocturne is no exception; there are numerous instances of "jazz nocturne" themes throughout jazz history.

Clarinetist Artie Shaw was often drawn to the idea of doing jazz pieces with classical overtones or allusions. He took his "Nocturne" from Thomas Griselleâ€˜s 1928 work Two American Sketches, and as one critic has pointed out, parts of it evoke George Gershwinâ€˜s "Rhapsody in Blue."

Glenn Miller's World War II Army Air Force Band was a musical powerhouse, a 60-piece ensemble that included a string section as well as top-notch jazz players like drummer Ray McKinley, clarinetist/saxophonist Peanuts Hucko, and Mel Powell, Benny Goodmanâ€˜s young pianist and arranger whoâ€˜d take a classical turn later in his career. As a member of Millerâ€˜s AAF orchestra, Powell got a chance to blend his jazz and classical interests on a piece titled "Neurotic Nocturne" (more commonly known as "Pearls on Velvet").

Bop-era artists seem to have been particularly attracted to moody, slower-paced nocturnes that gave off hints of classical modernism. Two such pieces come from lost-legend trumpeter Sonny Berman, a member of Woody Hermanâ€˜s big-band who died at the age of 21 from drug-related causes, and from trumpeter Howard McGhee, who managed to survive his own struggle with drugs to enjoy a reasonably long career. McGheeâ€˜s "Night Music" was recorded at a marathon session in December 1947 that included other young up-and-coming swing-to-bop-generation artists such as James Moody, Hank Jones, and Milt Jackson.

The 1950s pair, saxophonist/flutist Bud Shank and guitarist Laurindo Almeida, produced music that many consider the premonition of 1960s bossa nova. Like many of the other pieces Shank and Almeida recorded, Almeida's "Nocturno" is highly influenced by Brazilian folk music.

"Night Song" was the result of a 1939 small group date, led by Duke Ellingtonâ€˜s trumpeter Cootie Williams. The melody was co-written by arranger Jimmy Mundy and trombonist Juan Tizol, who authored several memorable pieces that evoked other lands for the Ellington orchestra, such as "Caravan" and "Pyramid."

Like many other post-World War II jazz artists, saxophonist and arranger Oliver Nelson was an admirer of the classical composer Bela Bartok. The title track of the 1960 album that he recorded for Prestige Recordsâ€˜ Moodsville series -- a series meant to be a kind of thinking-manâ€˜s lights-down-low jazz -- was called "Nocturne," deliberately alluding to the "night music" sections of Bartokâ€˜s work, and signaling the composerâ€˜s influence upon the piece.

Outtakes From the Commentary

The song has a relatively large amount of freedom, with the rhythm sectionâ€˜s warm introduction, and Joe Sampleâ€˜s floating pianistic phrases throughout the song. I was playing a quite open plunger on the melody, and saxophonist Wilton Felder was playing a fifth below me, which gave this tune a dark, yet moody effect. Notice the horse-like effect at the end of each chorus during the melody. Sort of a strange thing, isnâ€˜t it?