Jazz For After The Dentist: Cannonball Adderley And Bill Evans 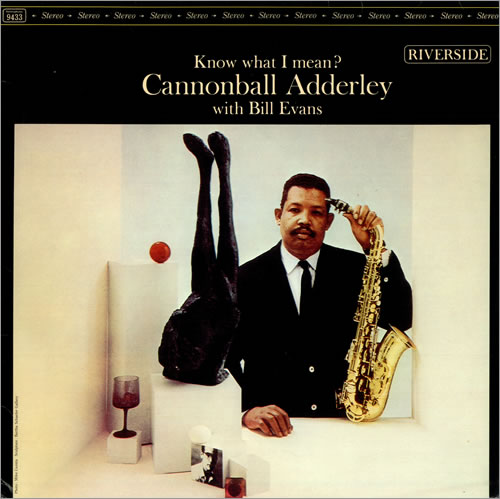 Most jazz lovers have favorite albums that they turn to for certain moods, times, or occasions-or just out of habit, because over the years that particular LP or CD has created some pleasantly well-worn grooves in one's listening state of mind. Such albums for me include Bud Powell's The Genius Of, John Coltrane's Complete Village Vanguard Recordings, and Bill Evans' Explorations. For some reason, whenever I return from the dentist's office (that inevitable destination and proverbial source of jokes about smooth jazz), it's another Evans record-made around the same time as Explorations, and officially led by saxophonist Cannonball Adderley-that I turn to: Know What I Mean?

Adderley and Evans had recorded together before-most notably as members of Miles Davis' group on Kind of Blue, but also in 1958 for Adderley's Riverside LP Portrait of Cannonball. Know What I Mean, though, was Adderley's attempt to strike out in a new direction. In his biography of Evans, Peter Pettinger writes that Adderley "wanted to make an album that would break away from his own popular soul style, as typified by his work with the pianist Bobby Timmons." Pettinger also quotes producer Orrin Keepnews as saying that it was Adderley's idea to employ bassist Percy Heath and drummer Connie Kay of the Modern Jazz Quartet as the rhythm section. Since all four musicians were members of high-profile, active working groups, the subsequent LP was recorded at three different sessions throughout the early months of 1961.

Know What I Mean? kicks off with Evans' composition "Waltz for Debby," which the pianist had recorded before only in abbreviated form; several months later he would lay down a classic version at the Village Vanguard with his vaunted trio-mates Scott LaFaro and Paul Motian. Heath and Kay give this "Debby" a punchier rhythm, with Adderley's alto adding some happy sass and sway to the affair. The quartet next takes up Gordon Jenkins' mournful "Goodbye," with Evans' solo offering a complex rumination on the sorrow and ambivalence of finite love. The lightly swinging "Who Cares?" captures the spirit of its Gershwin-authored title, while "Venice," composed by Heath and Kay MJQ bandmate John Lewis, proves to be a poignant vehicle for Cannonball. A festive "Toy" picks up the pace again; lately I've been listening to some of Evans' 1970s Fantasy work for the first time, and there's a certain sort of springy, chiming resonance in his playing here (in all of his playing from this period) that I miss in the later recordings. Jazz writer Joe Goldberg, referring to the album's next track "Nancy" (a 1940s hit for Frank Sinatra), described it as a rare pick for jazz musicians to interpret; within a year of this LP's release, guitarist Grant Green and saxophonist John Coltrane would each wax it, with Coltrane's version appearing on the now-classic Ballads (Green's would remain unissued until the 1980s).

The album concludes with a luminous, sparkling rendition of "Elsa" (written by Earl Zindars, a jazz and classical composer who also penned "How My Heart Sings," recorded by Evans in 1962) and the modal-piece title track, penned by Evans in the studio at Adderley's request, and the one side here that dials up the sound of the 1958-59, Miles Davis Kind of Blue band in which Adderley and Evans both served.

"The whole album is filled with the aura of relaxation," Goldberg wrote in the original liner notes, and perhaps that's one reason why I always enjoy listening to it after coming back from the dentist (or the emergency room, after a recent bicycle accident). It's relaxing not in a numbed-out, Novocaine way, but in a nice-to-be-alive kind of way. Adderley's lyricism and Evans' sense of swing were generally given short shrift, and those respective qualities shine on this unique convergence of the Cannonball Adderley Quintet, Bill Evans Trio, and Modern Jazz Quartet circa 1961.

For what it's worth, I heard no smooth jazz at the dentist's office today while one of my upper wisdom teeth was being extracted-only an alternative-pop-lite satellite station that played, among other things, Wilco's "Heavy Metal Drummer" and a slowed-down, countryfied cover of Kiss' "Rock and Roll All Night." I definitely had some time for the Wilco, but it was still nice to know that Cannonball and Bill awaited me at home.