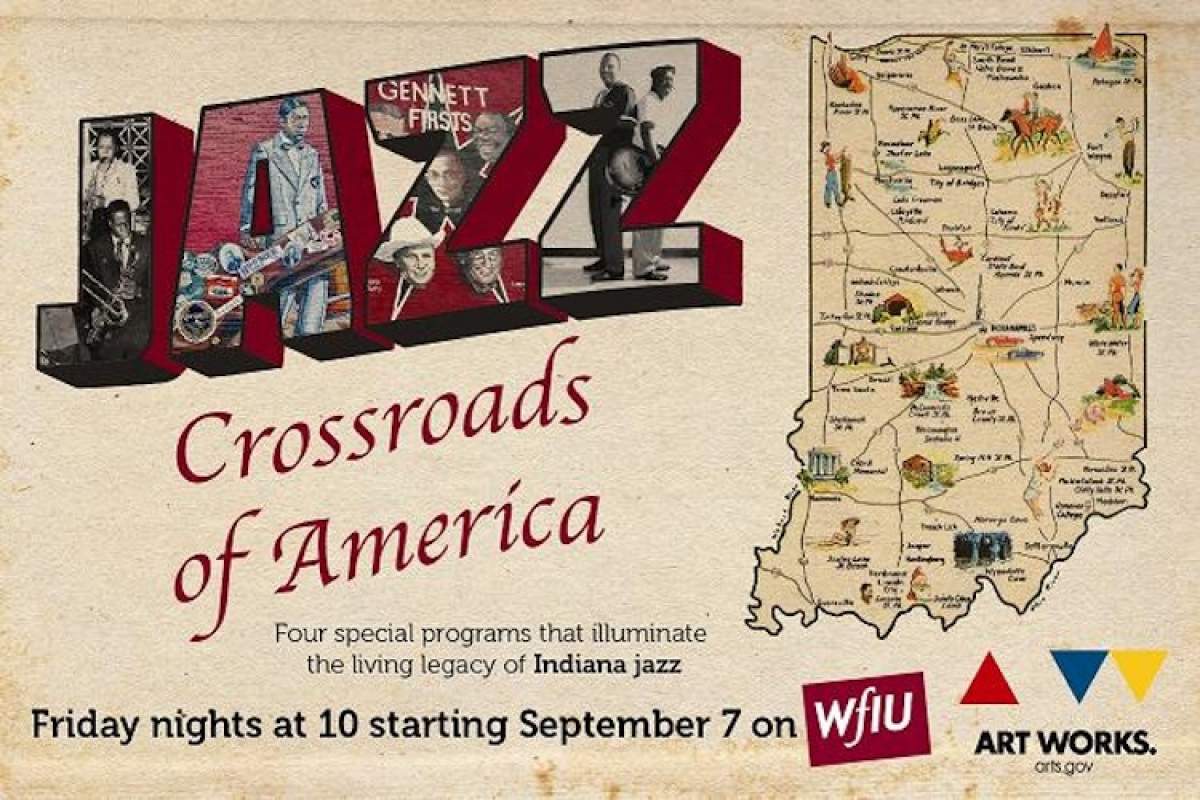 Most histories of American jazz focus on New Orleans and New York as the vantage points from which the music evolved. "Jazz Crossroads of America," a special four-part WFIU series that begins airing Friday, September 7 at 10 p.m., traces the evolution of 20th-century American jazz through a Midwestern microcosm, using the National Road-US 40, which traverses the state of Indiana from Richmond through Indianapolis to Terre Haute-as a metaphor not just for jazz in Indiana, but for the development of American jazz in general.

The National Road symbolizes the immense amount of culture transported into Indianapolis via the pioneers and immigrants of the 19th and 20th century. It's also the road that leads to Richmond, the site of Gennett Records, where many jazz greats recorded music that would become a part of the jazz canon. Gennett was a focal point of early jazz, as were the Indiana college campuses where students not only danced to jazz, but played it as well, just as students practice rock, hiphop, and electronica in garages and bedrooms today.

The National Road is also a metaphor for the exodus of talented jazz musicians from Indiana in the 1950s and 60s. As in many Midwestern areas, economic pressures as well as cultural changes led to the eventual end of the Golden Age of Indiana jazz. That decline mirrored the music's commercial decline across the country; yet the emergence of academic jazz programs like the one started by David Baker at Indiana University helped keep the music alive, both as a music of tradition and as a music of continuing innovation.

"Jazz Crossroads of America" will air each Friday evening in September at 10 p.m. on WFIU and will also be available for online listening at wfiu.org/jazzcrossroads. Here's a show-by-show look at the series:

A Richmond, Indiana record label that was a sideline business for a piano factory gave birth to some of the founding records of jazz history. Louis Armstrong, Jelly Roll Morton, and Bix Beiderbecke were not yet legends when they came to the Gennett studios in the 1920s, but the music they played there would send them on their way. It's the place where Hoagy Carmichael's "Stardust" was first recorded, as Carmichael and other young musicians who'd flourished on Indiana's popular collegiate-jazz scene drove to Richmond to make their first records.

In segregation-era America many major cities with a significant African-American population had a "main stem," or avenue with a vital concentration of business and entertainment. In Indianapolis, that street was Indiana Avenue. Indiana Avenue and the neighborhood around it produced some of the most influential jazz artists to appear on the post-World War II national jazz scene-trombonist J.J. Johnson, guitarist Wes Montgomery, and trumpeter Freddie Hubbard-as well as a flourishing scene of artists who remained in the city. You can listen online here: Indiana Avenue: Black Boulevard Of Jazz

How two Indiana songwriters and two singing groups influenced the direction of American popular music. Hoagy Carmichael and Cole Porter wrote hundreds of songs that defined both sophistication and Middle American life and formed the basis for much of the modern jazz canon. The Indianapolis group the Ink Spots helped spawn doo-wop and r & b, while the Four Freshmen's unique vocal approach was appropriated by admirer Brian Wilson for the sound of the Beach Boys. We'll also explore Indianapolis' early-20th century ragtime scene and highlight some of the city's successful songwriters such as Noble Sissle ("I'm Just Wild About Harry") and Leroy Carr.

The program includes interviews with Indiana University professor of musics Timothy Noble and Glenn Gass and Smithsonian American music curator John Hasse, as well as archival interviews with the late Ross Barbour (member of the Four Freshmen) and the late Richard Sudhalter (Hoagy Carmichael biographer). You can listen online here: A National Road Of Song: Indiana Singing Groups And Songwriters

Episode 4: "Birth Of The Cool, Birth Of The School: Indiana And The Rise Of Jazz Education"

In the 1960s the jazz world was hit hard by the success of rock â€˜n roll. At the same time, universities began to establish jazz education programs (partly in response to the civil-rights movement), and the study of jazz became institutionalized. Musician David Baker created a jazz-studies program at Indiana University, while saxophonist Jamey Aebersold started a play-along series of guides and recordings that achieved global influence and success in the training of young jazz musicians. As the commercial power of jazz began to wane, Indiana played a vital role in the birth of the jazz-education movement, and continued to produce national musicians of note through Baker and Aebersold's pioneering instructional programs.

The program also looks at the migration of Indianapolis jazz musicians such as bassist Leroy Vinnegar, pianist Carl Perkins, and the quartet the Mastersounds to the West Coast in the 1950s, and Terre Haute bandleader Claude Thornhill's influence on Miles Davis' "Birth of the Cool" band and the cool-jazz movement that followed. David Baker, Jamey Aebersold, trombonist and arranger Brent Wallarab, and jazz historian Ted Gioia join us. You can listen online here: Birth Of The Cool, Birth Of The School

"Jazz Crossroads of America" was written, produced, and hosted by David Brent Johnson, and is supported in part by an award from the National Endowment for the Arts, bringing the arts to all Americans.