At The Jazz Corner Of The World: Live From Birdland 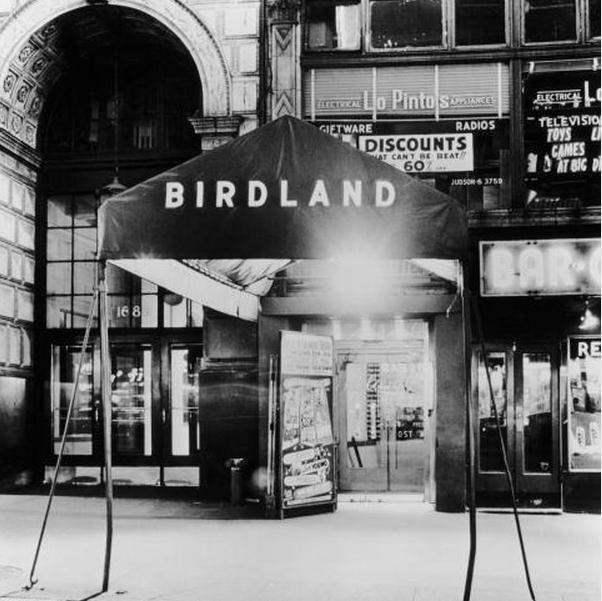 Birdland billed itself as "the jazz corner of the world," and between 1949 and 1965 there were many nights when this little Manhattan nightclub lived up to its hype. You could find Birdland in a basement at the corner of 52nd Street and Broadway in New York City, the intersection of bebop and showbiz, and on any given night Charlie Parker, Art Blakey, Bill Evans, Charles Mingus, or John Coltrane might be playing there. On this edition of Night Lights we‘ll return to Birdland to hear those artists, all of them performing in their prime, in the exciting post-World War II years of American culture.

Birdland was the creation of several New York City jazz and showbiz operators who wanted to provide a new venue for modern jazz in the heart of Manhattan. It took its name from Charlie Parker‘s "Bird" nickname, and Parker performed there on the club‘s opening night on December 15, 1949, along with Lennie Tristano, Lester Young, and Hot Lips Page. In honor of the name the club kept a number of actual birds in cages suspended from the ceiling, though they lasted for only a few weeks, because of the club‘s smoky air and poor ventilation.

An awning stretched out from the club‘s street-level entrance with "Birdland" emblazoned on either side. The walls of Birdland were decorated with murals of famous jazz personalities, painted by the club‘s hatcheck girl. The tables were covered with red-and-white-checkered cloths and had black plastic ashtrays inscribed with the club‘s motto: "Birdland: the Jazz Corner of the World." To the right of the stage was an area known as "the bullpen"or the "bleachers," several rows of chairs where non-drinkers who were there simply for the music could sit. At several points throughout its 15-year run Birdland played host to famous jazz DJ Symphony Sid Torin‘s late-night program, and a number of those broadcasts have survived.

The first "official" live recording to be made at Birdland, using a record label‘s equipment, as opposed to an amateur tape of a radio broadcast, became a landmark album in jazz history. Drummer Art Blakey‘s A Night In Birdland Volumes 1 and 2 showcased the birth of hard bop, and an early configuration of what would become known as the Jazz Messengers, the Blakey group that became a key stop on the path to jazz stardom for musicians such as Lee Morgan, Wayne Shorter, and Freddie Hubbard.

A Night In Birdland Volume 1 kicks off with an announcement from the club‘s legendary MC Pee Wee Marquette, a tux-clad midget, not quite four feet tall, who was notorious for refusing to announce musicians‘ names correctly unless they tipped him. DownBeat Magazine, paraphrasing a not-suitable-for-primetime Lester Young reference to Marquette, described him as "the half-pint-sized master of ceremonies, known for the florid phrasing of his introductions and his not infrequently salty manner."

Throughout the 1950s Birdland was a popular Manhattan spot for celebrities, and if you dropped in you might see Frank Sinatra, Marilyn Monroe, Joe Louis, or Judy Garland in attendance. The club‘s relatively small size, with a seating capacity of up to 400, gave it a big-city intimacy, and the music gave it an air of hip sophistication. Jazz writer Dan Morgenstern lauded the club‘s racial atmosphere, noting that "Most of the staff was black, the menu offered polite soul food, and the clientele was well-integrated."

Music typically started around nine in the evening and continued, with intermissions, until five in the morning. While many of the acts at Birdland were small groups like Blakey‘s, the club featured big bands as well, crowding anywhere from a dozen to 16 musicians up onto the bandstand. Count Basie‘s orchestra often held forth there, as did the up-and-coming Maynard Ferguson Big Band, which recorded its first live album at Birdland in 1959.

"Communing With The Sounds"

Along with all of its jazz glory, there were some violent moments in the history of Birdland. In 1959 one of its founders and co-owners, Irving Levy, was stabbed to death in the club, and that same year trumpeter Miles Davis was beaten by a policeman as he took a break on the sidewalk outside and escorted a white female companion to a taxi. But the club‘s reputation was mostly as a venue for serious jazz listeners…as a 1959 DownBeat article celebrating Birdland‘s 10th anniversary put it, "In Birdland the music is the thing, and the prospective customer had better be prepared to sit tight-lipped, communing with the sounds."

Birdland continued featuring live jazz until 1965, briefly flirting with a rock and roll policy in the spring of 1964 and then returning to jazz in the summer, playing host to the homecoming of bebop pianist Bud Powell, who had been living in France for five years. In 1965 the club once again tried rock and roll and then closed shortly thereafter, with longtime Birdland proprietor Oscar Goodstein telling DownBeat Magazine, "I‘m heartbroken. To me, there is no finer form of entertainment than jazz, but I couldn‘t keep going broke." He blamed the club‘s demise on youth‘s turn to rock and folk music.

Birdland would live on, though, in the jazz standard that George Shearing composed called "Lullaby of Birdland," in the 1970s hit track by Weather Report simply titled "Birdland", in the grooves and aluminum of LPs and CDs of recordings made at the club, in the accounts of those who saw and heard jazz history made there, and in the club of the same name that opened at another Manhattan location in 1985.

Tony Flood has posted a detailed, richly illustrated history of Birdland on his blog.

Listen to some more broadcasts from Birdland in this previous Night Lights program, Burning With Bud: Bud Powell Live 1944-53

The Wrong Place For The Right People: Cafe Society

Live At Cafe Bohemia: Hardbop In The Heart Of Manhattan