The Jade Bass: A Tribute To Scott LaFaro 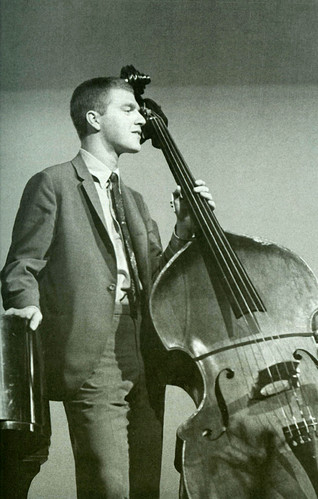 Scott LaFaro lived only 25 years. His influence as a revolutionary jazz bassist has lasted 60 years and counting.

Scott LaFaro was a driven and disciplined innovator who changed the role of the bass in jazz, and who stepped into jazz legend with a single day of recordings made with pianist Bill Evans, just ten days before his death at the age of 25. What's also amazing, though, is how much playing and recording LaFaro packed into his brief career. Bassist and Indiana University Jacobs School of Music faculty member Jeremy Allen joins Night Lights this week as we take a look at the life and music of Scott LaFaro, who would have turned 75 on April 3, 2011.

"I Will Realize That Ambition"

LaFaro was born April 3, 1936 in Irvington, New Jersey and grew up in Geneva, New York. His father was a musician, and LaFaro played clarinet and sax in high school; he didn't take up the bass till he was 18 years old. Often described as intense and driven, aloof but fun-loving, LaFaro hurdled through life fueled by his passion for music. In his girlfriend's high school senior yearbook he wrote:

For the rest of our lives we'll live, eat, and sleep modern jazz. There is something about music that I could never explain to you. I just go crazy when I hear it and I get the wildest feelings when I, myself, play it. I know that I can become a top-flight performer and I will realize that ambition.

LaFaro practiced fanatically, and his playing evolved with astonishing rapidity throughout the late 1950s as he worked with a diverse array of artists, including Buddy Morrow, Victor Feldman, Cal Tjader, Hampton Hawes, Chet Baker, Sonny Rollins, and Stan Kenton. While his legacy today rests primarily on his melodic style and his virtuoso ability, his early recordings reveal that he was excellent at more standard aspects of playing the bass in a jazz ensemble as well:

Jeremy Allen on the evolution of Scott LaFaro's style:

In 1959 LaFaro began working with pianist Bill Evans and drummer Paul Motian, and at the end of the year they went into the studio to record the album Portrait in Jazz. The empathetic quality that emerged in the trio's sound has often been called "conversational," for the way in which the three musicians responded to one another. Evans' rapport with LaFaro was especially strong, as jazz writer John Szwed notes:

Playing free of the timekeeping role, LaFaro tossed out arpeggios and guitarlike flourishes, swirled around the piano's lines, sometimes stated the melody before Evans could play it, sometimes chased after him with echoes of what had just been played on the piano.... This was a new kind of trio playing, where the beat was often felt rather than heard, so when LaFaro does apply himself to the beat... it comes as something of a shock and sends the group hurtling forward.

Although LaFaro is best known today for his dynamic association with Evans, around 1960 he was also playing and recording with another highly influential jazz artist of the times-avant-garde saxophonist Ornette Coleman. LaFaro appears on Coleman's epic Free Jazz album, and on the quartet date The Art of the Improvisers as well. Decades later Coleman praised LaFaro's playing in a free-jazz context:

He could create ideas that no other person could at that time. Scotty could change the sound of a note by just playing another note and he's the only one I ever heard that could do that with the bass. His notes actually changed the notes to notes that are not in the keys that the bass is in... Scotty was just a natural, played so naturally, had a love of creation. I'm not only talking about music, but being human. I would say he was closer to a mystic. Very spiritual.

In June of 1961 the Bill Evans Trio played a two-week gig at the Village Vanguard in New York City. On Sunday, June 25, the last day of their stand, they were recorded by Riverside Records. Early on a power outage nearly brought the attempt to tape the trio to a halt, but fortunately only one take was disrupted. The subsequent LPs Sunday at the Village Vanguard and Waltz for Debby would become some of the most influential records in jazz history, setting the template for the modern jazz piano trio, in which the bass and drums are equal, rather than supportive, voices. They also offer us the fullest document of LaFaro, playing at a new level of creativity and strength, as well as a chance to hear two of his compositions-"Gloria's Step" and "Jade Visions," both of which are featured in this Night Lights program.

"It's Going to Set the Instrument Back 10 Years"

A week after the Vanguard gig ended, LaFaro played with Stan Getz at the Newport Jazz Festival. Early in the morning of Thursday, July 6, driving back from a friend's house in western New York state, he apparently fell asleep at the wheel and hit a tree, killing him and his passenger instantly. The jazz world went into shock. Bassist Ray Brown, who'd heard LaFaro at the Newport gig, told Downbeat Magazine, "It's going to set the instrument back 10 years. It will be that long before anyone catches up with what he was doing." Bill Evans was devastated and hardly played piano at all for the next six months.

LaFaro's departure was sudden, violent, and unexpected, but his influence had already begun, and its spell would hold sway over jazz bassists for decades to come. Jeremy Allen on the LaFaro effect:

Contemporary bassist Christian McBride says Jimmy Blanton, Duke Ellington's bassist in the early 1940s who pioneered the bass as a soloing instrument, is the Old Testament of bass playing, and LaFaro, who brought it to the forefront as a rhythmically freer, more conversational instrument- is the New Testament.

More from my interview with Jeremy Allen about Scott LaFaro:

Watch LaFaro playing with the Richie Kamuca Quintet in 1958:

Night Lights fun fact: in the 1961 Warren Beatty-Natalie Wood Hollywood classic Splendor in the Grass, LaFaro is the bass player wearing the straw hat in this scene (visible during 0:34-0:38).