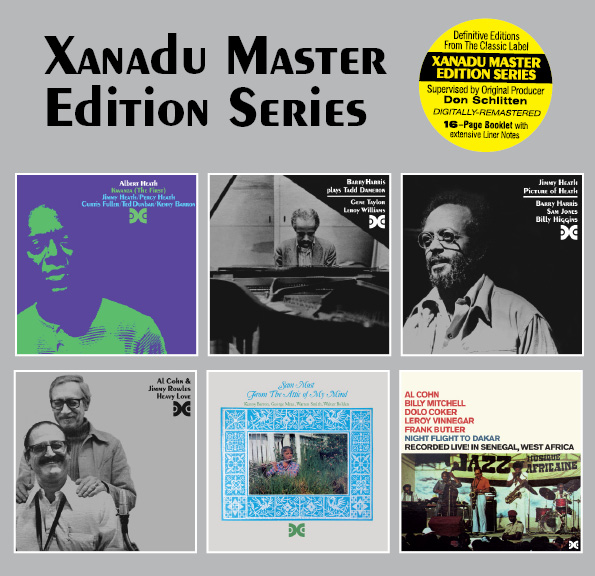 It was only a matter of time before the 1970s began to be mined more extensively for classic-jazz reissues and never-before-released recordings. In the past few years a new historical view of the decade has emerged, seeing it as a much richer and more diverse period than the previous "age of fusion" depiction made it out to be. Of the 16 titles listed below, ten fall partly or completely into that particular era or its immediate very-early-80s echo. As always, this is a highly-subjective and not-completely-inclusive list; feel free to add your own picks in the comments field at the end of the post.

John Carter/Bobby Bradford, No U Turn (Dark Tree). The world can always use more recordings of avant-garde tandem John Carter and Bobby Bradford, in this commentator's humble opinion. Subtle outside explorations in concert circa 1975.

Joe Castro, Lush Life: A Musical Journey (Sunnyside). Still working my way through this recently-released treasure trove of recordings made by West Coast stalwarts in the 1950s and 60s at pianist Castro's digs, with a cast that includes Stan Getz, Teddy Wilson, Zoot Sims, Leroy Vinnegar, Teddy Edwards and others.

Miles Davis, Bootleg Series V. 4: At Newport 1955-1975 (Columbia/Legacy). Some jazz fans groused that this latest Sony "bootleg" Miles release contained a great deal of previously-released material, but it's great to have it all in one set, offering a panoramic view of Davis' musical evolution during the years in question. The 1966 and 1967 concert recordings of the "Second Great Quintet" alone make it a worthy pickup for any fan of the trumpeter.

Red Garland, Swingin' On The Korner (Elemental Music). Was he ever. The only time pianist Garland, bassist Leroy Vinnegar, and drummer Philly Joe Jones were recorded together (1977 at the Keystone Korner in San Francisco).

Erroll Garner, Complete Concert By The Sea (Legacy). One of the biggest-selling jazz albums of all time just got bigger!! A nice expansion of a classic performance and perhaps the starting point for an overdue Garner revival.

Billie Holiday, Banned From New York City: Live 1948-1957 (Uptown). A great centennial treat for Lady Day fans, especially the presentation of her entire 1948 performance at the Shrine Auditorium in Los Angeles. As always, Uptown does a socko job with the booklet.

Abbey Lincoln, Sophisticated Abbey (HighNote). A rare portrait of the singer from the in-between years of her career on record.

JR Monterose, Live In Albany (Uptown). Valuable document of The Best Tenor You Never Heard back on the scene in 1979. But what's with that Johnny Ramone haircut?

Wes Montgomery, In The Beginning (Resonance). Insert loud rave here from the Hoosier partisan who runs this program. Simply an amazing two-disc anthology of live and studio-recorded Wes, almost entirely from the mid-to-late 1950s and usually in the company of brothers Buddy and Monk, not to mention unsung Indianapolis saxophonist Pookie Johnson. Accompanied by a comprehensive booklet full of reflections and essays that help round out this remarkable portrait of pre-fame Montgomery. And there's more in the pipeline, starting next week with One Night In Indy (already available on vinyl).

Frank Sinatra, A Voice On Air (Legacy). Centennial madness this past year for the Chairman of the Board (and boy, I gotta say that the first few hundred pages of James Kaplan's new biography covering the 1954-1971 period tell a story that sounds as if it was scripted by James Ellroy and a team of Mad Men writers); this fine four-CD compendium of radio broadcasts drawn primarily from the 1940s and early 50s is a pleasant reminder of why so much fuss was made about the Voice.

Weather Report, The Legendary Live Tapes: 1978-1981 (Legacy). Can we also agree that "fusion" is no longer a dirty word? With bassist Jaco Pastorius (also the subject of a new documentary) in full flight.

Various artists, The Complete Bee Hive Sessions (Mosaic Records). (You can check out some of the music from this set on the Night Lights program Boppin' On Bee Hive)

Various artists, The Xanadu Master Edition Series (Elemental Music). All hail Zev Feldman, who in recent years has emerged as the Indiana Jones of great jazz reissues and discoveries. In 2015 he and Elemental Music partner Jordi Soley began to re-release what they rightfully refer to as the "lost gems" of the 1970s label Xanadu, featuring artists such as Barry Harris, Jimmy Heath, Al Cohn, Kenny Barron, and Teddy Edwards. (Night Lights highlighted some of the initial reissues in the program Return To Xanadu)