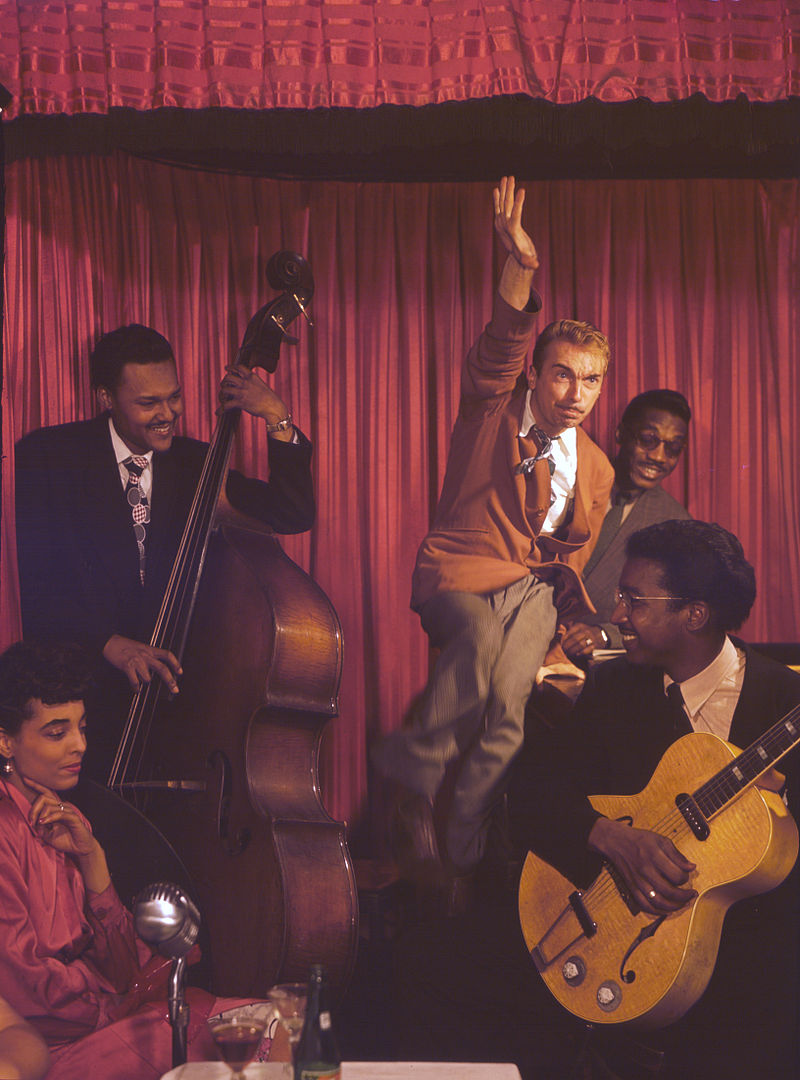 Who was â€˜Moose the Mooche'? Why is a tune on Miles Davis' most famous album called "Freddie Freeloader"? What could we learn from Professor Bop? Who put the Benzedrine in Mrs. Murphy's Ovaltine? On this edition of Night Lights we'll check out the stories behind some jazz characters both imaginary and real-hangers-on, groupies, friends of all manner, and sometimes the performers themselves in the guise of an on-stage persona-in the music of Charlie Parker, Slim Gaillard, Horace Silver, Babs Gonzales, and other artists.

We'll start with singer and bandleader Cab Calloway, whose outsized showman personality sustained him as a performer for five decades, but who initially rose to fame on the portrayal of the doomed heroine we know as "Minnie the Moocher," written by Calloway with his manager Irving Mills in an effort to create a song for the public to identify with the singer and his band. They succeeded, to put it mildly; the song's hi-de-hi-de-ho call-and-response refrain, supposedly a spontaneous invention when Calloway forgot the lyrics one night during a broadcast, would become a lifelong signature for the bandleader. Many listeners, however, did not realize that "Minnie the Moocher" and its numerous sequels were studded with allusions to the drug culture of 1930s Harlem. "We created her as a rough, tough character," Calloway wrote in his autobiography, "but with a heart as big as a whale":

Calloway's popularity would prove to be quite durable, but in the late 1930s and early 1940s another hepcat star emerged on the scene-guitarist and singer Slim Gaillard, who teamed up with bassist Slam Stewart to form the Slim and Slam Duo, scoring hits such as "Flat Foot Floogie With a Floy Floy," so popular in 1939 that a copy of it was included in a time capsule buried at the New York City World's Fair. Gaillard's origins have several different accounts, though it seems fairly certain that he spent some of his youth in Detroit and in Crete. He invented a jivey hipster language he called "Vout," and dubbed himself "McVouty," singing in a cool, lighthearted, nonsensical lingo often spiced with culinary references and tags invoking the Gaillard word "oroonie" that went over humorously with 1940s audiences:

Another performer with a colorful 1940s stage persona simply referred to himself in one song as "Harry The Handsome Hipster." Born Harry Raab in 1915, Harry Gibson started out as a stride and boogie-woogie pianist and became well-known on New York City's 52nd Street scene in the early 1940s, revving up his style with a musical approach that some have suggested anticipated the rise of rock â€˜n roll; at the same time, he was involved with the esteemed Julliard School. In his autobiography he claimed to have coined the term "hipster." Gibson's popularity took a nosedive with the music industry after his 1947 recording "Who Put The Benzedrine In Mrs. Murphy's Ovaltine," with its overt allusion to the stimulant that was used by some in the 1940s hipster subculture. Gibson would stick around for another few decades, though, reinvigorated by the emergence of rock â€˜n roll, and the song itself would show up again on a 1975 Dr. Demento compilation.

Babs Gonzales was another real-life character who popped up in the colorful world of 1940s hip and bebop. A sometime road manager, promoter, and singer, he was born Lee Brown in Newark in 1919, but he and his brothers all went by the nickname "Babs," and he later adopted Gonzales as his last name in an attempt to avoid anti-black racism by passing as Mexican. Gonzales worked as Errol Flynn's chauffeur for awhile in 1940s Hollywood, and broke into the band business with Charlie Barnet and Lionel Hampton before putting together his own small group, "Three Bips and a Bop." In the late 1940s the group made numerous recordings for Blue Note Records, working with some of the top young jazz musicians of the day, and Gonzales' song "Oop-Pop-a-da" would become famous through Dizzy Gillespie's version of it. His 1967 autobiography I Paid My Dues: Good Times, No Bread-A Story of Jazz, is a classic underground memoir of the mid-20th century jazz scene. Here we hear Gonzales putting on a hip teaching cap with "Professor Bop," featuring the debut of tenor saxophonist Sonny Rollins (still a teenager in 1949!) on record:

Speaking of bop, the artist who did so much to spark the movement once named a composition after a man we might call a business acquaintance. When saxophonist Charlie Parker landed on the West Coast at the end of 1945, he was already a heroin addict, and the heroin he was able to find in Los Angeles proved to be weak and unsatisfactory, until he connected with Emry Byrd, aka "Moose the Mooche." Byrd, wheelchair-bound as a result of polio, ran a newsstand on Central Avenue, the main stem of Los Angeles' black entertainment and commercial district, but he sold more than newspapers there. Parker was so grateful for Byrd's superior product that he titled one of the very first recordings that he made for the small California record label Dial in Byrd's honor. Not only that, but he eventually signed over half of his Dial royalties to Byrd, who later informed the label owners of the agreement via a letter sent from his new residence, San Quentin Prison. Parker biographer Carl Woideck calls the tune "Moose the Mooche" "one of Parker's high points of melodic composition," citing the saxophonist's use of "a single rhythmic motive to unify" the piece and the variety of shapes employed to present its melodic contours. "Moose the Mooche" went on to become a bebop standard and has been performed in recent years by artists such as Joshua Redman and the jam band Phish; here's the Charlie Parker original:

In this next set we hear two compositions written by the great hardbop pianist and bandleader Horace Silver, with lyrics added by Silver himself in the first instance, and jazz critic Ira Gitler in the second. "Senor Blues," recorded in several different versions for Blue Note Records, helped establish the Horace Silver Quintet in the late 1950s just as "Minnie the Moocher" sealed the deal for Cab Calloway as a rising-star bandleader in the 1930s. A minor-key composition full of sly and snaky rhythm twists and turns, "Senor Blues," like the other song we'll hear, "Filthy McNasty," depicts a Don Juan figure, though Senor Blues is a more subtle character, while McNasty, supposedly inspired by the villain in the W.C. Fields movie The Bank Dick, is a little louder and more down-and-out in his charms. "Senor Blues" was also recorded by Ray Charles, Anita O'Day, and blues singer Taj Mahal; here's a Horace Silver take with Bill Henderson providing the vocals:

A musical portrait now of a sort of female counterpart to these Don Juan characters, a real-life person who was known by many members of Woody Herman's 1940s big band. Herman band arranger Ralph Burns, who wrote the piece we're about to hear, said it was inspired by a woman with a British accent who showed up at a Chicago concert, "out of her skull, dancing away, just having fun." Afterwards she introduced herself as "Lady MacGowan" and invited the band up to her hotel room for a party-the first of several evenings of what Burns said were like "orgy parties!" Lady McGowan may or may not have been an English aristocrat who spent some time in mental institutions, but her frolics with the Herman band were vividly recalled by the musicians decades later. Ralph Burns' composition is a masterpiece, occupying what jazz writer Loren Schoenberg calls

the realm of instrumental fantasyâ€¦the unusual tonality Burns achieves throughout never sounds like cheap makeup or false exoticismâ€¦ he conjoins structural joints with unusual sounds and figures the same way that a magician uses misdirection to help create an illusion.

Freeloading His Way Into A Jazz Masterpiece

We'll explore more characters and scenesters in a future edition of Night Lights, including a whole set of tributes to the so-called "jazz baroness," Pannonica de Koenigswarter, aka "Nica." This program closes with something from Miles Davis' 1959 masterpiece Kind Of Blue, the only track on the album to feature Wynton Kelly on piano instead of Bill Evans. "Freddie Freeloader," according to Kind Of Blue chronicler Ashley Kahn, was "Fred Tolbert, a colorful street character who worked as a bartender at a Philadelphia bar called the Nightlife and survived on handoutsâ€¦ his business card simply read, â€˜Freddie the Freeloader.'" Tolbert befriended Davis in the late 1950s and was later described by Davis' ex-wife Frances as "kookyâ€¦harmless kooky," while Herbie Hancock thought Davis liked Tolbert for his street smarts; perhaps that's why the trumpeter named a piece with a funky, bluesy glide to it in Tolbert's honor, and why he preferred to have Wynton Kelly in the piano chair. In his liner notes for the album, Bill Evans offers a gracious nod to the sole track on which he didn't appear, describing it as "a 12-measure blues form given new personality by effective melodic and rhythmic simplicity." Ashley Kahn notes that "Freddie Freeloader" is the "least melancholy" track on an album marked by a late-night modal moodiness: