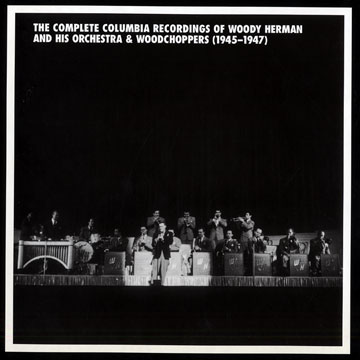 Woody Herman--bandleader, clarinetist, singer, saxophonist--was born in Milwaukee, Wisconsin on May 16, 1913. Herman was something of a show-biz prodigy as a child, singing and dancing in vaudeville, billed as "The Boy Wonder," but it was the musical instruments he took up at an early age, and his love of jazz artists such as Louis Armstrong and Duke Ellington, that paved the way for his eventual career.

Herman made his way into the professional entertainment orchestra scene of the 1930s, where his enthusiasm, friendliness, and musical versatility served him well, and ended up with songwriter Isham Jones‘ band. When Jones decided in 1936 to retire and live off his considerable royalties, Herman took over, and the orchestra eventually became known as "the Band That Plays The Blues."

While radio broadcasts helped build recognition for the band, it was the 1939 song "Woodchopper‘s Ball" that really put them on the map. Herman would later say that the recording sold more than 5 million copies in all, and was the biggest hit of his career--people never stopped asking for it, even decades later in the 1970s and 80s.

Herman‘s Band That Plays The Blues had already dabbled in the emerging progressive jazz of the 1940s by recording the young Dizzy Gillespie‘s composition "Down Under." Throughout his entire career Woody Herman would have a reputation for his musical open-mindedness and willingness to incorporate new sounds and elements into his bands, and this was perhaps nowhere more evident than in the 1940s, as he went about transforming the Band That Plays The Blues into what would come to be known as The First Herd, bringing in talented and innovative young musicians such as pianist and arranger Ralph Burns, bassist Chubby Jackson, saxophonist Flip Phillips, and trumpeter and arranger Neal Hefti.

The new band had a joyous, explosive energy, a seemingly fearless musical exurberance. One musician, looking back 50 years later, called the First Herd "Killers of the mid-40s, the most thrilling bunch of musicians ever assembled." In addition to hits, vocal tracks, and small-group sides, Herman‘s mid-1940s First Herd big band ventured into the realm of what might be considered pre-Third Stream, the convergence of jazz and classical music that would gain attention in the 1950s--by recording two extended compositions-one by Ralph Burns, and the other by classical composer Igor Stravinsky.

How Stravinsky came to write a piece for Herman‘s orchestra has long been the subject of much jazz mythology. Somehow the composer, living in California in the mid-1940s, heard several of the First Herd‘s recordings, and was particularly impressed by Ralph Burns‘ "Bijou," which, as critics have pointed out, sounds somewhat Stravinskian. Herman also supposedly paid Stravinsky, who was low on funds at the time, a generous commission.

A Band Of Troubled Brothers

The First Herd performed the Ebony Concerto at a Carnegie Hall concert in the spring of 1946, but by the end of the year, the band was no more. Numerous challenges, such as transportation and salary costs and changing lifestyles of returning soldiers forced many big bands out of business by 1947, and Herman took nine months off to look after his ailing wife.

By the end of 1947 Herman was back, with what would be dubbed "The Second Herd"-once again an orchestra of talented, daring young musicians, but this time with a bebop kick, as well as another, more troubling kind of kick: heroin addiction. Saxophonists such as Zoot Sims, Stan Getz, and Serge Chaloff gave Herman a dynamic sound even as they created problems on and off the bandstand. As a musician recording strike loomed, Herman rushed the band into the studio to make a number of sides for Columbia. We‘ll hear band member Jimmy Giuffre‘s tune that became an anthem for Herman‘s saxophone section, "Four Brothers," as well as a live broadcast of Ralph Burns‘ "Summer Sequence," which became a star feature for Stan Getz.

At the end of 1948, with the second recording ban at an end, Herman was finally able to get the Second Herd back into the studio, this time for the Capitol label. The Second Herd would roll along for a few more months, but Herman would ultimately disband it as well, calling it a "financial albatross." Years later he wrote in his autobiography that

The band was spectacular, but the public wasn‘t ready for it. Unlike the previous Herd, it wasn‘t playing the pop music of the day.

But the demise of the Second Herd was hardly the demise of Woody Herman. He‘d go on to lead more reconfigured orchestras, some of them outstanding in their own right, for the next 35 years, and we‘ll feature some of them in a future Night Lights show. Before disbanding, the Second Herd laid down 19 studio tracks that represent the second bookend of its recorded legacy. We conclude with two of them-the flagwaver "More Moon," and a showcase for singer Mary Ann McCall, "Detour Ahead."