Heard It On The TV: Jazz Takes On Television Themes 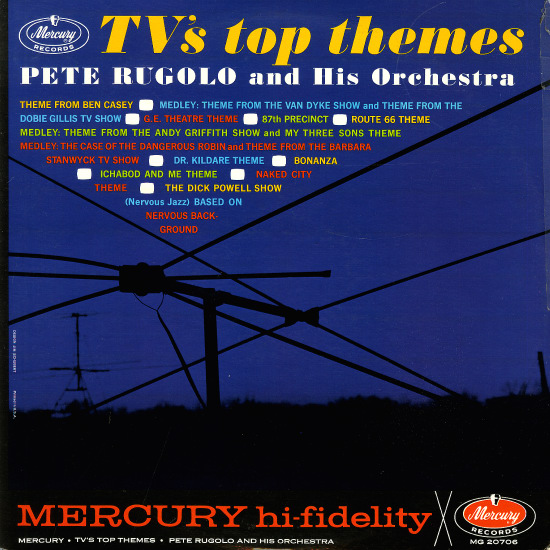 As television rocketed into the entertainment culture of mid-20th-century America, musicians and composers, many of them with jazz backgrounds, were called upon to write themes and cues for the wide variety of programs that populated the airwaves. Often jazz artists ended up recording these themes as well. On this edition of Night Lights we‘ll hear music from Shelly Manne, Quincy Jones, Vince Guaraldi, Bill Evans, Sun Ra and others.

Television burst into the post-World War II entertainment culture with a bang, soon overtaking radio and the movies in popularity. By 1970 96 percent of American households had at least one TV set, and there were nearly 600 commercial stations spread across the country. In addition to sports and news, the three major TV networks broadcast a great deal of dramas and comedies--and these shows required music. A mix of Hollywood composers with classical backgrounds and jazz musicians who had settled on the West Coast were called upon to write and record themes and cues for weekly programs. These themes were expected in just one minute to evoke the general mood of the show, forming an association and conditioning expectations for viewers, eventually taking on a beloved, Pavlovian familiarity.

The theme for Jack Webb‘s 1950s crime show Dragnet was the first TV theme to become a hit, with bandleader Ray Anthony‘s 45 recording of it selling half a million copies. Crime shows in general would often feature jazz-influenced themes and music, and a future Night Lights show will focus on them alone. We‘ll hear one piece right now that, like the Dragnet theme, gained widespread recognition in popular culture. In 1958 the young composer Henry Mancini was coming off doing the score for Orson Welles‘ Touch Of Evil, but he was also jobless, as Universal Studios was cutting its staff. He went to the studio lot one day to get his hair cut and ran into director Blake Edwards, who needed some music for a new TV show. Peter Gunn starred Craig Stevens as a suave, debonair and somewhat laconic private detective who dated a jazz singer, hung out at a jazz bar called Mother‘s, and busted the bad guys in his spare time. Mancini ended up contributing a good deal of music to the show, most notably the theme, which was recorded by more than a hundred artists in the first few years after its initial appearance. He wrote in his autobiography that

it actually derives more from rock ‘n roll than from jazz. I used guitar and piano in unison, playing what is known in music as an ostinato… it was sustained throughout the piece, giving it a sinister effect, with some frightened saxophone sounds and some shouting brass.

Drummer Shelly Manne‘s group, representative of the West Coast jazz musicians who often appeared on the show playing at the club, recorded some of Mancini‘s music in January of 1959. Here‘s their version of the theme from Peter Gunn:

The TV scoring industry employed many musicians, composers and arrangers from a jazz and big-band background; Nelson Riddle, who collaborated with Frank Sinatra on several of the singer‘s 1950s LP masterpieces, was one example, writing for shows such as The Untouchables, Naked City, and Route 66, a show that seemingly modeled its premise of two young men traveling across America from Jack Kerouac‘s popular novel On The Road. Riddle‘s recording of his theme became a top 40 hit. "I think it gets the intriguing mysticism which often generates at the beginning of a trip," Riddle later said. "There‘s the persistence of sound, of motion, the romance of seeing them drive down this highway."

Around the time that Route 66 ended its run, another TV franchise that would ultimately become quite popular was just beginning. Producer Lee Mendelsohn was working with Peanuts creator Charles Schulz to bring Schulz‘s comic-strip children characters to animated life, and he was in search of music that had a different kind of energy than the standard sound for kids‘ programming. Turned down by jazz star Dave Brubeck, who was too busy to score the Peanuts project, Mendelsohn was driving across the Golden Gate Bridge one day when he heard jazz pianist Vince Guaraldi‘s hit "Cast Your Fate To The Wind" on a local radio station, and knew that that was the sound he was looking for--poignant and lively, its rhythms punctuated with a jazzy enchantment. Guaraldi would go on to write music for 15 animated Peanuts specials in all, and for many his Peanuts music would serve as an introduction to jazz. Here‘s his "Linus and Lucy" theme:

We‘ll hear another TV Lucy theme now, written by Eliot Daniel, an arranger for Rudy Vallee in the 1930s and a two-time Oscar songwriting nominee, who wrote it in one afternoon for a TV producer friend‘s sitcom pilot. "I wrote the first phrase of the song so that it matched ‘I love Lucy and she loves me," Daniel later said. The show I Love Lucy would go on to become one of the biggest hits of television‘s so-called 1950s golden age, and its opening theme, done up in a brassy Latinized arrangement, suitably set the stage for the comedic hijinks that followed. Decades later pianist Barry Harris served up an interpretation that might put some listeners in mind of bebop master Bud Powell:

Music from a TV comedy of the animated variety now. In 1957 Hugh Curtin, who had worked primarily on scores for industrial films and commercials, scored an animated Schlitz beer commercial. The commercial‘s directors, William Hanna and Joseph Barbera, liked his work so much that they engaged Curtin later that year for their Saturday-morning cartoon show Ruff And Ready. It was the first of many Hanna-Barbera jobs for Curtin, who scored The Jetsons, Jonny Quest, and most famously, a show about two prehistoric blue-collar suburban families in the city of Bedrock. Curtin, who loved big-band music, put a lot of jazz into his writing, and his theme for The Flintstones has become a lighthearted jam favorite of jazz musicians. Here‘s trumpeter Clark Terry‘s version of "Meet The Flintstones":

This next set features two more examples of jazz-world figures turning their talents to popular TV themes; Neal Hefti had been a key composer and arranger for the big bands of Woody Herman and Count Basie, while Lalo Schifrin had worked throughout the late 1950s and early 60s with Dizzy Gillespie‘s big band and small group. Both penned iconic themes for 1960s TV shows, with Hefti coming up with a theme for Batman that one writer Jon Burlingame praises as "part serious, part silly, just like the series," while Schifrin wrote a piece in 5/4 time for a getaway sequence of a Mission: Impossible episode that producer Bruce Geller liked so much that he made it the program‘s theme. It‘s still used in the popular Tom Cruise movie franchise of the same name today. We‘ll hear both themes, starting off with a little-known recording of the Batman theme by cosmic jazzonaut Sun Ra:

Occasionally TV themes have become a staple of a jazz artist‘s repertoire. Such was the case with pianist Bill Evans, who in his later years frequently played Johnny Mandel‘s theme from MASH. Mandel had originally written the music for Robert Altman‘s 1970 film; when it was turned into a TV series, he rearranged the song, also known as "Suicide Is Painless." As writer Jon Burlingame observes, the mellow, somewhat melancholic mood of the music contrasts with the frantic activity of the MASH unit receiving wounded soldiers that‘s depicted in the show‘s opening credits. Here‘s Bill Evans‘ studio recording of the theme from MASH:

Another popular 1970s sitcom featured music written by a now-world-famous composer and arranger whose jazz roots never completely left his music. When producer Bud Yorkin approached Quincy Jones in 1972 with a request to write a theme for a new show starring African-American comedian Redd Foxx, Jones, who knew Foxx‘s in-person work well, was both disbelieving that Foxx was going to get a national program, and also quite confident that he could come up with an instrumental that captured the comedian‘s persona. The funky, harmonica-organ-and-electronic-sax driven theme for the show Sanford and Son evoked the vibe of TV‘s changed landscape in the 1970s, with more down-to-earth shows that took a frank, funny and edgy approach to cultural issues of the time:

Taxi was yet another popular sitcom that made its debut in the 1970s and featured a jazz theme. Pianist Bob James, who would become an early influence on the smooth-jazz movement and whose music has often been sampled by hiphop artists, wrote a piece of music that was initially named after a guest character on an early episode of the show. The show‘s producers liked it so much, however, that they immediately made it the program‘s new theme. Erik Adams has written that "On a show that boasts one of the greatest sitcom ensembles in the history of TV, ‘Angela‘ is like the unseen cast member, the bleary-eyed sound of tires splashing through puddles and street lights streaking by cab windows." Here‘s Bob James‘ recording of "Angela (Theme From Taxi)":

I‘ll close out this TV-themes edition of Night Lights with the signature music from an initially short-lived late-1960s science-fiction program that turned into a popular-culture franchise, rebooted several times. Alexander Courage, a veteran of music scoring for CBS radio and MGM, was called upon by Gene Roddenberry, the show‘s creator, to write music that eschewed the beeping clichés of space drama and evoked instead an epic sense of adventure. Courage was no fan of science-fiction shows or movies, but he didn‘t spurn the job, and he took as inspiration his memory of a broadcast he‘d once heard of an otherworldly arrangement of the standard "Beyond The Blue Horizon." "I figured if I could get something thatsounded like it was going off into space, and have a lot of motion underneath it, then that might work," he later said. He also came up with an eight-note brass fanfare that decades later still immediately evokes the world of Star Trek for listeners and viewers. Here‘s saxophonist Phil Woods‘ recording of that famous theme: