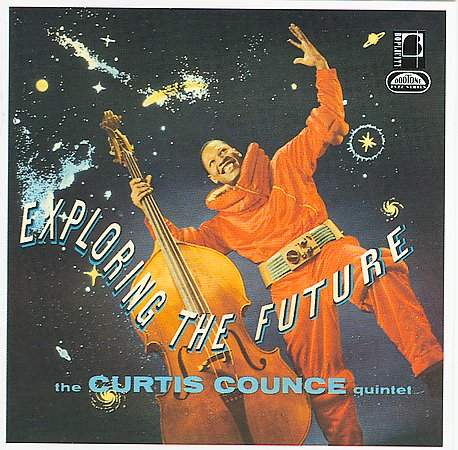 Playing your bass in outer space? Getting some Martians to groove to a West Coast beat? Landing your orchestra on a distant planet? This week on Night Lights it's "Space Age Jazz"-the story of how some 1950s and 60s jazz adventurers were influenced by the Cold War race for space.

On October 4, 1957, the Soviet Union launched Sputnik, the first artificial satellite ever to orbit the earth. It was a significant achievement for humanity and a huge victory for the Soviets over America in the race for space, a contest fueled by the Cold War, spurred in part by the drive to develop intercontinental ballistic missiles that could deliver nuclear warheads.

U.S. ambassador Clare Booth Luce called Sputnik's radio beeps "an outer-space raspberry to a decade of American pretensions that the American way of life was a gilt-edged guarantee of our material superiority." Others warned that the Soviet Union was on the verge of gaining a fearsome military edge through its space exploits, and the New York Times described the nation as being in "a mild state of panic." Over the next several years the U.S. would heavily increase its spending on education and science as it sought to keep pace with the Soviets.

The Soviet-American Cold War contest wasn't the only cause of space's new place in popular consciousness. In the years following World War II, alleged sightings of UFOs had become a phenomenon, and science-fiction novels and movies had become popular as well.

With space as such a topic of fascination and fear, a number of jazz artists began producing works that invoked the space race and space age in their titles, from progressive composers such as George Russell with his album Jazz in the Space Age to hardbop and West Coast musicians such as Shorty Rogers and Curtis Counce. On the cover of his album Martians Come Back Rogers posed in a cube-shaped space helmet while holding his trumpet and wearing his normal jazz musician garb.

Ellington: the Race for a New Sound of Harmony

The late-1950s space race also fascinated one of jazz's greatest composers and bandleaders-Duke Ellington, who put out an album called The Cosmic Scene, credited to "Duke Ellington and His Spacemen." Ellington wrote an article, unpublished in his lifetime, titled "The Race for Space," that linked cosmic and artistic exploration:

In jazz, as in the sciences, I am in a medium for creators. I consider Sputnik a work of art in the same sense that I view a great painting, read a great poem or listen to a great work of music.

Ellington's article also anticipated the tension that later pieces like Gil Scott-Heron's "Whitey On the Moon" would express-the dissonance between America's rush to conquer the heavens and its more ambivalent progress on civil rights:

So this is my view on the race for space," he concluded. "We'll never get it until we Americans, collectively and individually, get us a new sound. A new sound of harmony, brotherly love, common respect and consideration for the dignity and freedom of men.

Swinging For the Moon

Ellington was a strong influence on Gil Melle, an up-and-coming 1950s modernist jazz composer who wrote a series of pieces in the early 1950s called The Interplanetary Suite. A visual artist whose work was used on album covers for Miles Davis, Thelonious Monk, and Sonny Rollins, Melle made a series of progressive-jazz records for Blue Note in the 1950s and went on to be an electronic-music pioneer in the 1960s, spurred in part by his interest in science and technology. His composition "Four Moons" may be an allusion to the four Galilean moons of Jupiter.

The earth's moon, long a topic for popular song, assumed a significant position in the space age after the Soviets landed a probe on it in 1959 and took photographs of its dark side. Two years later United States president John Kennedy proclaimed that America would seek to put a MAN on the moon by the end of the decade. We'll hear a brief excerpt from that speech, and a swinging Camelot-era Mel Torme tribute to Earth's satellite with lyrics that push the outer limits of showbiz goofiness ("Just tell her your feller has gone interstellar," for starters).

Traveling the Spaceways With Sun Ra

Any space-age show has to invoke the music of Sonny Blount, aka Sun Ra, the charismatic bandleader who drew heavily on space symbolism and imagery for his aesthetic. Sun Ra formed his own label called El Saturn Records, dressed himself and his band in homemade space costumes, invoked space in songs like "We Travel the Spaceways," called his band a "space arkestra," and claimed that he had been sent from outer space to save humanity.

"Space was a metaphor that Sonny could express in words or music," his biographer John Szwed wrote, noting that Sun Ra wrapped science fiction, black nationalism, Egyptology, and space travel all into something Szwed calls "Afrofuturism"-a creative way for African-Americans to reposition their place in the human race.

The Birth of Space Exotica

As an aspiring bandleader in the late 1940s, Sun Ra had been influenced by a 78-folio album called Music Out of the Moon. Featuring songs by Broadway and film composer Harry Revel and the eerie space-sounding theremin instrument, Music Out of the Moon also drew on the arranging talents of a young singer who'd given up a potential career as a concert pianist-Les Baxter, who would go on to become a master of all things exotica. "Goin' Up: Space Age Jazz" features both a track from the original Music Out of The Moon album and Baxter's own 1958 Space Escapade.

Arranger Frank Comstock had an impressive jazz pedigree as well, having worked with Benny Carter and Les Brown's big bands in the 1940s, and jazz vocal group the Hi-Lo's in the late 1950s. He also did a great deal of radio and television work to support himself, composing, among other things, the theme to the TV show McHale's Navy. In 1962 he recorded one of the great opuses of space exotica, Project Comstock.

This space-age jazz edition of Night Lights concludes with more music from Duke Ellington and from stratospheric saxophonist Earl Bostic, a pioneering R & B/jazz virtuoso. In the early 1950s a young John Coltrane toured with Bostic, who, as Leonard L. Brown has noted, "taught Coltrane how to gain greater saxophone command, including extended melodic and harmonic possibilities into the altissimo range." In 1960 Coltrane told Downbeat Magazine, "Bostic showed me a lot of things on my horn. He has fabulous technical facilities on his instrument and knows many a trick." (On a related note, Coltrane himself would go on to invoke outer space in some of his mid-1960s compositional titles.)

We'll also hear a snippet of the countdown sequence for astronaut John Glenn's 1961 rocket ride into space that made him the first American to orbit the earth.

A future Night Lights sequel will take a look at space-age jazz from the early 1960s through the mid-1970s.

...and read more about the Cold War space race.