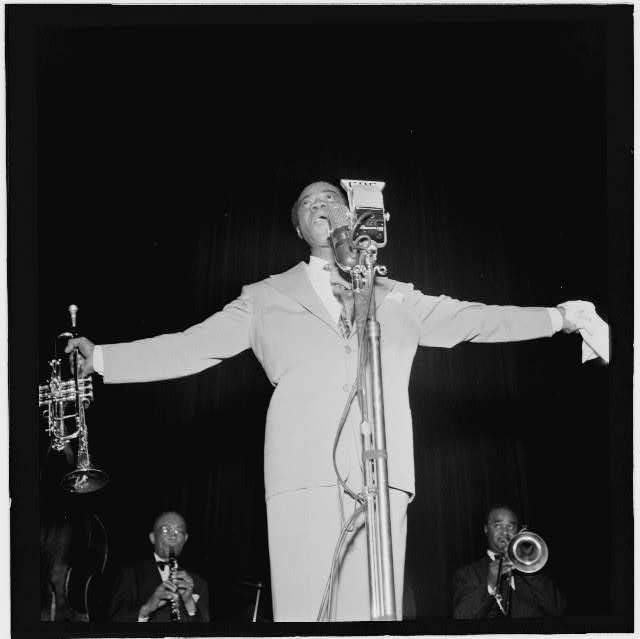 In the spring of 1947, 45-year-old trumpeter Louis Armstrong was considered by some critics and fans to be all but washed up, with his best years behind him and his music rendered irrelevant by the rising force of bebop. For 20 years he had been one of jazzâ€˜s most influential figures. He was appearing in a new movie set in his hometown, New Orleans, and he remained a popular artist. Yet he faced some daunting challenges as commercial and aesthetic styles began to change rapidly, in the years that followed the end of World War II.

The Concert That Changed Everything

A concert at New York City's Town Hall in May of 1947 came to be seen as a turning point for Armstrong. That show placed him in the company of sympathetic musicians like trumpeter Bobby Hackett and trombonist/singer Jack Teagarden.

It also marked the beginning of one of the most interesting stretches of Armstrong's career, a ten-year period that would find him hitting the charts with pop ballads, forming the small group All-Stars (which would sustain him for years as a live performer), and becoming a symbolic ambassador of jazz for the United States during the Cold War.

Jazz writer Dan Morgenstern and historian Michael McGerr join us on this episode of Night Lights with insights into Armstrong's relationship with young bebop musicians, his success with those lushly-orchestrated pop ballads he made for the Decca label, his move to the small-group format, and his cultural significance in the context of the Cold War and the growing civil-rights movement of the 1950s.

Listen to this Night Lights outtake from the show, a segment in which Michael McGerr and Dan Morgenstern talk about Louis Armstrong and Jack Teagarden, followed by Teagarden and Armstrong's performance of "Rockin' Chair" from the 1947 Town Hall concert:

...And here are some more tracks from my interviews with Michael McGerr and Dan Morgenstern:

You can watch Armstrong and Bing Crosby perform "Now You Has Jazz" from the 1956 film High Society, here...

...and for more Louis on Night Lights, see below: