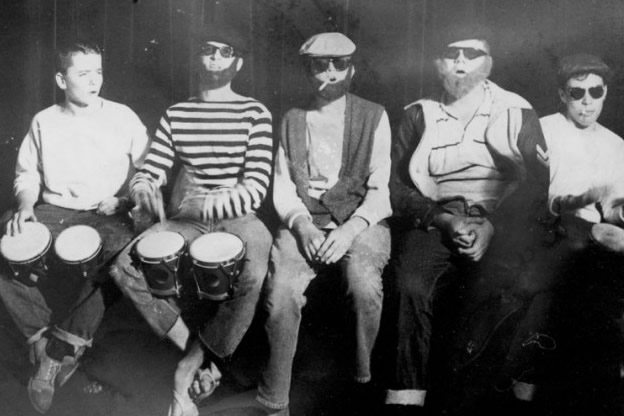 If you lived through the 1980s—and many of us did, in one way or another—you might remember a certain TV commercial that often ran late at night—that often ran, period!--with two hippies sitting in front of their van as they touted the wonders of Freedom Rock, a mail-order Sixties classic rock anthology. On this edition of Night Lights Miles Davis, Nina Simone, Jackie McLean and some other great artists help us give a jazz twist on that commercial’s concept.

When I think about jazz artists and America, I certainly think about Louis Armstrong, who was, of course, a great pioneer of the music, and who thought he’d been born on July 4, 1900, which seemed so perfect that it was a bit sad when researchers determined years after his death that he’d actually been born a year and a month later. But I also think of Duke Ellington, whose incredible compositional tapestry of music, written across five decades of great upheaval, challenges, and change in American life, can almost be seen as a long, ongoing portrait of the country Ellington traveled and all of the people he met during those years.

During the early years of America’s involvement in World War II, the Ellington orchestra often began its concerts with a rendition of “The Star-Spangled Banner”—including its eventually legendary performance at Carnegie Hall in January 1943, when Ellington debuted his Black, Brown and Beige Suite. We’ll hear that recording, and we’ll also hear from Ray Charles, who was asked many times to perform “The Star-Spangled Banner” and who always declined, saying he didn’t think the song was a good fit for his approach, but who did do Quincy Jones’ arrangement of “America the Beautiful” for his 1972 album of social-consciousness songs, A Message From The People. Though it flopped as a single, over the years it became a concert staple for Charles.

Land Of Opportunity, If You Have Enough Dimes To Feed The Jukebox

Saxophonist Eddie Harris wrote a tune in the 1960s that helped inspire the concept of this Night Lights show, titled “Freedom Jazz Dance” which Harris called “a fusion of rhythm and avant-garde." It caught the ear of trumpeter Miles Davis, who recorded it in 1966 with his great quintet of that era that included tenor saxophonist Wayne Shorter and pianist Herbie Hancock. Harris had already broken big at the start of the 1960s when he turned down an offer to tour Europe with Quincy Jones’ orchestra in part because his mother insisted that he make a record--which Harris hadn’t done yet.

The night before the date Harris was out with a woman who’d later become his wife, and heard the movie theme from Exodus on the jukebox. He ended up putting in enough dimes to hear the song 20 times and wrote out the arrangement as he sat at the restaurant table. The ink from his pen soaked through the tablecloth and ruined it; the restaurant demanded that he and his future wife compensate the establishment, and they did, but it was well worth it, because “Exodus” became a huge hit for Eddie Harris. With a title that’s become a metaphor for an oppressed group of people seeking liberation in a new land, “Exodus” seems appropriate for our “Freedom Jazz” show.

Freedom: Are We There Yet?

Two other pieces reflect the yearning and ambivalence of the 1960s civil-rights era, from artists who were each outspoken in their own way about racial injustice in America—singer Nina Simone, and bassist/composer Charles Mingus. Mingus' "Freedom," which he wrote and recorded in the early 1960s, has the mood of a warning lament that captures the edgy vibe of the times.

Simone, who started out singing a not-too-unusual jazz-and-popular-song repertoire in the late 1950s, became one of the most versatile vocalists of the late 1960s in her choice of material, doing just about everything—rock, soul, blues, jazz and pop tunes, and “message” songs as well like “Backlash Blues,” which featured lyrics by poet and Simone friend Langston Hughes. One of Simone’s most noted recordings from this era was her take on Billy Taylor and Dick Dallas’ “I Wish I Knew How It Would Feel to Be Free.” Taylor actually wrote the music for his daughter Kim, and said he liked the song because of its spiritual quality; with the lyrics added, it became widely covered, recorded by artists ranging from soul singer Solomon Burke to the young up-and-coming country-pop star John Denver.

The Founding Father Of Free Jazz

If you throw around the words “free” or “freedom” and “jazz,” sooner or later you’ll be certain to conjure the name of Ornette Coleman, the avant-garde saxophonist who broke through musical barriers in the late 1950s by abandoning conventional chord progressions and structures. His 1960 album Free Jazz, devoted to one long performance of the title composition, gave this emerging movement its name.

That same year Coleman released Change Of The Centurym another album that represented a creative step forward and offered what would become a kind of Coleman “standard,” “Ramblin,” as well as "Free," which one critic praises for the way in which it “features a double-tongued line that races up and down in free time before giving way to the ensemble's totally spontaneous inventions.”

Ornette Coleman was an inspiration to many jazz artists when he emerged on the scene at the end of the 1950s, including some musicians who’d come up in the bebop days, such as fellow alto saxophonist Jackie McLean. In the liner notes to his 1962 album Let Freedom Ring, McLean wrote,

Ornette Coleman has made me stop and think. He has stood up under much criticism, yet he never gives up his cause, freedom of expression.

Speaking of freedom of expression we'll also hear from modern-day jazz singer Rene Marie, who sparked a storm of controversy herself in 2008 when she interpolated the lyrics of James Weldon Johnson’s “Lift Every Voice and Sing,” often referred to as “the black national anthem,” into a performance of “The Star Spangled Banner.” Marie’s now made a studio recording of that interpolation, as a part of her ambitious Voice Of My Beautiful Country CD, and we close out this “Freedom Jazz!” edition of Night Lights with it.