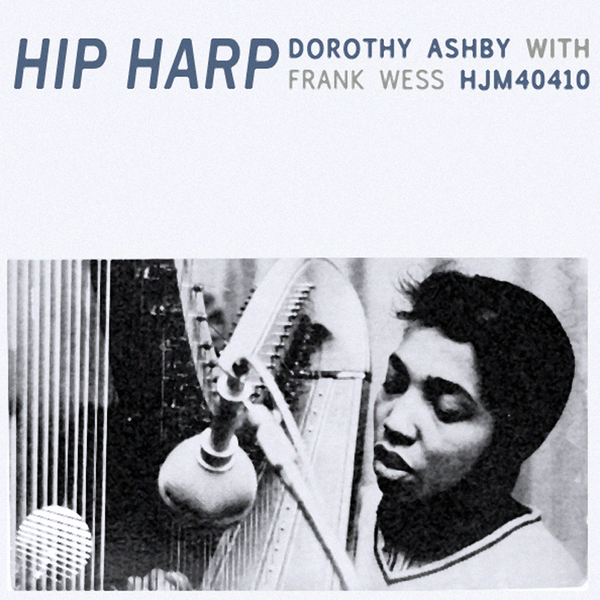 Throughout jazz history the harp has rarely been heard as a soloing or primary instrument, but in the 1950s and 60s Dorothy Ashby, a musician out of Detroit, made a series of albums that showcased her harp playing in big-league jazz settings, and which often featured her own compositions. On this edition of Night Lights we'll hear some of those recordings, ranging from late 1950s bop/modal contexts to late 1960s outings influenced by mysticism and soul.

In a 1950 article for Metronome, jazz promoter Leonard Feather made the case for expanding the repertoire of instruments used in jazz, calling for a "Bud Powell of the harpsichord, a Charlie Parker of the flute, or an Oscar Pettiford of the bassoon." Eight years later Feather's article was invoked by critic Ira Gitler in the liner notes for an album called Hip Harp, and in Gitler's view, the Bud Powell of the harp, at least, had arrived, in the person of Dorothy Ashby.

Born in Detroit, Michigan in 1932, Ashby started out playing piano, and learned much about music from her jazz guitarist father. She took up the harp while studying at Cass Tech, a legendary school that a number of other notable Detroit jazz musicians passed through, including a fellow future jazz harpist, Alice Coltrane. Ashby also studied piano and music education at Wayne State University, and when she first made her way onto the Detroit jazz scene of the early 1950s, it was as a pianist; "I didn't even own a harp," she told jazz historian Sally Placksin. But she eventually acquired one and committed herself to one of the most unusual paths in jazz:

I just tried to transfer the things that I had heard and the things that I wanted to do as a jazz player to the harp. Nobody had ever told me these things shouldn't be done, or were not usually done on the harp, because I didn't hear it any other way. The only thing I was interested in doing was playing jazz on the harp.

Being a jazz harpist presented many challenges for Ashby. The improvisations and musical structures of jazz were more difficult to execute on a harp than on other instruments, and even achieving the kind of mastery that Ashby attained did little to undercut the prejudices of the professional music business. Talking about the national scene, Ashby said that "Often the harpists who got write-ups and the media coverage were very pretty, and that seemed to be about all that they were interested in." Even in her hometown of Detroit, where talent counted most, the notion of harp as a jazz instrument was initially met with skepticism.

"The word ‘harp' seemed to just scare people," Ashby told jazz historian Sally Placksin. She said that club owners, certain that she would play chamber music, sometimes refused to even give her an audition. But she aggressively pursued gigs of all kinds, and eventually made inroads into the nightclub scene. By the late 1950s she was signed to Prestige Records, where she made two albums in quick succession that furthered her growing reputation, and which once again utilized frequent early collaborator Frank Wess on flute:

Ashby generally received good notices from jazz writers of the day; in his liner notes for the album SOFT WINDS, Ira Gitler said, "Dorothy Ashby may not be the first jazz harpist or the first female jazz harpist, but her feeling for time and ability to construct melodic guitar-like lines mark her as the most accomplished modern jazz harpist…. Orrin Keepnews paid her a high compliment when he said that she reminded him of Wes Montgomery." Ashby also demonstrated a gift for writing catchy, often-minor-key melodies, and knowing how they would translate to harp. Speaking to jazz historian Sally Placksin about the harp's complexity, Ashby said,

Even arrangers admit that often they don't know how to write what they'd like to write. What they would be willing to write for harp often doesn't work, because they're writing from a pianistic point of view, or maybe another instrumental point of view, and that doesn't work on a harp, because you can only change two pedals at a time, and various other technicalities…. The harp has complexities that a person has to be able to work out in their head while they're spontaneously creating jazz on it.

That same year Ashby won DownBeat critics' and readers' awards. Her touring trio, which included drummer and husband John Ashby, worked frequently, and she appeared with Louis Armstrong, Woody Herman, and other marquee jazz acts. Ashby's discography went quiet for a couple of years, however, until she re-emerged in 1965 with The Fantastic Jazz Harp Of Dorothy Ashby. While most of her albums had been made in a trio or quartet context, this date added four trombones to some of the selections, and the results added to Ashby's file of positive jazz-press notices. One reviewer, his comments reflecting in part the continuing prejudice against harps in jazz, wrote that "This isn't just novelty, though that is what you expect. The harp has a clean jazz voice with a resonance and syncopation that turn familiar jazz phrasing inside out:"

Some, if not much, of Ashby's musical output from this period remains unheard. She and husband John Ashby ran a black theater company called the Ashby Players of Detroit that presented plays and musicals which addressed the African-American experience; John Ashby wrote many of the scripts, and Dorothy Ashby often composed the music for these productions, recording it on reel-to-reel tapes that have never been released. She also hosted a jazz radio show in Detroit during the 1960s called "The Lab."

Several years passed before Ashby recorded again commercially as a leader, when Chicago soul maven Richard Evans got her signed to Cadet Records. On her 1968 album Afro-Harping, produced by Evans, Ashby sounded in tune with the times, and her jazz harp, once considered so exotic, now seemed a good fit for the psychedelic tapestry of the late 1960s:

In the early 1970s Ashby and her husband moved to California, and she found a fair amount of studio work in the dayglow musical landscape of that place and time, recording with Bill Withers, Stevie Wonder, Freddie Hubbard, Stanley Turrentine, Earth, Wind and Fire, Diana Ross, and other notable jazz, pop and R & B musicians. She made more recordings as a jazz artist in the mid-1980s, but died in 1986 at the age of 55, at a time when she might have been a prime candidate for rediscovery by a new generation of listeners. Writing about Ashby for NPR in 2006, Tom Moon said, "Anyone who can make a massive instrument like the concert harp dance — and use it to swing in such a cool, low-key way — deserves to be more than a footnote."

We close with music from Ashby's 1970 album The Rubaiyat Of Dorothy Ashby, inspired by the writings of Persian scholar and poet Omar Khayyam. Chicago soul wizard Richard Evans once again produced, and Ashby stretched her musical reach in his jazz-funk settings with electrified harp, koto, and vocals:

Outtakes from the show: