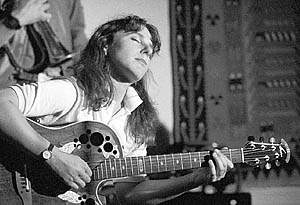 Emily Remler was a rising-star jazz guitarist in the 1980s. Her style, influenced by Wes Montgomery, fused hard swing and lyricism with Brazilian and other forms of music, and made her one of the most compelling newcomers around. Remler did not let the notoriously sexist barriers of the jazz world deter her from her passion for playing music. Early on in her career, she landed a contract with Concord Records. Her ultimate obstacle, however, proved to be fatal: an addiction to heroin.

Remler died in Australia on May 4, 1990 at the age of 32. In this program we‘ll hear music from her albums East to Wes, Take Two, and This Is Me, as well as collaborations with Larry Coryell, Ray Brown, and Susannah McCorkle. We also talk with drummer and friend of Remler, Robert Jospe, who knew and worked with her in the mid-1980s while she was staying in Charlottesville, Virginia.

A solo performance of "Afro Blue":