Crossing The Bridge: The Return Of Sonny Rollins 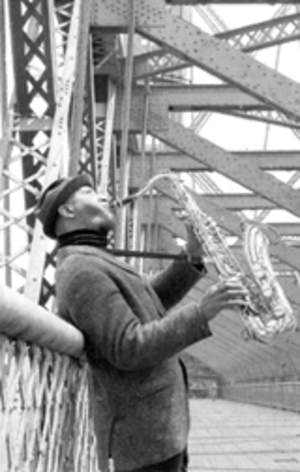 In 1959 Sonny Rollins, not quite 30 years old but touted by many as the best tenor saxophonist of his time, suddenly vanished from the music scene. For the next two years he was the missing-in-action man of jazz, never performing in public, living without a telephone, practicing by himself atop the Williamsburg Bridge. In 1961 he returned, forming new musical alliances as he plunged into the shifting and vibrant landscape of the early-1960s world of jazz. On this edition of Night Lights we'll hear him with guitarist Jim Hall, cornetist Don Cherry, and fellow tenor giant Coleman Hawkins.

In the July 1961 issue of Metronome Magazine, jazz writer Ralph Berton published an article about a legendary saxophonist that he'd encountered practicing on the Brooklyn Bridge:

When I first heard the sound I thought that I had imagined it. It was an improbable one to hear in the middle of that bridge, the sound of a tenor sax, floating to me in faint recurring fragments through the bright empty air, like footnotes to the remote desultory lowing of tugs on the river far belowâ€¦ tenor sax. Jazz tenor sax. Expert, first-class jazz tenor sax, the sound of a masterâ€¦. He was running weird changes and curves, jumping octaves with the smooth stride of an Olympic hurdle-racer.

Berton called the saxophonist "Buster Jones," but the saxophonist was Sonny Rollins, and the bridge was actually the Williamsburg Bridge, not that far from where Rollins lived. At this point Rollins, who throughout the mid-to-late 1950s had been touted as the leading saxophonist in jazz, had been off the jazz scene for nearly two years, and rumors were rife as to why he was absent. Martin Williams reported some of them: that he was taking up a new instrument, writing long compositions, or preparing to return as a solo performer only. Other explanations portrayed him as retreating from the adulation he'd received and the competition he was now facing in the surging force of saxophonists John Coltrane and Ornette Coleman.

In a way this was not Rollins' first sabbatical-he had also withdrawn from the jazz scene for some time in the mid-1950s after kicking his drug addiction, only to resume playing with trumpeter Clifford Brown and drummer Max Roach's quintet. But the reasons were different this time. "I wasn't capable of withstanding the distractions," he told DownBeat writer Bill Coss in late 1961. He also alluded to the jazz press' elevation of him, saying, "I began to believe my notices, and I couldn't live up to them. That's another thing I've learned to do. I've stopped reading the critics. They really hurt me." He also said that

When I quit, I suppose I had the intention of changing myself drastically, my whole approach to the horn. I realized after awhile that that wasn't what was needed or what was bothering me. So, instead, I began to study what I had been doing, and I explored all the possibilities of that.

During his sabbatical Rollins lived off his recording royalties and his wife's income. He studied philosophy, lifted weights, and practiced on the Williamsburg Bridge-a location chosen because he did not want to disturb his neighbors. Usually he was alone, but sometimes soprano saxophonist Steve Lacy joined him. "You're just suspended out there," he told Coss. "You feel as if you're on top of everything, and you can see so far and so much, and so much of it is beautiful. I can blow as hard as I want there and look and be impressed. It gave me a kind of perspective about music, people, everything really, that I had never had before."

In late 1961 a combination of financial need brought on by extensive dental work and a feeling that he was ready to perform in public again brought Rollins back to the jazz scene. He signed a lucrative recording contract with RCA, embarking on a three-year period that would yield a diverse and sometimes-controversial body of work, and he put together a new working group that included guitarist Jim Hall and bassist Bob Cranshaw. Rollins told Whitney Balliett that he wanted to do more things with harmony, and that Hall would give him the framework. He also revealed to Leonard Feather that he'd even considered using a trio-only context of himself, Hall, and Cranshaw, but that drummer Ben Riley had been able to fit into the sound that Rollins was seeking. At the beginning of 1962 they made Rollins' first studio recording date in more than three years, called, appropriately enough, The Bridge.

Jazz journalist Whitney Balliett also interviewed Rollins shortly after his return to the scene in late 1961, praising him as "a heroic monk." "A tall, broad-shouldered, thin-waisted man," Balliett wrote, "who resembles a genie, Rollins has a shaved head, a long, lemon-shaped face, slightly Oriental eyes, a generous nose, and a full, non-pointed goatee." The shaved head was a new look, but some critics and fans found Rollins' sound less new than expected. Although Ira Gitler gave The Bridge five stars in DownBeat when it was released, and the album got a positive reception in general some critics found it not as different as they might have expected from the post-sabbatical Rollins.

"I know that some people will be disappointed that I haven't come back on the scene with some brand new thing," he told DownBeat writer Bill Coss. "But I did come back with a brand new thing--me." And indeed Rollins' sound had changed, with some finding it more adventurous and engaging, and others finding it harsher and less compelling. "In one quality alone he may range from early Bud Freeman-like honkings and abrasive split notes to vibratoless subtones and expansively sensuous sounds in the grand manner of Coleman Hawkins," Dick Hadlock wrote in DownBeat while reviewing a Rollins quartet performance at San Francisco's Jazz Workshop:

His solos are uneven, as one might expect of a man who searches and takes chances, but they are almost always moving towards something. And when Rollins finally strikes the something he is seeking, it's a fine moment for musicians and listeners alike.

Perhaps a punning reference to these concerns, Rollins' second RCA album was entitled What's New (the song itself was not included), and it did feature Rollins venturing into the realm of both bossa-nova on "The Night Has A Thousand Eyes" and outside explorations like "Jungoso." Watch the Sonny Rollins Quartet performing one of the songs from the album, "If Ever I Would Leave You", in 1962:

One of Rollins' last public sightings before his sabbatical had been at an Ornette Coleman show at the Five Spot in late 1959, and there was some speculation that the advent of Coleman's revolutionary approach, which broke free of conventional harmonic and rhythmic structures, had helped spur Rollins' withdrawal from the scene. Upon Rollins' return, there was further speculation that he would somehow reflect or respond to the influence of Coleman and other musicians such as Cecil Taylor and Eric Dolphy who were in the vanguard of what would come to be called "the New Thing."

Rollins' first two albums for RCA had given occasional hints of his response, and Whitney Balliett noted it even more in his live performances, writing that

Like those of Ornette Coleman and Cecil Taylor, Rollins' solos, free of the rule-sticks of measures and choruses, are in each case an attempt to fashion an individual composition. They are also free of dependence on chord structures and ordinary four-four time. Rollins, however, is kinder to his listeners than Coleman and Taylor. In the course of a solo, he will return repeatedly to the theme or rhythmic motif on which it is based, placing signposts in the snows of his variations. But he is never straightforward.

Rollins' answer to the free-jazz movement emerged full-force in 1962 when he brought two members of Coleman's quartet, trumpeter Don Cherry and drummer Billy Higgins, into his own group, with Bob Cranshaw and later Henry Grimes on bass. This group made only a handful of official recordings for RCA, presented mostly in edited or studio-shortened form, but the frontline intensity of Rollins and Cherry together, trading off long, spiky, and spiraling solos, was formidable. Jazz critic Leroi Jones hailed the Rollins-Cherry alliance, saying that the live album Our Man In Jazz "finally begins to tell the whole story" of Rollins' post-sabbatical evolution, and dubbing the group "The Assassins."

"We Have To Make Ourselves As Perfect As We Can"

Rollins and Cherry would go their separate ways in 1963, and after making more records for RCA that delved into both jazz and Great American songbook standards, Rollins signed with Impulse Records. He would take another sabbatical at the end of the 1960s, this time traveling to India. It was all part of Rollins' quest, as he had told Ralph Berton in 1961: "I think we're here to do good. We have to make ourselves as perfect as we can, in mind and body, in order to give the world the truth that we have inside ourselves." We close out this edition of Night Lights with another encounter between Rollins and an idol of his youth, the great tenor saxophonist Coleman Hawkins, recorded in the summer of 1963, two years after Rollins' return from the bridge: "Yesterdays."

The Other Side Of The Bridge