Conover's Coming Over: Willis Conover And Jazz At The VOA 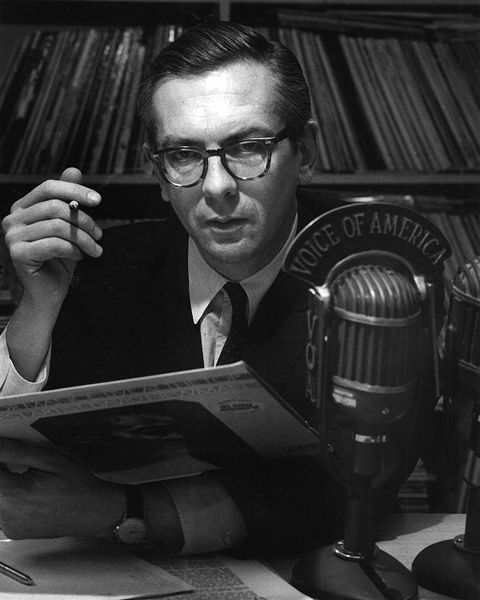 "Willis Conover did more to crumble the Berlin wall and bring about collapse of the Soviet empire than all the Cold War presidents put together," jazz writer Gene Lees once said.

Working for decades as a broadcaster for the Voice of America, Conover was perhaps the most influential and widely-heard jazz DJ of the 20th century. He brought the music into eastern Europe and other areas of the world where jazz was either repressed or commercially unavailable, helping to bridge the cultural gap between Western and Communist-bloc countries.

In addition to the many fans he garnered around the globe, Conover counted jazz greats such as Duke Ellington among his friends. An advocate of breaking down racial barriers, a proponent and MC for the Newport Jazz Festival, and a force behind the National Endowment for the Art's funding of jazz, Conover left his imprint upon the American jazz scene as well, but Congressional restrictions prevented his program Music USA from being aired in the United States, and consequently he remained, in some ways, a stranger in his own country.

He was a sophisticated but lonely man who sacrificed much of his personal life for what he viewed as his calling-promoting jazz throughout the world over the Voice of America airwaves. He passed away in 1996 after a long battle with cancer, his efforts and achievements largely unrecognized by his own government.

We'll talk with Conover biographer Terence Ripmaster, author of Willis Conover: Broadcasting Jazz to the World, and we'll hear excerpts of some Conover broadcasts, as well as artists that Conover promoted or inspired, such as The Orchestra (featuring an appearance by Charlie Parker and a rare recording of an early Johnny Mandel arrangement) and pianist Adam Makowicz. We'll also hear a tribute from legendary jazz producer George Avakian, and two musical recordings that Conover made with guitarist Charlie Byrd-"Far Off, Close By" (Conover's so-called "whistling" song") and "The Empty Streets" (featuring a haunting late-night recital by the DJ).

Jazz writer Doug Ramsey has posted periodically about Conover and you can read his thoughts and reflections here, here, here and here. He also noted a tribute concert for Conover this past autumn.

Read about the 70th-birthday party for Duke Ellington that Conover organized and hosted at the White House in 1969.

You can hear Conover's introduction to his Voice of America jazz program in this brief video tribute clip:

Special thanks to Terry Ripmaster, Doug Ramsey, Michael McGerr, and George Avakian for their assistance with this program.