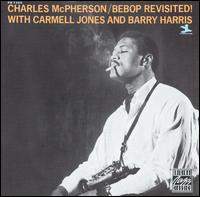 Charles McPherson is an alto saxophonist who spent much of his early career under the spell of jazz great Charlie Parker,but who fired the Parker sound with his own intense energy and expressive skills. Championed by jazz writer Ira Gitler, McPherson made a number of records for Prestige throughout the mid-to-late 1960s, garnering generally good reviews and gaining notice in a 1967 Downbeat critics‘ poll as "talent most deserving of wider recognition." But it was the era of the avant-garde, Miles Davis‘ second great quintet, and the emerging influence of rock. McPherson‘s bebop-steeped sound struck some as antiquated.

In a 1968 interview with Chris Albertson, McPherson criticized his contemporaries, who 'segregated' themselves from certain kinds of music. "I don‘t understand how cats can be my age and have missed Bird," he said. "For instance, if a cat is studying psychology, he‘s just got to read something about Freud. A musician must go way back and listen to all of it, all kinds of music..not just jazz. All the great cats did that; they knew no musical boundaries, they knew they couldn‘t afford to be prejudiced." Citing his habit of listening to everything from Louis Armstrong and Bessie Smith to Stravinsky and Bach, McPherson said, "I learn from all of those cats, they all express beauty. There are still some of us who really dig love and beauty."