Cafe Society: The Wrong Place For The Right People 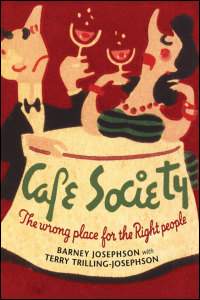 At the end of 1938, Barney Josephson, a former shoe salesman, opened what would become one of the most legendary nightspots in jazz history. New York City's first integrated nightclub, Cafe Society quickly became a gathering place for artists, intellectuals, left-wing political figures, jazz lovers, and, perhaps inevitably, the very Manhattan sophisticates it meant to mock with its satirical murals and ill-dressed doormen.

New York City, 1939. It was the year of the World's Fair, when the city looked to the future with wonder; it was also a time when citizens looked with growing anxiety at the spectre of war in Europe. The Depression still lingered. Hollywood was having one of its greatest-ever seasons, with the release of such films as Gone with the Wind, Ninotchka and The Wizard of Oz.

In lower Manhattan, Barney Josephson was presiding over the city's first integrated nightclub, which he'd started with a couple of small loans and an intense, groundbreaking vision. Josephson's comedians and MCs were edgy young talents like Jack Guilford and Zero Mostel. His décor was provided by Manhattan artists, who painted lavish and satirical send-ups of high society life on the walls. His politics were Popular Front, the broad leftist coalition of the 1930s. Celebrities, from Paul Robeson and Langston Hughes to Dashielle Hammett, Nelson Rockefeller and Eleanor Roosevelt, rubbed shoulders with students, labor leaders and jazz lovers.

Café Society musical acts were often suggested by John Hammond, the young aristrocrat who would help elevate the careers of performers from Billie Holiday and Count Basie to Bob Dylan and Bruce Springsteen. (Holiday debuted her version of the harrowing anti-lynching anthem "Strange Fruit" at Cafe Society; sixty years later, Time Magazine would declare it "the song of the century.")