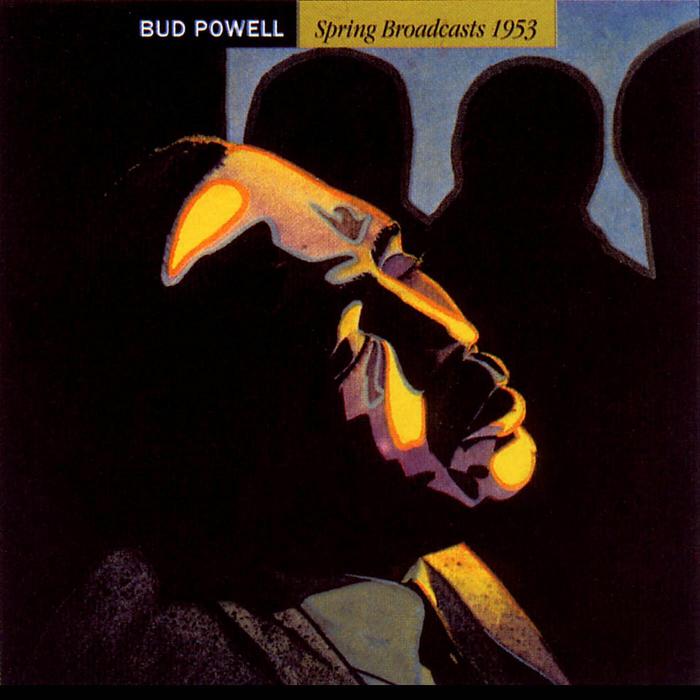 Pianist Bud Powell was a leading light of the 1940s bebop generation, often touted as the man who first applied bop‘s revolutionary approach to the keyboard. As he rose in the New York City jazz world, Powell spent several long stretches of his prime in institutions and hospitals, suffering primitive and sometimes-abusive psychiatric treatment. After 1953 his creative star would burn unevenly for the remaining 13 years of his life, but he had already established a legacy on records and in live performances as well that would make him one of the most significant pianists in jazz history.

"To have heard Bud Powell at his zenith was one of the most exhilarating experiences in jazz," the critic Ira Gitler once wrote. "He hung the audience by its nerve ends, playing music of demonically driven beauty, music of hard, unflinching swing, music of genius." On stage, immersed in that music, Powell was a portrait of intensity, Gitler describing Powell‘s

right leg digging into the floor at an odd angle, pants leg up to almost the top of the shin, shoulders hunched, upper lip tight against his teeth, mouth emitting an accompanying guttural sound to what the steel fingers were playing, vein in temple throbbing violently as perspiration popped out all over his scalp and ran down his face and neck.

Writer Gary Giddins has said of the music itself,

A piano prodigy with formal classical training, Powell had just turned 19 when he joined the band of trumpeter and former Duke Ellington sideman Cootie Williams in late 1943, and it‘s there that we can begin to hear the emergence of this extraordinary talent. For the next 10 years Bud Powell, in spite of personal difficulties, crude, abusive medical treatments, and prolonged absences from the scene spent in institutions, would create some of the most compelling jazz of the 20th century, influencing an entire generation of pianists who followed him. And while his studio recordings from this era offer more than adequate testament to his brilliance, there‘s also a fair scattering of live performances, broadcasts and airshots that give us an even more comprehensive idea of what the young Powell could do.

A Will To Play

Something bad happened to Bud Powell in 1945-he was beaten by policemen in Philadelphia, suffering head injuries that some friends said effected a permanent change in the young pianist. Nevertheless his playing continued to evolve. After making a spate of landmark record dates with bebop comrades such as Dexter Gordon and Charlie Parker, and waxing some unreleased trio sides, Powell spent nearly all of 1948 in New York State‘s Creedmore Hospital. He was sedated, given shock treatments, and at first was not allowed to play the hospital‘s piano. Friend and fellow pianist Elmo Hope reported that Powell responded by drawing a keyboard on the wall of his cell and moving his fingers over it.

Released in October of 1948, Powell returned to the 52nd Street scene in New York. Over the next year, despite being rehospitalized for several months, he was able to do some recording sessions under his own name that would go a long way towards establishing his musical legacy. He continued to deliver towering live performances around New York City as well; this program features a broadcast from the Royal Roost in 1948 with an all-star bebop group and a trio performance at Carnegie Hall in 1949.

Trumpeter Dizzy Gillespie once called Bud Powell "the definitive pianist of the bebop era," praising Powell‘s fluidity of phrasing. Powell could execute bebop‘s demanding runs with remarkable speed, add his own flourishes of beauty, and ripple with rhythmic and harmonic invention for chorus after chorus. "He could make the piano wail with the nuances and inflections of a horn," Len Lyons wrote. And Powell‘s comping behind other soloists set the standard, as jazz historian Alyn Shipton has noted, citing Powell‘s "stabbing, unevenly placed chords, each emphasizing changes to the underlying harmony."

Brashly confident in his talent, the young Powell was also one of the few who could play the challenging foil to a bebop giant such as Charlie Parker. Powell was also best friends with the godfather of New York City bebop, fellow pianist Thelonious Monk. Monk was an early mentor to Powell, and Powell returned the favor by being one of the first to record Monk‘s music in the 1940s. Monk‘s immortal "Round Midnight" was, in fact, first waxed by Cootie Williams‘ band when Powell was its pianist. We‘ll hear Powell doing that song and another bop-era standard live with Charlie Parker at the start of the 1950s.

One Year At Birdland

In 1951 Powell was arrested along with Thelonious Monk after police officers found drugs in the car in which they were sitting. A traumatic experience in New York‘s Tombs prison and a lengthy hospitalization followed, taking Powell off the scene for almost all of 1952.

Released from the hospital in early 1953, Powell began to play regularly at Birdland and lived in a small penthouse apartment, his life closely supervised by Birdland manager Oscar Goodstein. Only 28, he continued to perform at a superlative level. In May he went up to Toronto to play an all-star bebop summit that became known as "The Greatest Jazz Concert Ever," featuring Powell in a quintet with Charlie Parker, Dizzy Gillespie, Charles Mingus, and Max Roach, and in one set as a trio with Mingus and Roach. From that concert we‘ll hear the trio‘s take on "Cherokee," along with a Birdland broadcast from the spring of 1953.

In August of 1953 Ebony Magazine ran a six-page profile of Powell with the title, "Can a Musician Return From the Brink of Insanity?" Taking a generally sympathetic and detailed look at Powell‘s past and present, the article gave the pianist unprecedented mainstream recognition and offered a hopeful prognosis for his future. Powell continued to compose, record, and perform; but jazz writer Ira Gitler noticed that something seemed to be going wrong, that during his Birdland gigs the pianist would sometimes turn and give the audience a fixed, grinning, eerie stare.

By the end of 1953, the toll of the past decade‘s beatings, shock treatments, hospitalizations, drug and alcohol abuse, and the recent grueling work schedule at Birdland had finally overtaken Powell and his prodigious energies. Pianist Henri Renaud recalled him sitting alone in a darkened corner of Birdland between sets, telling Oscar Goodstein that he thought he was playing badly. For the rest of his life Powell‘s youthful brilliance would periodically disappear and resurface like an underground river, and the story of his later years, including his expatriate time in France, would be mythologized in the film Round Midnight. His broadcasts from Birdland in the fall of 1953 catch the last vestiges of his early power and command: the luminous, autumnal glow of genius in the face of lengthening shadows.

Bud Powell fans have long wished for a good, comprehensive biography of the pianist. Peter Pullman, who edited one of the best resources on Powell to date, the booklet for The Complete Bud Powell On Verve, has long been at work on such a biography, and it will soon be available as a Kindle or download through Pullman's website:

Wail: The Life Of Bud Powell

The Bad Plus pianist and Do The Math blogger Ethan Iverson has a post up about Powell that includes more background about Pullman's book:

...as well as links to Iverson's well-worth-reading analysis of Powell's music