After Brubeck: Paul Desmond In The 1970s 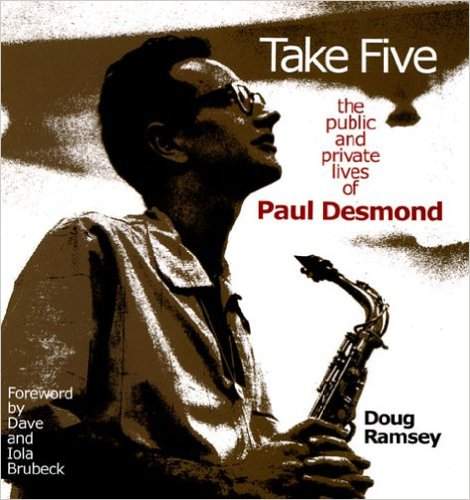 Alto saxophonist Paul Desmond is best known for the key role that he played for many years as a member of pianist Dave Brubeck's 1950s and 60s quartet-but what did Desmond do after the Brubeck group disbanded at the end of 1967? In the next hour we'll hear some of the studio and concert recordings that Desmond made in his post-Brubeck era, both as a leader and with musicians such as Chet Baker and the Modern Jazz Quartet, as well as a duet reunion with Brubeck himself. We'll also talk with Desmond friend and biographer Doug Ramsey, author of Take Five: The Public and Private Lives of Paul Desmond.

A Sense Of Relief

On December 26, 1967, the Dave Brubeck Quartet, one of the most popular jazz acts of the post-World War II era, gave what its members thought at the time might be its final performance. Paul Desmond, the group's alto saxophonist, had written its biggest hit, "Take Five," the royalties of which would enable him to live comfortably for the rest of his life-and his playing, once playfully described by Desmond himself as an attempt to emulate the quality of "a dry martini," had helped give the group its airy, lyrical, and fluently melodic sound. Desmond was 43 years old, suddenly with more free time on his hands than he'd had in decades. According to Doug Ramsey, the Brubeck quartet had ended not in acrimony, but rather out of road weariness, leaving all of its members in a state of relief.

At first Desmond pursued a sophisticated, laidback Manhattan bachelor lifestyle in the wake of the Brubeck Quartet's disbanding. Eventually, though, he began to make recordings under his own name, as he had done for RCA in the early 1960s. His outings for the A and M label at the end of the 1960s included an album of songs by the popular folk-pop duo Simon and Garfunkel, and an album called Summertime, that led off with "Samba With Some Barbeque," Desmond's Latinized take on a Louis Armstrong classic.

In spite of these studio efforts, Desmond all but ceased live performances in the years immediately following the demise of the Brubeck quartet. One notable exception, however, came in April 1969, when Desmond was part of an all-star band that played for Duke Ellington's 70th birthday at the White House, hosted by President Richard Nixon. Doug Ramsey attended the black-tie dinner and noticed Ellington nodding with enthusiastic approval at Desmond's uncanny imitation of Ellington saxophonist Johnny Hodges on "Things Ain't What They Used To Be."

Desmond registered another significant appearance more than two years later, when he appeared at New York City's Town Hall with the Modern Jazz Quartet on Christmas Day. Desmond was friends with the band's leader and pianist John Lewis and had recorded with both the MJQ's drummer Connie Kay and its bassist Percy Heath in the 1960s, but he proved to be musically simpatico with the entire group, including vibraphonist Milt Jackson. Doug Ramsey was at this concert as well, and observed Jackson's take-notice response to Desmond's playing.

CTI, A Reunion, And A New Partner

In these first post-Brubeck Quartet years, Desmond, who was well-read and quick-witted, and the author of a number of entertaining liner notes, talked about taking up writing, with plans of producing a memoir about his time with Brubeck (its working title was How Many Of You Are There In The Quartet?). Only one chapter, however, ever appeared in print. Doug Ramsey recalls Desmond's active interest in women as well, but ultimately he would return to another passion. As Desmond himself said, "After three years of premature indolence I discovered that playing saxophone is really the best thing in the world to do." In the early 1970s he began to record for Creed Taylor's CTI label, both as a leader and as a sideman, leading to what some critics feel is his best album from his post-Brubeck years, Pure Desmond.

Throughout his mid-1970s CTI period Desmond popped up on records by label-mates such as guitarist Jim Hall, trumpeter Chet Baker, and arranger Don Sebesky. He also found himself in a familiar setting, playing again with Dave Brubeck, sometimes as part of the reunited quartet, and in other contexts as well, including an album of duets in 1975 that were inspired by the pair's performances on a cruise ship. Doug Ramsey says it's no surprise that the two men could still find musical chemistry together, given their previous, lengthy musical partnership and the rapport that they'd sustained in the years following the breakup of the Brubeck Quartet.

That same year a new musical partner helped spark Desmond back to doing live gigs again-guitarist Ed Bickert, who had worked with the saxophonist on Pure Desmond. Bickert anchored the trio that backed Desmond for a series of recorded performances in Toronto that capture him at one of his post-Brubeck Quartet peaks. Writing about Desmond's solo from his composition "Wendy" at one of these shows, Stuart Nicholson said,

It is assembled in a way similar to constructing a house of cards. Each fragile phrase is laid out, one on top of the other, the melodic continuity of his ideas wholly dependent on the relationship of what has preceded it. It creates a beguiling tension in that the further his solo progresses, the greater the chance that the next card he lays might bring the whole crashing to the ground. It never happens, of course; instead he assembles a series of quietly beautiful ideas that are the essence of his art.

Desmond's return to live performing, both as a leader and in other contexts such as Brubeck Quartet reunions, proved sadly to be short-lived. In 1976 Doug Ramsey got a phone call from the saxophonist, who informed him that he had been diagnosed with lung cancer. Over the next year his health would steadily deteriorate as he made a handful of concert appearances and recording dates. His last solo was recorded with singer Art Garfunkel in March of 1977, on the song "Mr. Shuck and Jive." He had also managed to record several solos with Chet Baker around the same time, saying after several takes, "That's all I got."

Desmond died on May 30, 1977 at the age of 52, on Memorial Day. Pianist Marian McPartland said, in response to the news, "It's just like Paul to slip away quietly when everyone's out of town, not to bother anybody." In memoriam DownBeat Magazine wrote, "Desmond was such an important factor in the growth of what we now call modern jazz that to mention his feats would be superfluous."

Desmond's music reflected the sensitivity, wit, and originality that endeared him to his circle of companions. This edition of Night Lights closes with Doug Ramsey's remembrance of his friend and one of the very last recordings that Desmond made, in February of 1977 with trumpeter Chet Baker-"You Can't Go Home Again."

Listen to Desmond on "Things Ain't What They Used To Be" at a 1969 White House birthday tribute to Duke Ellington: