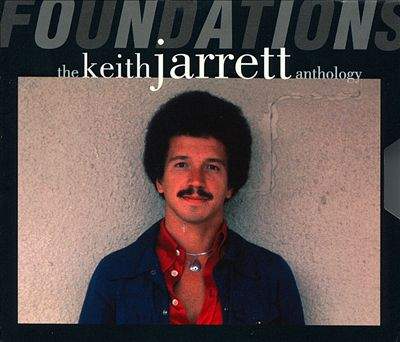 In the mid-1960s a new jazz pianist arrived on the scene who was lyrical and adventurous, pastoral and funky, reflective and propulsive, a driven improviser in a wide variety of settings, including Art Blakey's Jazz Messengers, the Charles Lloyd Quartet, Miles Davis' electric ensembles, and as the leader of his own groups. He was also noted for the agony-and-the-ecstasy physicality of his playing, writhing, contorting, and grunting or crying out loudly as he performed. On this edition of Night Lights we explore the early years of a modern jazz giant: Keith Jarrett.

"People have remarked that I seem to be having a love affair with the piano when I play," Keith Jarrett once wrote. "The truth is that it is a wrestling match." The love affair and/or wrestling match began early for Jarrett, who was born in Allentown, Pennsylvania on May 8, 1945. A child prodigy on piano, and showing an aptitude for other instruments as well, including drums, Jarrett appeared on the "King of Jazz" Paul Whiteman's TV talent show, and performed a two-hour classical concert when he was only seven, a premonition of the extended solo performances for which he'd become famous in the 1970s.

As a teenager Jarrett worked briefly at a hazardous place called "the Finger Factory" because so many of its employees lost fingers in the machinery, but a steady gig just outside of Allentown enabled him to leave. His youthful professional experiences also included traveling with Fred Waring and His Pennsylvanians. While touring with Waring he saw the Bill Evans Trio for the first time, featuring two musicians with whom he'd eventually forge long relationships: drummer Paul Motian and bassist Gary Peacock. After being admitted to the Berklee School of Music in Boston, partly through a scholarship from DownBeat Magazine, Jarrett got kicked out for playing on the interior strings of the piano. He continued to gig around Boston, but in late 1964 he married and moved to New York City, where he took the subway regularly to the Village Vanguard on Monday nights, hoping to sit in.

Jarrett's big break came when a fellow former Berklee student showed up at the Vanguard one evening and brought him on-stage with him; drummer Art Blakey happened to be at the club that night, liked what he heard, and invited Jarrett to take the piano chair in a different kind of academy, the hardbop school of the Jazz Messengers. One of Jarrett's bandmates in the Messengers was a young Chuck Mangione. Jarrett didn't stay long; he told an interviewer in 1969 that "being a drummer myself, I had a conception completely opposed to Blakey's, and it was a constant struggle."

Jarrett made only one recording with Blakey, the live album Buttercorn Lady, but as Jarrett biographer Ian Carr observes, "the main elements of his mature style are already apparent: the brilliant linear runs, the dramatic use of space, the audacious liberties he takes with the harmonies and the basic pulse." Carr also notes critic Leonard Feather's observation that Jarrett's solos on the album "contain in them the entire history of jazz piano."

Jarrett's next musical stop found him in one of the most popular new jazz acts of the mid-1960s--the Charles Lloyd Quartet. Lloyd was a charismatic saxophonist and flutist who'd broken in with Chico Hamilton's West Coast group and was now striking out on his own as a leader. He'd heard Jarrett in Boston and brought him together with two other young musicians, including a drummer who would prove to be one of Jarrett's most significant and long-running musical partners, Jack DeJohnette.

Managed by the legendary producer George Avakian, the Charles Lloyd quartet became one of the most dynamic and successful small groups of the mid-to-late 1960s, creating an exploratory, fore-runner-of-fusion sound with crossover appeal to young psychedelic rock audiences, fueled in large part by the rhythmic interplay of Jarrett and DeJohnette. At the age of 21, the young pianist was already in the jazz limelight.

Rising From The Ruin

Jarrett and DeJohnette left Lloyd's group in the late 1960s after becoming dissatisfied with what they saw as declining musicianship on the part of the leader. Jarrett stayed under the managerial umbrella of George Avakian and continued work with his own trio that he had formed while still with Lloyd, featuring two older, well-established colleagues-bassist Charlie Haden and drummer Paul Motian. Both would figure prominently in Jarrett's 1970s American quartet. This early trio has often been overshadowed by the long-running "Standards" trio that Jarrett started in the 1980s with Jack DeJohnette and bassist Gary Peacock, but it shows Jarrett already wielding a stylistically diverse command of his instrument.

Jarrett also recorded a solo album for Atlantic called Restoration Ruin, on which he played ten different instruments and sang lyrics that he'd written. DownBeat Magazine panned what it called "this circus of a record," stating its "hope that this consummately dreadful album serves as a cathartic, that it has gotten all the garbage out of Jarrett's system so that he can return to his brilliant, vital inventive piano music." George Avakian said he was embarrassed by Jarrett's experimental outing and that Atlantic executive Nesuhi Ertegun hated it enough to want to drop the pinaist from the label, but Ian Carr notes that the album served as a model for what he views as a more successful, later effort, the 1985 album Spirits.

Avakian organized a lengthy tour of Europe for Jarrett's trio in 1969, and during it Jarrett gave one of his first in-depth interviews, to French jazz journalist Francois Postif. He expressed intense feelings of artistic solitude and resentment of the poor reviews that Restoration Ruin had received, and discussed the government harassment that he and his brothers had endured as a result of their conscientious-objector stance against the Vietnam War. He also elaborated on the difference between his private and performing self: "I'm very demonstrative when I play. I always make faces, laugh, jump about, gesticulate, and am very animated, and many people who see me like that think that I'm much more reserved when I've left my piano. In reality, I feel truly at ease only in music."

"You Know Why I Don't Play Ballads Anymore?"

In the 1969 interview with Postif Jarrett was also asked what three LPs he would take with him to a desert island, and his first response was, "Anything by Scott Joplin." He also mentioned that he was listening to the Beatles' most recent album. It was a time of great upheaval in jazz, with younger musicians like Jarrett as inclined to be influenced by the late 1960s psychedelic rock and funk, and also taking note of the avant-garde movement in their own stylistic world.

There was an older artist paying attention to these trends as well: trumpeter Miles Davis. Jarrett's former compatriot in the Charles Lloyd quartet, Jack DeJohnette, was already working with Davis when Jarrett joined as a second keyboardist in 1970, playing alongside Chick Corea, usually on an electric piano--not an instrument favored by Jarrett, but one wanted by Davis and also necessary in the loud mix of music that he was now producing. Jarrett said that Davis would say only a few things to him and the other members of the band, but that they were always quite meaningful, such as the time that Davis told him, "You know why I don't play ballads anymore? Because I loved playing ballads so much." For Jarrett, it was a sign not to let himself get into too much of a comfort zone as an artist.

The Road To ECM

In the early 1970s Jarrett forged a recording relationship with the ECM label that would have a profound impact on his career. He would record his first solo piano album, Facing You, for the label in 1971, and several years later his Koln Concert album, done in a similar context, would follow, going on to become one of the top-selling jazz albums of all time. Jarrett would at times be perceived as a somewhat contentious figure, as demanding of audiences as he was of himself as an artist, and not afraid to stir up the jazz world with strong opinions about his colleagues and the music scene in general. He would also form two significant quartets in the 1970s, the subject of a future Night Lights show. We end with "Birth," a track that points to the first quartet, the so-called American Quartet, and something from Expectations, Jarrett's brief, one-album outing on the Columbia label: "There Is A Road (God's River").

Many of the recordings heard on this show are also available on the 2-CD Keith Jarrett anthology Foundations.