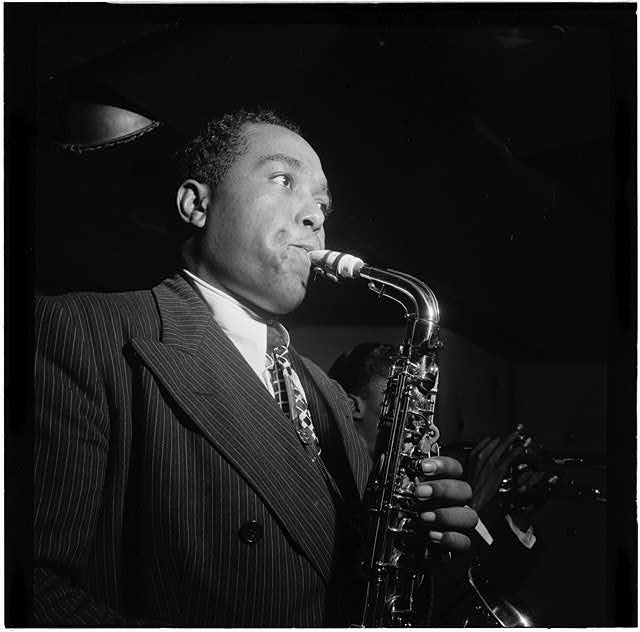 When Charlie Parker died unexpectedly on March 12, 1955, at the age of 34, the jazz world was devastated. Almost immediately, "Bird Lives!" graffiti began to appear around New York City, while musicians paid tribute, through live performances of his music, to the man who had done so much to revolutionize jazz.

Phil Woods, J.J. Johnson, Howard McGhee, and Dexter Gordon were just a few of the colleagues and proteges who would honor Parker's musical legacy through memorial concerts in the years following his death. This Night Lights program focuses on their interpretations of Parker's own compositions, taken from shows that were released on LP.

What He Had To Do

Parker's been gone for more than half a century now, and the beginning of his explosive influence goes back even further, so it may be hard for present-day listeners to grasp the intensity of the impact he had. Gary Giddins writes,

Established players satisfied with approved jazz styles encountered not only new levels of harmony, melody and rhythm in Parker's workâ€¦ but an iconoclastic sensibility that threatened to undermine generally accepted standards of excellence. Younger players were more open to the shock of recognition that, to paraphrase Melville, binds not only the community of genius but that of apprentice artists impatient to express their own powers in a world paralyzed with orthodoxy.

Giddins also quotes numerous younger players who were hearing Parker for the first time. "When I heard him play I nearly fell out the window," said trumpeter Red Rodney, for example. "Oh my God! Everything came together at one time. I knew then. I knew where it was and who it was and what I had to do."

Alto saxophonist Phil Woods was a student of the charismatic progressive-jazz pianist Lennie Tristano, but like so many other musicians coming up in the years after World War II, he idolized Charlie Parker. Woods was only 15 when he and a friend met Parker for the first time. As he recalled later, Parker was sitting on the floor of the club's backstage area with a cherry pie. "Hi, kids!" he said. "Would you like a piece of cherry pie?" "Oh, Mr. Parker," Woods replied. "Cherry is my favorite flavor."

Woods would receive more than cherry pie from Charlie Parker: He would build on Parker's inspiration to eventually forge his own sound. Early on, Woods was one of the first saxophonists to be touted as "the new Bird." The Parker connection became even more personal when Woods ended up marrying Parker's widow, Chan.

From a 1957 Parker memorial concert at the Five Spot in New York City, we'll hear Woods performing "Scrapple From the Apple."

In 1964, several of Charlie Parker's musical comrades came together at the Newport Jazz Festival to pay tribute to the saxophonist. Trumpeter Howard McGhee had worked and recorded with Parker in California in the mid-1940s, when the two of them forged one of the West Coast's most significant early bebop combos: It's McGhee you'll hear on seminal Parker records of that period such as "Relaxin' at Camarillo" and "Loverman." Both Parker's wife and Parker producer Ross Russell would cite McGhee as a positive and steadying influence on Parker.

The first to translate the language of bebop for trombone, J.J. Johnson recorded and played with Parker as well.

Drummer Max Roach was another Parker cohort from the late 1940s New York City scene; at Newport he imparted some wisdom that he had learned from Parker: "One's instrument should be like your arm or leg. It should be so much a part of you that you should be unaware that you're playing it."

Finally, saxophonist Sonny Stitt had been cited as a Bird apostle ever since the early 1940s, when he and Parker met for the first time. The two found that their playing styles were similar; shortly before Parker died in 1955, he ran into Stitt and said, "Man, I'm handing you the keys to the kingdom." Understandably resistant, though, Stitt would later tell an interviewer, "I'm not the new Bird. No one's Bird. Bird DIED."

Despite his reluctance to fill Bird's shoes, Stitt joined Parker's other peers at Newport in 1964 for the tribute set to the late saxophonist. We'll hear them jamming on a riff tune that Parker had created and recorded for Savoy in 1947, called "Buzzy."

Chicago was a city dedicated to musical remembrances of Charlie Parker. In large part, this was because of jazz impresario Joe Segal, who for many years held an annual memorial concert for Parker â€“ initially around the anniversary of his death in March, and later in August, around the time of Parker's birthday.

Segal had gotten to know Parker through several gigs Parker played in Chicago in the late 1940s and early '50s. In 1965, Segal recalled Parker making good on a promise to show up and play for a jazz club meeting at Roosevelt College in 1953. Segal's lookout man dashed from the school's entrance to tell the assembled students, "He's here!" Segal wrote,

As one, the audience turned in the seats towards the door. When Bird walked in, the applause and shouts were so thunderous that students passing by looked in to see what was happening. Almost magically the hall filled with wide-eyed students as the study halls, cafeteria, and library emptied.

Several of Segal's memorial concerts for Parker were recorded and released, including one 1962 date at a club appropriately called "Birdhouse." The group featured some of Chicago's finest scene musicians, led by saxophonist and trumpeter Ira Sullivan. Decades later, Sullivan recalled the week he played with Parker:

He was drunk the first night and it took six of us to lift him into the cab. After the second day, he said, â€˜Ira, I can't get drunk.' That was because the doctors had shot him with B-12. I had a beautiful, alert wonderful Charlie Parker the rest of the week. He was healthy and bright eyed and bushytailed. We had a wonderful week together. He treated me like the greatest trumpet player he had ever played with. A month later, he died.

In August of 1970, Segal brought together an amazing array of artists to pay tribute to Parker with a series of concerts over a four-week period. The musicians included saxophonists Lee Konitz and Dexter Gordon, trumpeters Kenny Dorham and Howard McGhee, and drummer Philly Joe Jones. Some of Chicago's finest hometown musicians performed as well. We'll hear from both McGhee and from Gordon, playing with Parker's former musical running mate, trumpeter Red Rodney.

A double-LP set of the concerts came out the following year. In its closing notes, Joe Segal wrote,

I believe sincerely that all of the hundreds of devotees who attended these concerts will never forget them. The musicians who played them most certainly will never forget, for they were truly inspired by the memory and music of Charlie Parker. That he still lives is a foregone conclusion. For, wherever his music is played-and that's just about everywhere-his original concept shines through.