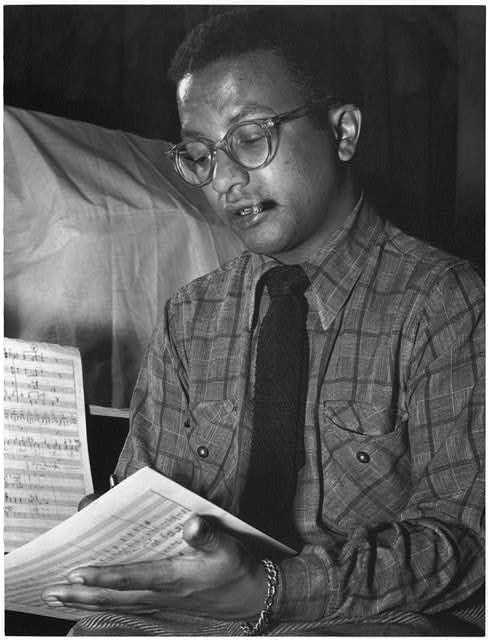 Billy Strayhorn spent much of his professional life in the shadow of his boss and writing partner Duke Ellington. While historians continue to debate the complexities of that relationship, there's no doubt that Strayhorn's work forms a significant part of the Ellington canon-and that it stands alone in its own right and style. "All of his tunes," Ellington trombonist Lawrence Brown said, "have a deep feeling behind them. You hear him in his music, which to me is the mark of a real musician."

Strayhorn was born in Dayton, Ohio on November 29, 1915 and grew up in Pittsburgh; he demonstrated his considerable music talent early on and was composing prolifically by his teens. Through a friend of a friend he was introduced to Duke Ellington in late 1938, and Ellington was so impressed with the young songwriter's talent that he literally took him in, eventually putting him up in his New York City apartment.

For the next 27 years Strayhorn would be a crucial partner in Ellington's music-writing efforts, composing "Take the A Train," "Chelsea Bridge," "A Flower Is a Lovesome Thing," "Raincheck," "Lotus Blossom," "Day Dream" and many more pieces. He also collaborated with Ellington on some of his important extended works such as Such Sweet Thunder, A Drum Is a Woman, and The Far East Suite. As Strayhorn scholar Walter van de Leur has noted, Strayhorn

created a separate musical entity within the realm of Ellingtonia, employing an original and sophisticated musical vocabulary that drew from a different harmonic, rhythmic, and melodic source....His sound is built on formal balance, an advanced harmonic language, and an economic use of musical material.

There's a sort of yearning spirit that informs all of Strayhorn's work-a lyricism that draws on loneliness, a love for life, and a sense of beauty lingering around the edges of the world. After he passed away in 1967, Ellington said of him, "Because he had a rare sensitivity and applied himself to his gifts, Billy Strayhorn successfully married melody, words and harmony, equating the fitting with happiness."

Strayhorn On the Show

Strayhorn By the Book

Here's a post that I wrote for NPR's A Blog Supreme: Something To Listen For: Billy Strayhorn In Five Songs

Duke Ellington on Billy Strayhorn (starting about 38:00 into the documentary, with footage from Strayhorn's memorial service):

Watch Ellington in 1965 introducing Strayhorn as he comes out to take the piano chair on "Take the A Train":