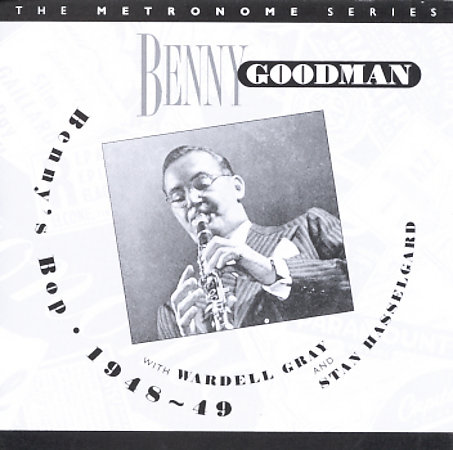 The 'King Of Swing' And His Irresistible Bop

This week marks the centennial of clarinetist Benny Goodman, who was born on May 30, 1909. We'll pay tribute to him on Night Lights with a program devoted to the so-called 'King of Swing''s foray into the revolutionary sounds of bebop in the late 1940s.

Fast, rhythmically and harmonically complex, and more difficult to dance to, bebop left many swing-era bandleaders surly and resistant in an already difficult postwar economic climate. Goodman was no exception; initially, he called the new style "pretentious." In fact, by 1947 he'd broken up his big band, signed with a new label (Capitol) and announced his intention to pursue classical-music projects. Yet within months he'd find himself playing jazz in bop settings.

Drawing on live broadcasts, V-discs, and a handful of studio sides done before and after the 1948 recording ban, the Night Lights show Benny Goodman's Bebop Interlude captures the clarinetist side by side with up-and-coming modernists such as

A Change Of Tune

For awhile Goodman became a connoisseur of the new music. He hung out at the Royal Roost in New York City. He was quoted in Downbeat as saying, "Changed my opinion? Well, yes, I suppose I have really. I think the important thing about bop is that it's bringing something new to jazz melodically." Goodman's flirtation with bebop didn't last long, but it remains a fascinating chapter in his lengthy career.

Here's Goodman pianist Buddy Greco on Goodman's relationship with bop and those who played it:

Benny respected boppers like Fats Navarro as the musicians they were, but I don't believe he understood bop or ever really liked it. I know he didn't like it. He had a habit of putting us on a little bit, making musical fun of what we were doing. Sometimes he did try to stretch out and play more modern, but he was so good at what he did that when he soloed on the new charts in his usual style, to my way of thinking he fit in just fine. It would have been a shame for him to change.

Greco goes on to talk about on Goodman's Capitol period, which was undermined by a try-to-please-everybody mishmash of material and helped lead to the clarinetist's abandonment of bop:

I think he did have a lot of uncertainty and confusion about the band's direction. When we started recording, one day we would do Chico O'Farrill's 'Undercurrent Blues' and another day do 'That Wonderful Girl of Mine,' which is an old Yiddish song. The records were such a mixture I don't believe they did very well. If you don't have a fix on what you're doing, people don't know what to expect. That's probably one reason why the writers came down so hard on him.

Watch Benny Goodman play "Stealin' Apples," from the 1947 movie A Song Is Born: