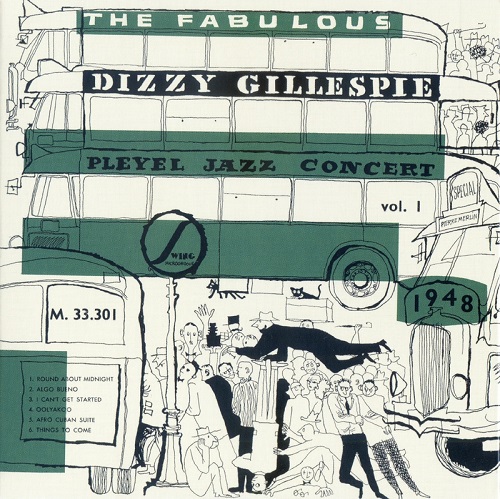 In the late 1940s American bebop landed on the European continent with an explosive impact, galvanizing young musicians and listeners and setting off a ferocious conflict between critics in France, as a new jazz culture took hold in the aftermath of World War II. On this edition of Night Lights we'll hear live recordings and some studio sides as well made by Charlie Parker, Dizzy Gillespie, Miles Davis, Howard McGhee, Kenny Clarke, and others, with European musicians sometimes sitting in.

In the late 1940s Europe was still emerging from the devastation of the Second World War, but it was also entering a period of great cultural vitality. Existentialism and leftwing politics dominated philosophical discussions, and French new wave cinema was just a few years away. There was also a keen and growing interest in American films, literature, and music-especially jazz, which had already made inroads before World War II, and which had already given rise to one homegrown European jazz star, guitarist Django Reinhardt. And American jazz itself was in a state of revolutionary upheaval after the rise of bebop, with musicians such as Charlie Parker and Dizzy Gillespie propelling the music into new realms of speed and harmonic dexterity.

The seeds of bebop in Europe had already been planted in part through a package of 78s received in 1946 by Charles Delaunay, co-founder of the magazine Le Jazz Hot and former member of the French Resistance. And saxophonist Don Byas, one of the first American musicians to settle into an expatriate existence in postwar France, had made some bebop-influenced recordings that involved European musicians as well:

But bebop really broke big in Europe at the beginning of 1948, when first bassist Chubby Jackson and then Dizzy Gillespie took groups to Sweden and France. Jackson, who had done time with Woody Herman's modernistic big band, brought along young musicians like trumpeter Conte Candoli and pianist Lou Levy as part of what he called his "Fifth Dimension Jazz Group." "We have been treated like royalty," he wrote of the visit in Metronome Magazine:

I visited clubs, dance halls, and met most of Sweden's top musicians. Younger or old, all wanted to learn the secret of playing bebop! They dig Charlie Parker and Dizzy back! Such interest in bebop I have never seen in America. They face it exactly for what it is-a new phase of jazz.

Trumpeter Dizzy Gillespie also played in Sweden, less than two months after Chubby Jackson made his debut there. After surviving a harrowing ocean trip and dealing with an unscrupulous promoter, the Gillespie orchestra took first Sweden and then France by storm, touching off a particularly rapturous reaction in Paris. French writer Boris Vian proclaimed that "Bebop, the most recent evolution in the history of jazz, has conquered Paris. Thanks to Dizzy Gillespie."

The enthusiastic reception accorded Gillespie's orchestra did not include prominent French jazz critic Hugues Panassie, who by one account left the concert fulminating that "I love jazz, but that's not jazz!" Pannassie oversaw the Hot Clubs of France, which underwent a convulsive schism between those favoring so-called traditional jazz and those in favor of bebop, with the traditionalists in the HCF at one point calling for a "general liquidation of doubtful elements," in terms that sounded reminiscent of a Stalinist purge. No one could accuse the French of not taking jazz seriously enough! The conflict is chronicled in Tom

Two more young American bebop musicians who made the European scene in the late 1940s included saxophonist James Moody, whose recording of "I'm In The Mood For Love" with a group of Swedish musicians gave the fledgling Prestige label its first hit and led to vocalist King Pleasure's "Moody's Mood For Love" reinterpretation. McGhee brought his sextet to France in 1948 and participated in a "New Orleans Vs. Bebop" contest that was refereed by Boris Vian. McGhee's group was then asked by Eddie and Nicole Barclay to record for their fledgling Blue Star label:

One of the key figures in this period and beyond was drummer Kenny Clarke, who had come to Europe with Dizzy Gillespie's big band and stayed behind, becoming an integral part of the modern jazz scene in Europe, eventually forming the Three Bosses with bassist Pierre Michelot and pianist Bud Powell, and co-leading one of the most exciting orchestras of the 1960s and 70s, the Clarke-Boland Big Band. We'll hear another drummer in this set who figured prominently in the evolution of bebop-Max Roach, who landed in France in 1949 as a member of Charlie Parker's group and took that group, minus Parker, into the studio to make a recording with James Moody for Charles Delaunay's Disques Vogue label. First, Kenny Clarke with Hubert Fol and his Bebop Minstrels performing a tune with a title called "Assy Panassy" that's surely invoking French jazz critic and noted anti-bopper Hugue Panassie:

In May 1949 another signal moment occurred for bebop in Europe with the Paris jazz festival, which played host to a slew of bebop talents from America, including pianist Tadd Dameron and the young trumpeter Miles Davis. The trip was monumental in several respects for Davis, who met Jean-Paul Sartre and Pablo Picasso and fell in love with a young actress, Juliette Greco. Decades later he looked back nostalgically on his time in France in his autobiography:

It changed the way I looked at things forever. I loved being in Paris and loved the way I was treated. Paris was where I understood that all white people were not the same; that some weren't prejudiced.

The music that his and Dameron's quintet performed went over big with their Parisian audience, and in this live recording we'll hear Davis himself introducing a number-a rare instance of his speaking voice before the 1950s throat operation that gave him his famous raspy tone-as well as a rather excited French radio announcer:

Davis' recent boss and king of the beboppers, Charlie Parker, was in Paris for that festival as well. Parker would return to Europe the following year and record with some Swedish musicians such as trumpeter Rolf Ericson, who impressed him with their improving fluidity in the language of bop. In years to come more American jazz artists, including Thelonious Monk, Clifford Brown, Chet Baker, and Gerry Mulligan also would travel to Europe, which by then had developed its own generation of talented, bebop-oriented musicians. But Parker's May 1949 arrival in Paris was the culmination of what Chubby Jackson and Dizzy Gillespie had begun nearly a year and a half before: the conquest of Europe by bebop. British pianist Marian McPartland, reviewing Parker's French concerts for DownBeat, wrote that

The band had a tremendous beat, and Parker, displaying his prodigious technique and originality of ideas, wove in and out of the rhythmic patterns laid down by Max Roach to the accompaniment of ecstatic cries of â€˜Formidable!' from the fanatics.

Special thanks to Tom Perchard and Michael McGerr.