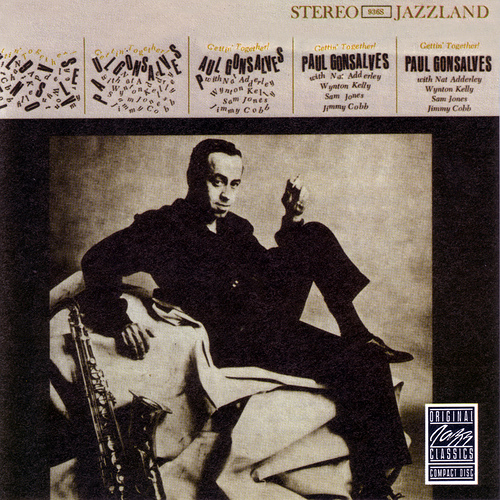 If it were a film, it might be called "Six Minutes Over Newport": The story of Duke Ellington tenor saxophonist Paul Gonsalves' solo bombing run that dropped 27 choruses on a disbelieving and increasingly rapturous audience at the 1956 Newport Jazz Festival. Afterward, Ellington would often say that he had been "born again" that night.

Gonsalves' extended musical moment enshrined him in the annals of jazz history so completely that the fine small-group recordings he made outside of the Ellington orchestra in the late 1950s and early '60s have fallen by the critical wayside.

Joined by top-drawer musicians such as Wynton Kelly, Sonny Stitt, and Kenny Burrell, Gonsalves not only demonstrated his ability to flourish in a hardbop setting, but he also got numerous opportunities to showcase his way with a ballad. Consider this chapter in the Paul Gonsalves story "The Other Side of Newport, Or: Off the A-Train."

Paul Gonsalves was born July 12, 1920 and grew up in New Bedford, Massachusetts. His parents came from Cape Verde; Gonsalves‘ first instrument was the guitar on which he learned to play Portugese folk songs with his brothers.

When he heard a DJ playing a Duke Ellington theme on the radio, Gonsalves became interested in jazz. The saxophone playing of Coleman Hawkins inspired him further. By the time he graduated high school, Gonsalves gave up the chance to get a commercial-art scholarship at the Rhode Island School of Design, choosing to pursue a career in music instead.

After a stint with the U. S. Army during World War II, in the waning years of the 1940s Gonsalves played with both Count Basie and Dizzy Gillespie‘s big bands. In 1950, he made the career move of his life, joining Duke Ellington‘s orchestra. Years later, Gonsalves said,

I woke up one morning with just $7.20 in the world. I couldn‘t sleep and all through that day something kept telling me to get up, and get dressed, and go to Birdland.

He went down to the New York City jazz hotspot around 11 that night, had a few drinks, and ended up introducing himself to Ellington, who said, "Hey sweetie, I‘ve been looking for you. Why don‘t you come down to the office tomorrow?"

It was the beginning of a beautiful friendship.

Even away from the Ellington orchestra A-Train, Gonsalves often recorded with Ellingtonian colleagues, such as Johnny Hodges and Clark Terry, doing Ellington material. Duke Ellington loved Paul Gonsalves – and not just because of Gonsalves‘ moment at Newport. In his memoir Music Is My Mistress, Duke wrote of Paul,

He has good musical education, has great solo taste, and plays with profound authority. He wants to be liked by everybody, and doesn‘t want anything from anybody except a kind word and a water chase. He will stand around and talk and socialize with people all night, whether he knows them or not, and always he says, ‘They‘re some beautiful cats, man.'

As audiences began to expect Gonsalves to play endless flag-waving chorus after chorus at some point each night, in some ways the triumph at Newport became a musical set of chains for Gonsalves. Nonetheless he found himself at home in the Ellington world; he stayed there for the last 24 years of his life. It was inevitable that some of his small-group dates would be satellites that revolved around that planet.

While alive, Gonsalves tended to be underrated or even knocked by critics. In 1963 one Downbeat reviewer called him "a disorganized Illinois Jacquet playing a leaky saxophone," and rapped him for "frequent lapses into faulty intonation and sloppy phrase-making."

Posthumous consideration has been kinder. In a 1985 Gary Giddins wrote,

Gonsalves‘ music probably seemed too effortless for his own good. He didn‘t do knee-bends or look pained while he played, and he could produce a marathon solo with a near-marathon cadenza at the drop of anybody‘s downbeat. Though his style had its obvious influences -- chiefly Ben Webster and Webster‘s mentor, Johnny Hodges -- he didn‘t sound like anyone else. Whereas Webster was elliptical and gruff, Gonsalves was all liquid rhapsody. The notes poured forth in cascades; somewhere in the mist, the melody invariably renewed itself.

The Importance Of Art

Freedom and the a of possibility were a large part of what drew Gonsalves to jazz in the first place. Those possibilities extended beyond the music itself. "The importance of art is the way it affects practical things," he said once, adding:

We don‘t have the money to buy a Picasso, but his work can affect the lines of, say, a lamp. Lines are derived from those paintings and you can see beauty in things now that you couldn‘t ten years ago. Maybe that explains why I liked jazz so much. There was a freedom in it and I could interpet my own ideas.