He, Too, Was America: Duke Ellington's Sepia Panorama 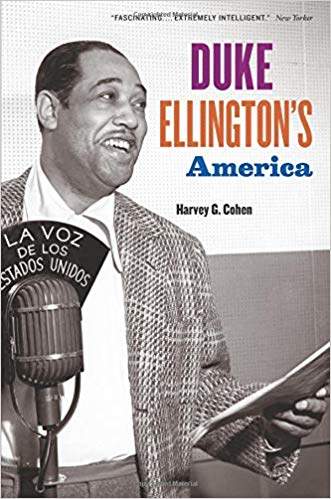 When it comes to biography, the life of pianist, composer and bandleader Duke Ellington has presented a challenge worthy of its maestro's motto: "beyond category."

Ellington was born in 1899 and died in 1974; in between, he merely led a world-class jazz orchestra for 50 years, wrote or co-wrote thousands of pieces, and became one of the most significant artists the United States has ever produced- forget any mitigating prefixes such as "jazz" or "African-American." Yet those qualities defined much of what Ellington did and who he was, as he moved through a long stretch of American history in which both jazz and civil rights were at the forefront of the country's cultural consciousness.

Given the scope of Ellington's story, it's not a surprise that no single book has emerged as the 'definitive' work about its subject.

Mark Tucker's Ellington: the Early Years offers the most in-depth portrait of a particular period, while John Hasse's Beyond Category: the Life and Genius of Duke Ellington provides a serviceable overview of Ellington's entire career; the oral-history Reminiscing in Tempo and the anthology The Duke Ellington Reader (edited by Tucker) make for quasi-comprehensive narratives as well. Harvey Cohen's new book, Duke Ellington's America, is not a definitive biography either, but it may well be the definitive book about the role of race in Ellington's life and music.

"No black American before Ellington had ever enjoyed such a lengthy career, or been so widely hailed as a major serious artistic figure," Cohen writes. He identifies a primary aesthetic challenge that Ellington and other African-American artists faced:

How do black artists write about the history, character, and problems connected with race and create great art and understanding without it devolving into polemic? And how do such minority artists develop a large enough audience to support their art, while staying true to their ideals?... Ellington accomplished this feat over his long career by creatively celebrating the black American experience without standing on a soapbox.

The Goals of a Leader

Ellington was a bandleader and composer who was deeply driven to create music. As Cohen's book makes clear, music was his most profound pleasure and reward. He was an ambitious visionary, seductive in his pursuit of his goals, a sophisticated entertainer who told his audiences "we love you madly." Embedded in those goals were his concern with racial identity and a propensity for an adroit kind of politics, germane to the success of a highly talented black man in early-to-mid-20th century America.

Such topics can create disagreement and unease in the jazz world even today, but those who shy away from jazz books with any sort of cultural-studies approach should not avoid Duke Ellington's America, which is thankfully jargon-free. It is, however, a scholarly and accessible social history that documents its subject's emergence as a so-called "race leader" in the 1930s, as an artist who did not shy away from what some might term an 'agenda.'

It's perhaps easy today to take for granted what Ellington achieved in the early decades of his career, but contemporary listeners should keep in mind the context of his work. He wrote and recorded extended works like "Creole Rhapsody," "Symphony in Black," and "New World a-Comin'," that signaled the seriousness of his intent as a composer and a presenter of black cultural heritage during a time when African-Americans were still being lynched in the South. And he offered shorter pieces as well, like "Sepia Panorama" and "Harlem Airshaft," which evoked the day-to-day life of urban black America. At the same time, Ellington was charging through the big-band era, leading one of the most popular orchestras in the nation and writing hits that would generate royalty income to subsidize his band for years to come. His success supplied him with an ideal vehicle for satisfying both his creative drive and his desire to practice his own brand of racial politics.

In his 1941 Lincoln Day speech, "We, Too, Sing America," Ellington laid out his credo:

I contend that the Negro is the creative voice of America, is creative America, and it was a happy day in America when the first unhappy slave was landed on its shores.

As Cohen notes, "He would present an unclouded image of black pride, beauty and artistry decades before it became fashionable in the 1960s." Such qualities were one reason why author Ralph Ellison, looking back on his experiences as a teenager seeing Ellington's orchestra in the 1930s, called the band "news from the great wide world." The news, for all of Ellington's professional career, was tumultuous, as America moved slowly and painfully towards legal equality for all of its citizens.

There is much to chronicle here, from Ellington's early days at the Cotton Club (a venue that barred black patrons and encouraged exoticized, stereotypical representations of African-Americans in its programming) and his pioneering 1941 "social-significance" musical Jump for Joy, to the uproar over his reported remark in 1951 that black Americans were not yet ready for integration and his 1963 civil-rights show My People.

Ellington toured the South and foiled its segregated ways by ferrying his orchestra around in their own, private, Pullman railroad cars. He wrote programmatic music that paid tribute to black achievement, figures, and centers of autonomy such as Harlem and Liberia, even as he endured criticism that he was not doing enough to aid the cause of black liberation. "Ellington existed on the front lines of a racist society," Cohen writes, "moving against its strictures in his own way, openly celebrating and documenting black culture and history. His activism was cultural, artistic, and significant, but it was not overtly political... Ellington's approach was infiltration and circumvention, not confrontation."

That is the central message of Cohen's book, and he sounds it repeatedly, through a wealth of well-researched details, stories, and quotes from Ellington himself. Ellington was a complex personality, no less when it came to matters of race. In 1939 he wrote in Downbeat, "Our music is always intended to be definitely and purely racial." In 1971, he teed off on a Ukranian fan who complimented him for being "a successful Negro musician and composer," responding that "to say there is such a thing as Negro jazz is simply ignorant." He wished to help define the black experience in America, but as an artist he did not wish to be solely defined by that experience.

Cohen's book also provides several valuable, in-depth examinations of important chapters in the Ellington saga. He focuses on how the marketing efforts of Ellington's manager, Irving Mills, shaped Ellington's image as an artist, early in his career. He delves deeply into the little-known script that Ellington wrote for Black, Brown and Beige, the epic 1943 work that the composer subtitled "A Tone Parallel to the History of the Negro in America," and his account of Ellington's sacred-concert period in the 1960s is unprecedented in its breadth. He makes a case for Ellington as the musician whose work led the way in elevating jazz to the realm of art music (as opposed to the beboppers, who are usually given credit - or blamed - for said elevation). Finally, Cohen discusses at length the impact of technological changes and business practices, by Ellington and others, on Ellington's professional way of life.

Strangely, Duke Ellington's America does not include a chapter devoted to Billy Strayhorn, Ellington's co-muse and songwriting partner for a quarter of a century. The composer certainly figures in Cohen's telling of the Ellington story, but in a book with a thematic chronological structure, surely Strayhorn merits his own segment. His contribution to Ellington's artistic legacy was immense. (As Cohen observes, the 1953-55 period of Strayhorn's estrangement from the Ellington orchestra was one of Duke's weakest.)

With and without Strayhorn, one of the most amazing things about Ellington's career was his ability to sustain his creative vitality as a composer; he produced works of merit almost all the way up to the time of his death, and his late period (1966-73), featuring albums such as The New Orleans Suite and Afro-Eurasian Eclipse, remains underrated.

"He was the only Swing Era bandleader to treat jazz-oriented big band music as an ongoing artistic movement after World War II," Cohen writes. And In 1960, journalist Murray Kempton pointed out that there were only three important artists who had gotten their start in the 1920s and who continued to create: Ellington, the poet Robert Frost, and the novelist William Faulkner. "Faulkner and Frost were already years past their best work," notes Cohen, "while Ellington still had a decade of musical invention, and some of his best releases were yet to be crafted."

He kept going as a performer, too. To the end of his life Ellington was an out-and-out road dog, touring America and beyond. (His success in keeping a working orchestra together for five decades was another remarkable accomplishment.) His travels provided inspiration for his composing as well. Cohen quotes this passage from Richard O. Boyer's 1944 New Yorker profile of Ellington, "The Hot Bach":

Ellington looked out the window at a drab village through which the train was speeding. A woman stood on a porch, holding a tablecloth which she seemed about to flourish. Before she completed her motion, she was out of sight. "I'd like to write something about that," Duke said. "You know, people moving on a train, other people standing still, and you see them for just an instant and then you rush on forever. Sometimes you look right into their goddamn eyes. Seems for a minute like you know them. Then they're gone." He kept staring out the window.

In pieces such as Deep South Suite and Black, Brown and Beige, Ellington captured both the individuals he saw for a fleeting moment and the enormous backdrop of history through which they moved. "My music talks about the new people I keep meeting, the places I've seen, and the places I've seen change," he said in 1964. Ellington's art contained multitudes. It was an affirmation of the dignity of all people, told through the prism of a brilliant artist who for much of his life was denied that dignity, like so many other Americans, because of his race. In spite of this - because of this - he bequeathed to us a remarkable republic of song.