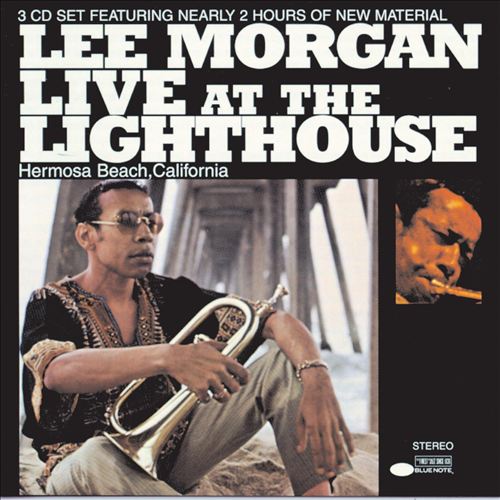 Throughout the 1950s Hermosa Beach's Lighthouse CafÃ© was a beacon for West Coast jazz in southern California, anchored by a legendary house band, the Lighthouse All-Stars. In the early 1960s, with the disbanding of that group, the CafÃ© became instead a destination for national jazz acts such as Art Blakey, Elvin Jones, Joe Henderson, Lee Morgan, and more. We'll hear music from some of those artists on this "After The All-Stars: Live At The Lighthouse, 1960-1972" edition of Night Lights.

It wasn't an actual lighthouse, but the Lighthouse CafÃ© in Hermosa Beach, California became a beacon of West Coast jazz in the 1950s, home to a revolving group of musicians known as the Lighthouse All-Stars, led by bassist Howard Rumsey, featuring artists such as Shorty Rogers, Bud Shank, and Shelly Manne, many of them alumni of the Stan Kenton Orchestra, who embodied the emerging sound of West Coast jazz, a genre much broader than how it's often been rated. The Lighthouse's sunny, on-the-water locale and loyal-but-laidback clientele, sometimes clad in swimwear, assured the Lighthouse All-Stars of steady work.

By the beginning of the 1960s, however, Rumsey was having a harder time finding new young talent to replace the All-Star veterans who had gone on to lead their own groups, and so he disbanded, becoming instead a concert promoter for the Lighthouse and bringing in national acts, many of them from the East Coast. The improving racial climate of the early 1960s also made it easier, according to Rumsey, to feature integrated or all-black bands; while the All-Stars had had their share of African-American members or guests over the years, the various incarnations had been primarily white.

Cannonball Adderley's quintet was one of the first east coast groups to play at the Lighthouse, in the autumn of 1960, followed in the years to come by artists such as Dizzy Gillespie, Ahmad Jamal, Oscar Peterson, and others whom you'll hear on this edition of Night Lights. The first set includes an unusual and short-lived edition of Art Blakey's Jazz Messengers, with a young Chuck Mangione on trumpet and Keith Jarrett on piano. First, a 1962 performance from a West Coast ensemble that serves as a sort of bridge between the Lighthouse's 1950s and 60s eras, with saxophonist Curtis Amy highlighting his vibraphonist Roy Ayers on "For Ayers Only":

In the mid-1960s the rock â€˜n roll impact of the British Invasion continued to reverberate throughout the jazz world, and it could be heard at times in the repertoire of jazz acts performing at the Lighthouse. The Jazz Crusaders recorded several albums at the Lighthouse, and on their 1968 edition they included a funky jazz brew transformation of the Beatles' "Eleanor Rigby" that helped drive the record's sales. Blue Note recording artists the Three Sounds also recorded at the club, and in the subsequent album's liner notes pianist Gene Harris enthusiastically proclaimed it

the best jazz club in the countryâ€¦ You're presented respectfully like you're playing on a concert stage.. like you're the star tonight, babyâ€¦ you can't do anything wrong! And you never lose the closeness of the audience there. The people are up tight and right next to youâ€¦ it feels like they're breathing down your throat digging every minute. The Lighthouse is beautiful, and I'm delighted we recorded there.

The album kicked off with the Three Sounds' own spin on a mid-1960s rock radio hit, the Yardbirds' "Still I'm Sad":

Saxophonist Joe Henderson and trumpeter Lee Morgan were among the advanced hardbop artists who recorded at the Lighthouse in its 1960s/early 70s era. Morgan's saxophonist Benny Maupin recalled the band's two-week gig at the Lighthouse in 1970 with pleasure, writing that "We all enjoyed the ocean, air, and the very relaxed atmosphere." Howard Rumsey, too, remembered that Morgan "lifted the band and the listeners every night with his free swinging, effortless, inspiring, personal, pixie-like style." We'll hear Morgan's rendition of the song that made him a jazz star in the 1960s, after this from live 1970 Lighthouse performance from Joe Henderson of a composition that featured Morgan on its first studio recording:

The Lighthouse continued featuring jazz into the first years of the 70s, but the death of owner John Levene in 1971 led to a parting of ways between Howard Rumsey and Levene's son Russ, who wanted to highlight blues performers instead. Rumsey began a new club in Redondo Beach called Concerts By The Sea. The Lighthouse is still open today, and it still presents jazz artists from time to time. Its place in jazz history has been boosted by Ted Gioia's West Coast Jazz book and a 2006 documentary, which both focus on the club's glory days of the 1950s. But the Lighthouse remained a vital venue for modern jazz beyond that, and we'll close the show with two of the last jazz albums to be recorded there, in 1972-drummer Elvin Jones' group, and guitarist Grant Green, heard here with "Walk In The Night":

Special thanks to Ted Gioia, Ken Poston, and the Organissimo jazz forum.