A Tribute To Dominic Spera 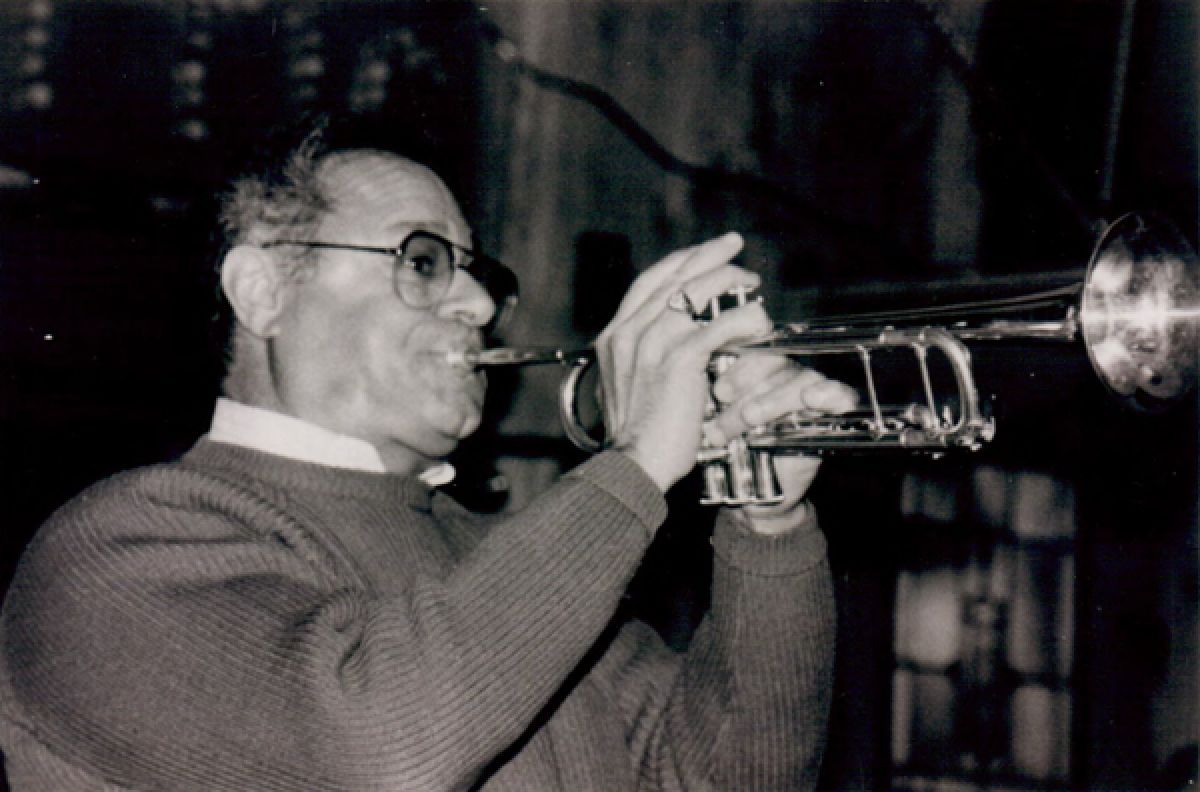 Spera's powerful, exuberant trumpet sound was a reflection of his personality.

Dominic Spera, a trumpeter, vocalist, and educator who played a key role in helping David Baker build up Indiana University's world-renowned jazz studies program, passed away in Fort Wayne, Indiana on October 23.  He was 89.

In the days following Spera's death, colleagues, former students, and friends shared memories of Spera on Facebook, recalling his entertaining classroom critiques ("Somebody opened up the windows and let all the swing out!"), his practical and highly effective instructional methods, and his positive impact on them as musicians and people.  IU jazz faculty member and trumpeter Pat Harbison, who moved into Spera's position (and his former office) after Spera retired from IU in 1997, wrote, "Every boy deserves a role model and mentor as kind and terrific as Dominic Spera. I was fortunate he was one of mine."

On Wednesday, October 27, IU jazz studies head Tom Walsh and singers Rachel Caswell and Janiece Jaffe joined me on WFIU's weekday afternoon jazz program Just You And Me to discuss Spera's life and legacy.  You can hear the program, which featured recordings by Spera as well, at the audio link at the top of this post.

Spera was born in Kenosha, Wisconsin on April 18, 1932 to Anita and Constanzo Spera, and grew up in the hinterlands of the Chicago area.  His father, Spera wrote in the liner notes to his 1995 Dominic Spera Big Band CD, "came to America at the age of 14 to work in the strip mines of Iron Mountain, Michigan.  He truly lived the American dream by becoming General Superintendent for American Motors and a thirty-second degree mason."

Spera's son Mark fills us in on why his father took up trumpet in the first place:  "He had severe buck teeth at a young age.  My dad used to say 'they were so bad he could eat a cob corn through a picket fence'.  Unfortunately, his parents couldn't afford braces, so the dentist suggested playing the trumpet to help push them back. And that's why he started playing."

Spera served on the IU Jacobs School of Music faculty from 1977 to 1997, but his path to that job took many interesting turns.  On the Just You And Me tribute show we hear him in 2010 recalling how he met David Baker and Al Cobine, another influential Indiana jazz figure, on the same day in 1955.  Interim Jacobs Dean Jeremy Allen writes in an email remembrance that "he earned his B.M., B.M.E., and M.M.E. degrees from the Jacobs School of Music, which he attended at intervals during the 1950s and 60s.  During those years, Spera also performed professionally in New York City in a variety of musical settings that included the Firestone and Fred Waring television shows, Roxy Theatre Orchestra, City Center Ballet Orchestra, and Radio City Symphony, plus the bands of Charlie Barnet, Billy Butterfield, and Tommy Dorsey.

Spera also played lead trumpet in several Broadway shows, including How to Succeed in Business Without Really Trying; The Roar Of the Greasepaint, the Smell of the Crowd; and Stop The World, I Want To Get Off.  From 1966 to 1974, he played first trumpet for Burt Bacharach, Henry Mancini, Johnny Mathis, Andy Williams, and other giants of the music business.

In 1968, Spera joined the faculty of the University of Wisconsin-Eau Claire, where he taught jazz and trumpet and started one of the largest and most prestigious jazz festivals in the country.  He remained there until 1976, returning to Bloomington in 1977 to take a position at Indiana University on the faculty of the music school.  During his years at IU, Spera taught jazz arranging and composition, jazz pedagogy, and the history of the big band.  He also led one of the two top jazz ensembles."

Spera's work as a soloist and clinician took him all over the United States and to other countries as well.  He performed with Frank Sinatra, Natalie Cole, and Steve Lawrence and Edye Gorme.  He wrote three books on music improvisation, participated in numerous summer jazz camps, and recorded with artists such as Al Cobine, Henry Mancini, Johnny Mathis, Eugene Rousseau, Barbra Streisand, and Fred Waring. He released two albums that featured his own music and arrangements, Make A Joyful Noise! (1980) and Dominic Spera Big Band (1995).  In his retirement years he spent some of his time in Florida, where he continued to play frequently in big-band settings.

Spera, survived by his wife Patty and sons Greg and Mark, was a military veteran whose tour of duty during the Korean War era proved significant in a personal way.  Longtime Spera friend and trumpet student Jim Sowinski writes, "He told me that when he was in the army at Fort Benjamin Harrison he was asked to direct a choir.  I think it was an employee choir, but it could have been a church.  Anyway, Patty was in the choir and they started dating."

On WFIU's station copy of Spera's 1995 big band CD, there is an inscription from Spera to longtime WFIU jazz DJ Joe Bourne that reads,"To Joe Bourne, a good friend and musician.  Keep swinging."  Music, friendship, education, and inspiration, with a lot of laughs and stories along the way--all lessons that Spera imparted from his ongoing school of swing, underpinned by a vital sense of wisdom, an unyielding committment to the importance of work, and a festive appreciation for the foibles of day-to-day experience in the jazz world and beyond. There are plans for a celebration of life event to be held for him next spring in Bloomington, where those attributes will undoubtedly be recalled at length; his joy and his knowledge touched the lives of so many who knew him.

Watch a performance by Dominic Spera as part of the 1997 "Jazz In July" concert series at Indiana University:

Hear Dominic Spera performing "The Walls Of Jericho" with the North Central Stage Band in 1974:

(Thanks to Jeremy Allen, Pat Harbison, Jim Sowinski, Mark Spera, Tom Walsh, and others who provided information for this web post.)