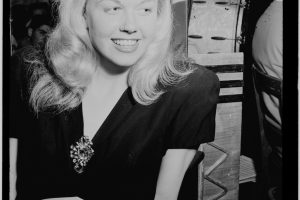 Doris Day 1922-2019: In addition toÂ Night Lights, I host a weekday afternoon jazz program on WFIU-Bloomington, IN calledÂ Just You And Me. I devoted the first 75 minutes of today's broadcast to Day's musical career, featuring recordings made with Les Brown's big band, Harry James, the Page Cavanaugh Trio, Paul Weston, Andre Previn, and more. (All drawn from CDs I have at homeâ€“I'm definitely a fan and have always felt that she was tremendously underrated as a singer.) The program concludes with a tribute from my friend Chris Young, who met Day seven years ago during a party at the Doris Day Animal Foundation. You can listen to it at the link above and view the playlistÂ hereÂ (the web version of the program includes some extra Doris Day tracks at the beginning that do not appear on the playlist).