Here's how Bloomington is changing the way it prioritizes sidewalk projects 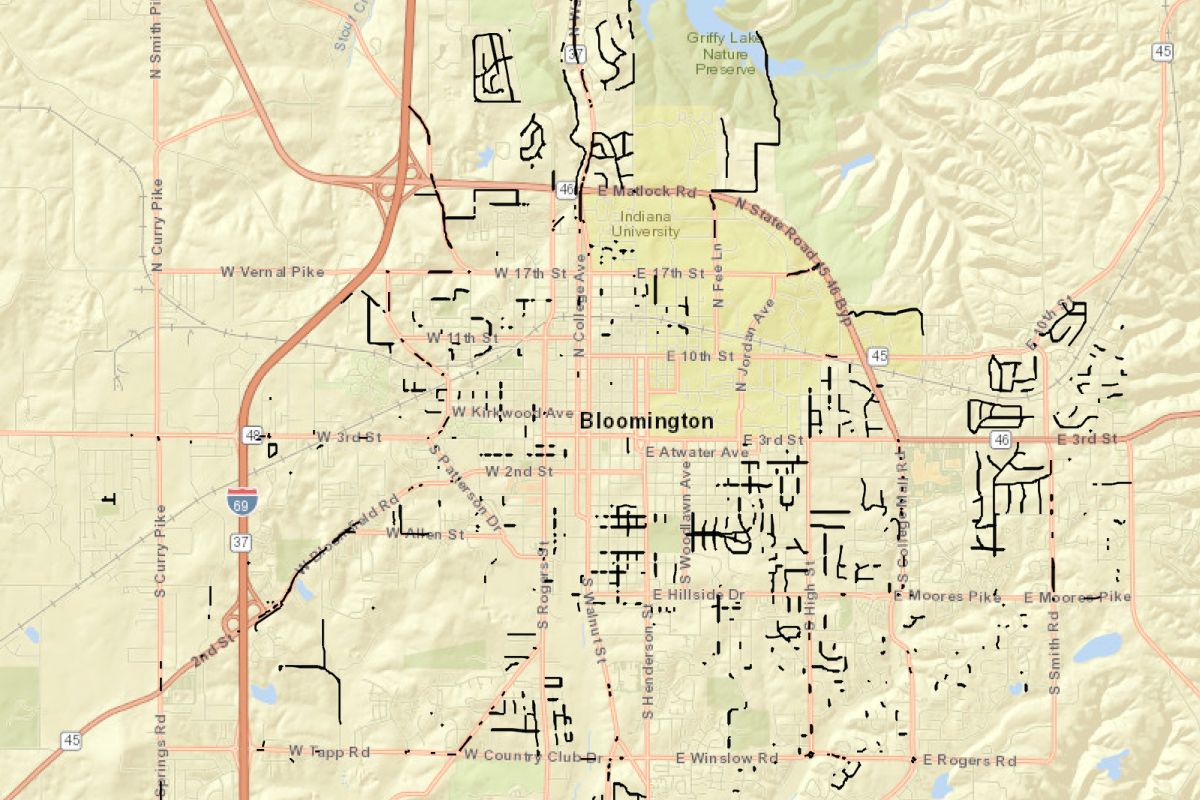 Screenshot of the missing sidewalk network as reported in the city's sidewalk equity improvement report. The black lines represent gaps in the existing network. (Courtesy: City of Bloomington/Mark Stosberg)

It has been said simply looking to the ground can reveal the extent to which cities value inclusive and accessible transportation. That is why Bloomington city planners hope to change the way the community prioritizes sidewalk construction projects.

“We have extremely long sections of roads, or roads that see a lot of traffic- see a lot of high-speed traffic- that are missing [sidewalks] in these areas that are low income, low access and have a high number of people without access to a car,” said Bloomington bicycle and pedestrian coordinator Mallory Rickbeil.

“Our goal with this project is to open up the resources and the information that is the roadmap for how we make recommendations for new sidewalk construction,” Rickbeil said.

Instead of using only a request-based system to log improvement projects, the report suggests the city should prioritize all projects based on 10 different data lenses - like walking potential, population density, and transit to work score. This way, the city can prioritize projects that might have been pushed to the bottom of the current list.

“We know that a request-based system has an inherent bias towards the people that have the time,” Rickbneil said. “People who have the social connection, have the education, have the perseverance to contact the right person at the city.”

She said the city would like to build sidewalks on all 234 miles of its streets but doing so is not feasible.

That is because one mile of new sidewalk can cost between $1.7 million and $2 million. Each project typically takes two years. The first year is dedicated to design and right of way acquisition, and the second year is construction.

However, there is an easy way to identify which parts of town are in the most need of new sidewalks.

A “desire path” is a space in the grass where you can see erosion because of foot traffic.

“And that is probably the best physical indicator that we can see that there is an intuitive path that pedestrians want to take but a pedestrian facility simply doesn't exist,” Rickbeil said.

She said the Increasing Transportation and Mobility Accessibility Opportunities for All meeting in June inspired her work on the report. The Council for Community Accessibility hosted the event at Switchyard Park, which grouped city planners, elected officials, and citizens of various physical abilities together for a walk on one of seven routes.

“It was very eye opening,” said Susan Seizer, professor of anthropology at Indiana University. “I loved that people really cared about like, is this comfortable for you? Is this wide enough for you? Is this bump bad? Because that never happens otherwise.”

Seizer attended the event as a community member in a wheelchair, and said she continued to learn about accessible infrastructure.

For example, a blind member of her group was one of her former students. While walking the planned route, Seizer said she realized the small red bumps on curb cuts help blind people know where to enter and exit sidewalks.

While Seizer said Bloomington has become more accessible over the last 16 years, she still faces issues in front of her home on East Ruby Lane.

Seizer said there are also issues with blocking existing sidewalks. She said snow piles are plowed into handicap parking spaces and essentially block her access to sidewalks in the winter.

“People like me who have a ramp van, we need those spots,” she said. “Because those blue striped spots are so that we can lower the ramp and get off the ramp and turn.”

Seizer said city planners should be conscience of leaving a 36-inch-wide path for all new and existing sidewalks. Things like street signs and bicycle racks can make the path too narrow for wheelchair users.

To best understand existing barriers for people with disabilities, the sidewalk equity report calls for focus groups and mapping exercises, among other things.