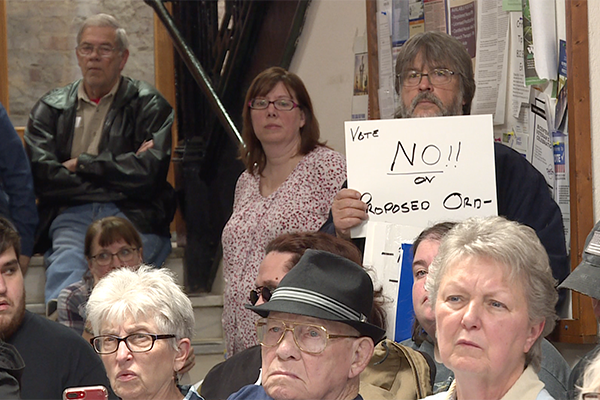 The Owen County Commissioners decided to table their proposed festival ordinance in an unexpected turn of events at Monday night’s meeting in Spencer.

This comes after Commissioners President Jeff Brothers said at their last meeting that he had planned to pass the controversial ordinance that could make it harder to hold special events or festivals on county property.

Residents from around Owen County packed the entire first floor of the courthouse to hear comments on the proposed ordinance.

County Attorney Jim Bryan began the meeting by attempting to quell some fears about the ordinance’s limits, saying the county does not have the legal authority to interfere with private events on private property.

“The ordinance for a special event can only be for county-owned property, Owen County property,” Bryan says. “There’s a thought – ‘Well, what if I have a garage sale? What if I’m having a wedding?’ – none of that applies.”

However, as the proposed ordinance is currently written, the county has the authority to “standardize the application, review, and approval procedures for Special Events to be held in Owen County, Indiana.” A Special Event, according to the ordinance, is “any organized gathering of people for any purpose for a limited period of time which is sponsored by a for-profit or non-profit individual, group, organization, or entity,” and can be considered so if it is “expected to have a visual, noise or other environmental impact upon the immediate vicinity or surrounding area of the event.”

After Bryan finished, those who had previously requested a spot on the agenda were given two minutes each to comment on the proposed ordinance.

The few who spoke in support of the ordinance said they felt it allowed the county to collect much-needed funds.

One of the pro-ordinance speakers, Barron Barnett, said he supported the proposal because he felt not doing so would be discriminatory.

“As a white Caucasian, as a Christian, and as a heterosexual male, I feel like I am being discriminated against and I am being harassed if you allow other groups, other people to flaunt their sexuality out there in public in front of my face,” Barron says. “Because I don’t do it to them and I don’t want them doing it to me.”

Barron’s statement was met with applause from some in the audience.

Yet most of the public comment was spent opposing the ordinance, with many residents describing how the proposal would affect their downtown businesses.

One businessowner was Denise Sudol, who owns The Dragonfly Gallery on the Spencer town square, across from the courthouse.

“I don’t want my courthouse used just for legal people and for convicts,” Sudol began.

“The first year that I came here and opened up for the Apple Butter Festival, my revenue that month was $12,854.89,” she says. “The year that they moved away and went to the fairgrounds, our revenue was $6,148.21. So whomever tells you we’ll get along just fine without the festivals, that’s just not true. I’ve got the numbers and I can show them to you. ”

Resident Barbara Thompson said Owen County’s festivals were actually the reason she decided to move to Gosport a little over a year ago.

“Seeing all the festivals on the calendar made me feel like there was an involved community and things to do for me, my family and friends,” Thompson says. “And that has proven true. I’ve been back to [Spencer] Pride last summer, and Apple Butter. I’ve brought my family here and we’ve shopped.”

Many residents also echoed each other’s concerns with the commissioners’ lack of transparency during the entire ordinance process. The whole ordinance debacle started after form letters surfaced describing the Spencer Pride Fest as overly sexual and inappropriate for children. The Owen County Commissioners had originally tried to pass them off as a petition from taxpayers complaining about festival costs.

“After the initial public outrage about this, there have been endless amounts of backpedaling and misinformation used in an attempt to support this plan,” says resident Casey Shivley. “Rather than making an effort to simply enforce the existing ordinance you [the commissioners] previously neglected, you have wasted months of county resources rewriting it to best suit the request of a handful of biased residents who have little direct knowledge of the festival they’re opposing. Since your statements in July, hundreds of citizens have organized and united across the county to specifically oppose this proposed ordinance and the obvious motivation behind it. From what I’ve seen, most feedback that has been offered has been specifically ignored.”

“What message do your divisive actions portray to our youth and others who may be considering relocating to Owen County, much like I did six years ago?” she continued. “Is it worth kicking Santa out of the courthouse to get drag queens off the lawn?”

“We have called twice for input from the citizens of Owen County. For us not to listen is wrong; we are listening. And to be called out and called names just because we’re trying to put this thing together for everyone – I take offense to.”

Brothers then moved to table the ordinance so the commissioners could go over some of the questions residents had and put together a new ordinance.

“I got one thing to say,” Williamson says. “I think we need to keep events on the square to bring business in and help the people of Owen County.”

Williamson’s statement received the biggest round of applause all night.

Now, it’s back to the drawing board for the commissioners. But Spencer Downtown Event Coalition spokesperson Jonathan Balash says he’ll celebrate when he sees the new ordinance.

“It’s not a loss for sure,” Balash says. “But I don’t know that we’d wanna claim victory yet. These commissioners have not demonstrated a great willingness to listen to the people. It does make me a little nervous to table it; I would’ve rather them voted on it and voted it down.”

There is no timetable set for the edited proposal. The Owen County Commissioners will next meet on Monday, Nov. 18 at 6 p.m.

Commissioner Gary Burton was not present at Monday's meeting.