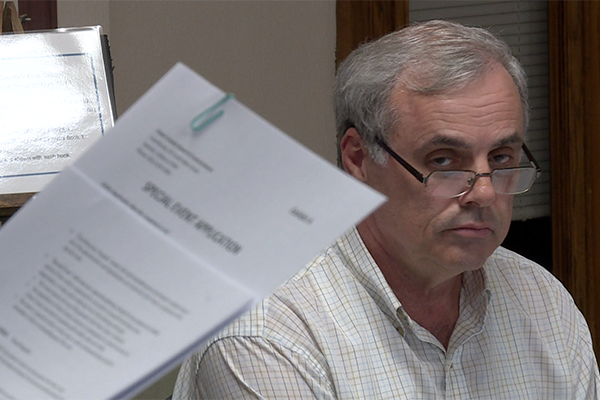 This came less than 12 hours after the Commissioners made the edited ordinance available to the public on Monday morning.

The new ordinance, which is now law, is essentially the original proposal – just with cleaner language that makes it less likely to be subject to litigation.

Over 30 people attended Monday night's meeting in what many thought would be the first reading of a revised festival ordinance that has been the cause of immense controversy in the county since August.

But after Owen County attorney Jim Bryan read the revised ordinance aloud for the first time, Commissioners President Jeff Brothers moved to vote on the issue without allowing the public to comment.

Commissioner Gary Burton shook his head no as Brothers explained that the Commissioners’ obligation to listen to the public had already been fulfilled when they held a public comment session on the original draft over a month ago.

“Jeff, this is irresponsible behavior,” resident Ronan Young said. “You’re not letting the people give input. You put this out to the people this morning. You’ve made some fantastic improvements, but it’s not where it needs to be to keep the people happy. You could be the good guys in this, instead of everybody thinking we’re a county full of jerks.”

“You’re taking us backwards,” he continued. “Listen to the people; listen to their input. Get everybody’s input and do something about it.”

“And you’re not going to let any of them speak,” Young responded.

As the back-and-forth between the Commissioners and public turned to shouting yet again, Brothers asked County Sherriff Sam Hobbs to clear the Owen County Courthouse “if we [the Commissioners] don’t get the respect that we’re required.”

Hobbs said he told Brothers he had to let the public know beforehand if he was not going to allow for public comment. The Commissioners made no such announcement.

The new ordinance addresses some concerns residents raised during the aforementioned public comment meeting on Nov. 4.

The new ordinance no longer gives the Commissioners say over any event anywhere in the county; it now says the Commissioners can only make decisions on special events that happen on the courthouse square. It also cleans up the language concerning fees and makes them more reasonable for a county like Owen.

But residents’ biggest concern was not addressed. The courthouse is still off limits for all special events, despite the fact Commissioner Steve Williamson previously said he wanted it open.

“It [the courthouse] is a public house – why can’t it still be used for that?” Young asked. “I think that you guys rushed this ordinance through, thinking you were going to get it through without pushback from the people. People started to push back, and you still just pushed and rushed it through without stopping. You create commissions for everything to get public input, but you wouldn’t do it on this one.”

The Commissioners also kept a section that now prohibits “sexually explicit materials” and nudity, something Spencer Pride President Jonathan Balash has said is an obvious nod to the Spencer Pride Fest.

Although the Commissioners said the new ordinance was part of a “routine recodification” of the county’s ordinances repeatedly at Monday’s meeting, they originally introduced the idea of a new festival ordinance as a response to what they described as a petition from county residents who were concerned about taxpayer costs. That “petition” turned out to be a form letter describing the Spencer Pride Fest as overly sexual and inappropriate for children.

Now that the Commissioners approved the ordinance, Balash says the Spencer Pride Fest will not be on the courthouse lawn for the first time in over a decade.

“We already have a fantastic plan to make a larger event than we’ve ever had,” Balash says. “An event that’s more engaging with our downtown organizations and businesses, an event that’s gonna be bigger and bolder than it’s ever been.”