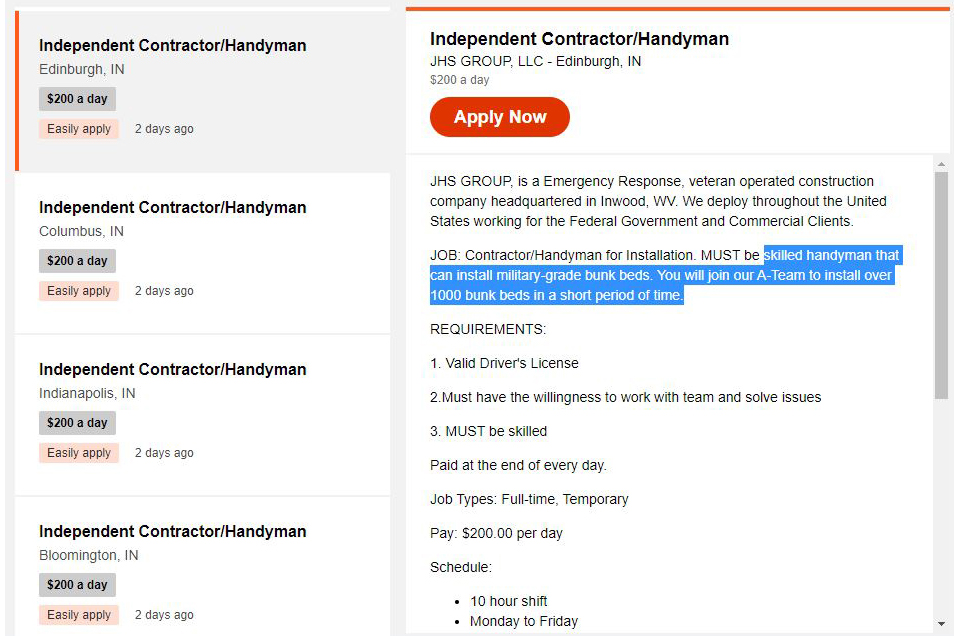 Job listings on Indeed.com the morning of Aug. 27 for an "independent contractor/handyman" to install bunk beds over a short period of time. The listing now says the construction will be a months-long project for a ranch in Southern Indiana. (JHS Group, LLC/Indeed)

A West Virginia-based military contractor has plans to build over 1,000 military-grade beds in Southern Indiana.

JHS Group, LLC had job listings online Friday morning looking for independent contractors or handymen to install “over 1,000 bunk beds in a short period of time.”

The listings were posted on Indeed.com three days ago with locations of Bloomington, Indianapolis, Columbus and Edinburgh. Edinburgh is four miles east of Camp Atterbury, which the Pentagon is considering to house Afghan refugees escaping the Taliban.

JHS Group advertises itself as an “emergency response, veteran operated construction company” that builds throughout the U.S. “for the Federal Government and Commercial Clients.”

When asked what the bunk beds would be used for, a spokesperson for JHS declined to provide specifics but said the company is constructing plastic cots for workers who are doing environmental projects in the area.

The job listings are no longer searchable on Indeed but now say the beds will be used for a “new ranch in southern Indiana.”

The original job postings are still available on Google.