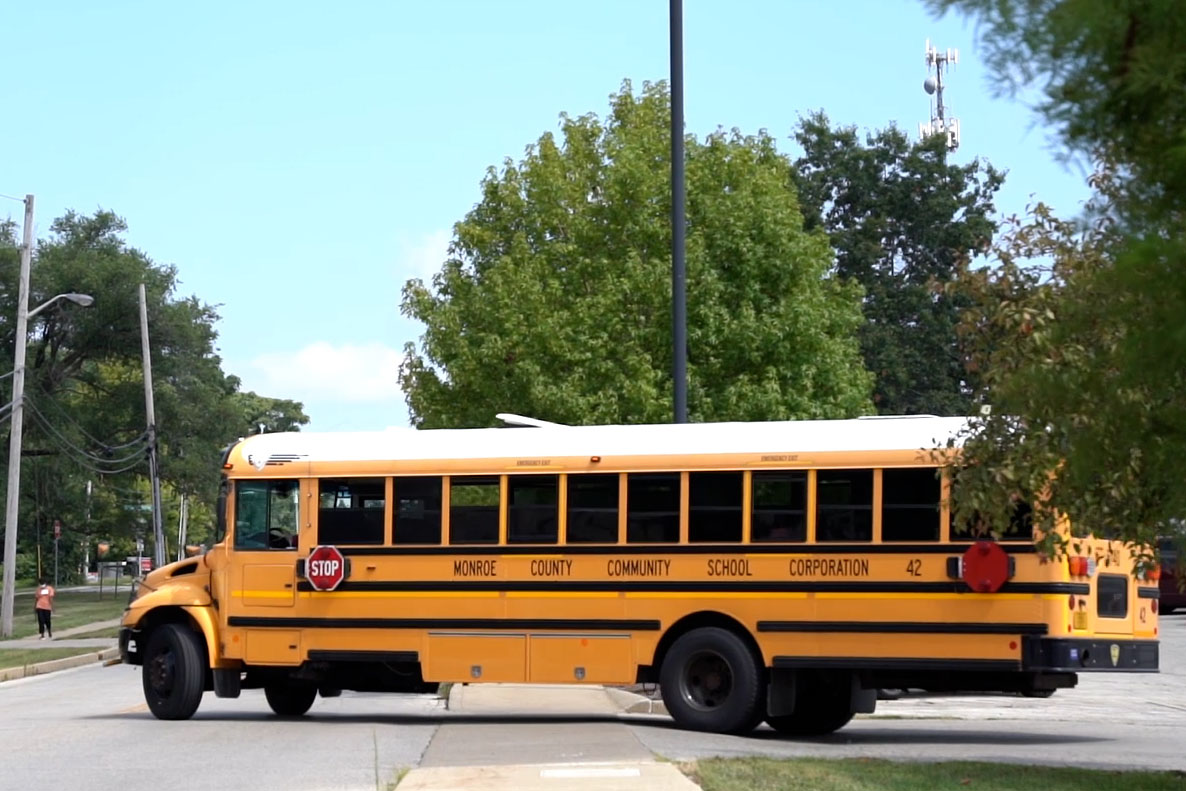 One month into the school year, children in the Monroe County Community School Corporation have more to deal with than wearing masks every day.

Due to a driver shortage, many are facing longer than normal bus rides or long waits to even get on the bus.

Karen Fassino has three children in the MCCSC school system – all at different schools.

One daughter is in the ALPS program at University Elementary School, and just getting to and from school has been a daily grind.

“They will pick her up between about 8:15 and 8:30 in the morning; she’s not getting to school until 9:30 every day, a half hour after school starts,” Fassino said.

Getting home in a timely fashion has been an even bigger issue. She says it was common for her daughter to get home as late as 5:30 or 5:45 in the evening.

One time it was approaching 6 p.m., and her daughter still wasn’t home.

“I finally called the transportation department and wanted to know where she was,” Fassino said. “And I made them stop the bus and drove to her at Tri-North at 6 p.m. Otherwise, she had four more stops ahead of her and she wouldn’t have been home until 6:30 p.m. after getting on the bus at 8:30 a.m.”

Picking up kids after school has its own problems, said Beth Buggenhagen, who has one child at Tri-North Middle School and another in the ALPS program at University.

“Even if I wanted to pick her up at University, the line and the number of parents who are trying to pick their kids up is so long that it could be 40 minutes to an hour just to pick your kid up.”

MCCSC has a web and mobile app called “Here Comes the Bus” that is supposed to allow parents or guardians to track the location of their child’s bus in real time, but parents describe it as finicky at best.

“It was down for a while, and then it was up,” said Ashley Pirani, whose children go to Highland Park Elementary. “We were having some issues with it yesterday. So, I’d say it’s still very rocky using that to know where the kids are.”

Pirani said says she’s not seeing the issues with the buses that other parents are.

“Buses are running a little late for us compared to what they’re supposed to be, but not terribly late,” sahe said. “Well within a manageable timeframe for us. I understand that’s not the case for everyone and there’s a lot longer wait times.”

Buggenhagen is seeing both sides of the issue in her household. The bus for her child at Tri-North runs pretty much on time, but the one for University rarely does. Tuesday, her child didn’t get home until a little before 7 p.m.

“Her bus came home so late last night because she was the third route that the driver had to run for the elementary school,” Buggenhagen said. “So, she ran three elementary routes, one after another.

Along with the app, schools are sending out emails and text messages to parents about when their children get on a bus. But Buggenhagen said getting a text message or an email about her child’s whereabouts after the school has closed does little good to settle her nerves.

“They have to figure out how to get that information out and sending a message at 5:20 that the buses left; that’s already too late, we’ve already freaked out,” she said.

Fassino says she has had to adjust her work schedule because of the busing issues. That was especially true when her daughter had NEA testing.

“So that she would be there on time, I had to go in late for work,” Fassino said. “And now, I left work early so I can pick her up so she’s not coming home at 5 p.m.”

Buggenhagen works at Indiana University and said she and others are struggling to juggle work with getting their kids home in a timely fashion.

MCCSC did not respond to several requests for interviews, but superintendent Jeff Hauswald briefly addressed parents’ concerns during last week’s school board meeting.

He said the school system is short 14 drivers for existing routes.

“Right now, we’re really working hard to be more reliable,” he said at the meeting. “And that reliability is in terms of times so our families know when the bus is expected and to communicate when there’s changes in that.”

Hauswald said with schools returning to in-person learning this year, the increase in bus riders is playing into the issue.

He also said the school system is assembling a team to improve technology to modernize the bus system.

“So that when we have 2,700 additional riders, for example, we have the capacity to that in a way which our route efficiency remains true, and so that we can provide the services that many of our families have come to expect,” Hauswald said.

MCCSC is actively trying to hire bus drivers. They can earn between roughly $19 and $22 an hour, based on experience.

Fassino says she sympathizes with the school system because of its shortage of drivers – and staff in general - but worries about the effect on students.

“How are we expecting kids to do well in school and thrive and learn when they’re literally on the bus for hours every single day?” she said.

And with learning loss a concern during the pandemic, it’s time students can’t afford to lose.