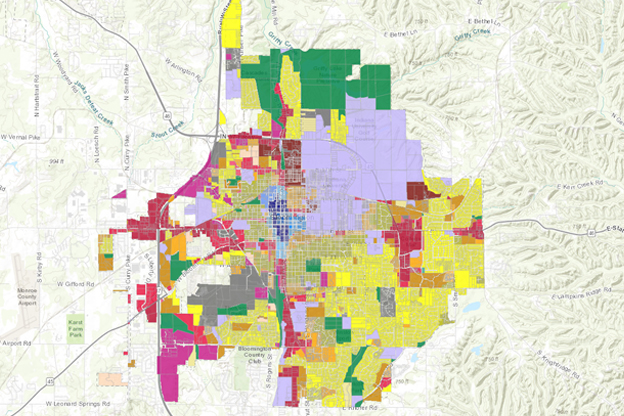 The evening was a culmination of controversy and debate on up-zoning and restrictions on duplexes that has gone on for months.

City council struck down amendment 4 Wednesday night aimed at making duplexes more affordable. Others saw it as a barrier to adding duplexes most likely to have the largest impact in the city’s core neighborhoods.

Amendment 5 would have added more criteria to the public hearing process including approval by the city’s Board of Zoning Appeals, consideration of traffic and congestion, and a duplex’s impact on the character of the area.

The amendment was sponsored by council members Susan Sandberg and Dave Rollo.

Bloomington resident Russ Skiba was one of many during public comment period Thursday night for adopting the amendment.

“They have consistently tried to put some guardrails on a proposal that is nothing short of reckless really, it is a true experiment on the city of Bloomington.”

But council member Matt Flaherty says if a neighborhood has parking constraints the appropriate policy tool is permitting and pricing.

“I think it introduces a level of arbitrariness and subjectivity into the process that is generally bad public policy that has the potential to lead to desperate outcomes for similarly situated home builders.”

That led to public discussion and a vote on the duplex zoning ordinance as amended.

Amendment 3 passed last week creates a cap on duplexes within zoning districts R1, R2 and R3, commonly known as the core neighborhoods and other areas, at 15 per year approved by the Board of Zoning Appeals. It also codified a 150-foot, two-year buffer between duplexes on adjacent lots.

But some residents like Barbara Moss are still opposed to the ordinance. She says a petition now has close to 600 neighborhood signatures opposing the UDO.

“You know we’ve heard an awful lot over the past several months that we do not represent the community, well the community is in any election those who show up, and we have showed up.”

Council member Volan responded that he represents all 14,000 residents in his district, not just those who show up.

Resident Pam Weaver says she’s for duplexes and twice as many people in her neighborhood.

“I’d like to have my neighbors close enough that I can hear them laughing and enjoying their families and friends, but I understand the need for some compromise with those who may be uncomfortable living in the kind of neighborhood I prefer to live in.”

The ordinance passed 6-3 with votes from Volan, Rosenbarger, Sgambelluri, Sims, Flaherty, Piedmont-Smith and dissenting votes from Smith, Sandberg, and Rollo.

The new zoning maps were adopted too on an 8 to 1 vote, with Rollo as the only no vote.

As part of the ordinance, staff will receive duplex data every six months including numbers of bedrooms to monitor the process.

This story has been updated to explain 'core neighborhoods.'