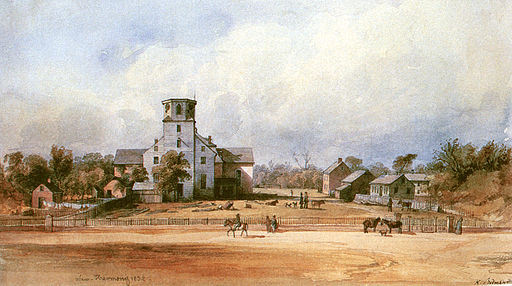 In May 1832, Prince Maximilian Alexander Philipp of Wied-Neuwied (1782-1867) left his home in Europe for an expedition to the United States. The prince was an avid naturalist and intended to follow the route of Lewis and Clark through the American West, accompanied by artist Karl Bodmer, who would make a visual record of the trip.

On his approach to the town, Maximilian noted his first sighting of persimmon trees, full of ripe fruit, and recorded that the forests of southern Indiana were full of parakeets (Carolina parakeets, now long extinct). The prince remained in New Harmony for nearly five months, conferring and working with Say and Lesueur.

In his journal, Maximilian recorded the scientific names of the birds, fish, mammals, reptiles, and amphibians he saw; he catalogued trees and plants; he kept careful note of each day’s weather; and he learned about the area’s rivers. While Bodmer sketched and created watercolors, Maximilian read books on natural history in his new colleagues’ collections and collected specimens. He recorded the first time he ate sweet corn and described an everyday pioneer dish that was new to him—cornmeal mush.

On March 15, 1833, the prince took “a very heartfelt leave of some good friends” and continued his journey. He reached his westernmost destination at Fort McKenzie (in present-day Montana) and spent much of the winter of 1833-34 at Fort Clark in present-day North Dakota. On his journey homeward, he stopped again to visit his friends in New Harmony, this time staying for only a few days.

The journals that Maximilian published after his return to Germany remain today a fascinating source of information on the natural world of the U.S. in the 1830s; on the lives of white settlers and Native Americans in the West; and, in a comparatively brief number of pages, on the intellectual life of New Harmony after its famous years as an experimental utopian community.