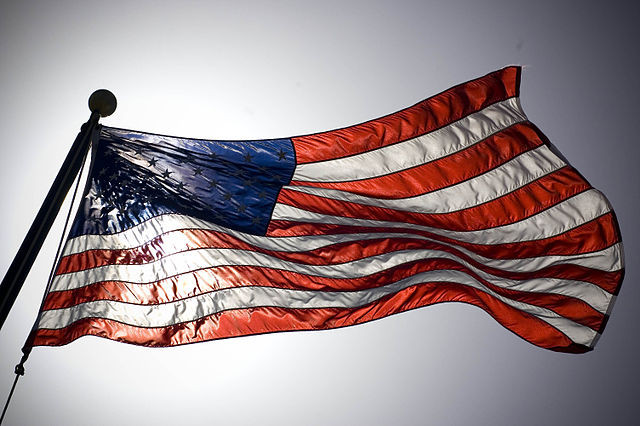 "Whilst snug in their Club-Room, they jovially twine / The Myrtle of Venus with Bacchus’s Vine.” Those are some of the original words to the beloved American national anthem, “The Star-Spangled Banner.” This hour on Harmonia, we’ll explore the sounds of music in early America. Our featured release is the Manuscrit des Ursulines de La Nouvelle Orléans.

Francis Hopkinson was an author, signer of the Declaration of Independence, and early American composer. He began to play the harpsichord quite late—at 17—and composed songs and hymns. Let’s hear two songs by Hopkinson: “My Love is gone to sea” and “O’er the hill far away.”

In grade school, we all learned that Betsy Ross created the first American flag. In fact, Francis Hopkinson deserves some credit on that front as well. His original design, a navy flag, had 13 six-pointed stars against a blue background and thirteen red-and-white stripes. Hopkinson’s flag was adopted by Congress on June 14, 1777, making it the first official American flag. He requested to be paid in a “Quarter cask of Public Wine,” but was never actually compensated. Here is Hopkinson’s song, “My Gen’rous heart disdains.”

We heard a song by Francis Hopkinson, performed by tenor Thomas Hayward and harpsichordist Melville Smith.

Many popular songs in early America were actually old British tunes, paired with new lyrics. The well-known patriotic song “My country, ‘Tis of thee” borrows its tune from the United Kingdom’s national anthem, “God Save the King.” Let’s hear a variation on that original song, “God Save the King,” arranged by Thomas Arne in 1745 for the Drury Lane Theatre in London.

We heard “God Save the King,” arranged by Thomas Arne, from the 1983 Saydisc recording English National Songs. With a text like that, you can see why even with its adopted lyrics, “My country, ‘tis of thee” was not destined to become America’s national anthem.

However, despite its patriotic connotations, the popularity of that stirring melody extended far beyond the British Isles – in 1802, Beethoven wrote a set of variations on “God Save the King.” Here is Melvyn Tan performing those variations on a Broadwood fortepiano.

Beethoven’s variations on “God Save the King” performed by Melvyn Tan.

Oh, Say Can You Hear

Beloved by sports fans and patriots alike, America’s national anthem takes its words from Francis Scott Key’s poem “The Defense of Fort McHenry.” The poem was written to commemorate the War of 1812. Nowadays, we usually hear only the first stanza, but the song, as originally composed, actually has four stanzas. Let’s listen to “The Star-Spangled Banner,” in its entirety, as first published by Thomas Carr in 1814.

But, O say can you hear—Francis Scott Key’s text for “The Star-Spangled Banner” is not the original text for this tune. The original tune was written by John Stafford Smith in the mid-18th century and was paired with the text “Our Anacreon in Heaven.” The song was used as the anthem of the Anacreontic Society, an all-male London society dedicated to “wit, harmony, and the god of wine.”

That was “Our Anacreon in Heaven,” the tune by John Stafford Smith, recorded by the Star Spangled Music Foundation in 2014.

Moving further south, our featured release is the 2001 recording Manuscrit des Ursulines de La Nouvelle Orléans. Anne-Catherine Bucher directs Le Concert Lorrain, in a recording of the rarely-heard music of 18th-century New Orleans. The manuscript, a copy of a Parisian volume, was given to the nuns of Ursuline in 1754. Let’s hear Lully’s “Dans les cieux est un Dien qui m’aime,” as it may have been heard in 18th-century New Orleans.

The women in the convent were able to explore works by many contemporary French composers, including François Couperin, Henri Desmarests, and André Campra. The nuns adapted this music by superimposing sacred texts over the original secular tunes. Let’s hear “L’Espérance” by Couperin and “Descente du St Esprit” by Campra.

An image from the nuns’ manuscript suggests that in addition to keyboard and voice, the convent had access to flutes, oboes, bassoons, violins, and percussion instruments. Let’s hear “Récompense de la Vertu” by Henri Desmarests.

The writer for this edition of Harmonia was Sarah Huebsch.