Welcome to Harmonia . . . I’m Angela Mariani. The names Dufay, Ockeghem, and Josquin are household words - well, in a household interested in Renaissance music at least - but they were surrounded by influential musicians and composers, many of whom we’ve never heard. This hour, we’re going to meet one, Loyset Compère—10 years older than Josquin, and the innovator of many stylistic features the two composers share. This hour, we’ll sample Compère’s broad range of sacred and secular compositions, Plus, on our feature recording, works by Giovanni Legrenzi performed by the ensemble Nova Ars Cantandi.

This hour, we’re going to forge an acquaintance with one of the leading chanson and motet composers of the late 15th and early 16th centuries—Loyset Compère.

Until fairly recently, Compère was considered a “lesser contemporary” of Josquin des Prez, but he is now believed to be a substantially earlier composer than Josquin, making it just possible that Compère was the true originator of the fully imitative style that Josquin perfected. Despite being born c. (around) 1445 in Artois, and therefore Flemish, Compère was naturalized as French by Charles VIII, in whose court he worked. Before he landed in Charles VIII’s court, he sang in the Duke’s chapel in Milan for Galeazzo Maria Sforza, and later, he probably spent his remaining years at the collegiate church of St. Quentin where he held a canonry.

Let’s begin our acquaintance with Compère’s most popular work, the motet Ave Maria gratia plena, one of the most widely disseminated pieces of its time. In it, the well-known “Hail Mary” prayer is embellished with extra text asking all the saints and angels to pray for us.

One of Compère’s earliest surviving works is his massive motet Omnium bonorum plena. The text, which he probably also wrote, mentions a number of older, revered musicians, including Dufay, Ockeghem, Busnois, Tinctoris, and some whose names are otherwise unknown. The opening words can be translated “full of all goodness,” which in French might be rendered De tous biens playne, which is in turn the opening of a very well-known tune by Hayne von Ghizeghem; [early music afficionados might even hear echoes of that very song in this motet.]

Compère was an inventive and skilled composer whose chansons are among his best work. Au travail suis is a quodlibet, quoting both text and music from three songs by Ockeghem, two by Dufay, and once again, Hayne von Ghizeghem’s De tous biens playne.

You can hear highlights from recent and archival concert recordings of early music on Harmonia Uncut -- our podcast, curated and hosted by Wendy Gillespie. Listen online at harmonia early music dot org and through iTunes.


Welcome back. We’re listening to music of Renaissance composer Loyset Compère, from whom we’re now going to hear a motet-chanson that combines a sad love song in the upper voices in the poetic form of a virelai with text from the Lamentations of Jeremiah in the bass voice. Compère composed five such compositions with a Latin cantus firmus supporting [a setting of a French poem in the] two upper voices

Compere composed 14 four-voiced chansons that are quite different from his other compositions, setting amusing, often satirical popular verses to sprightly melodies. Here’s an example: a chanson entitled “Nous sommes de l’ordre de Saint Babouin,” literally “We are of the order of Saint Babouin,” whose text extols the virtues of an easy life - sleeping late, eating, and drinking well. It is the final piece on a recording by the Ensemble Clément Janequin and Les Sacqueboutiers that combines C16 French chansons and dance music with readings of poetry by the person that many consider to be the French Shakespeare - François Rabelais – of a similarly satirical nature:

The Ensemble Clément Janequin joined Les Sacqueboutiers to present a rollicking 4-part chanson by Loyset Compere entitled “Nous sommes de l’ordre de Saint Babouin,” a song about the pleasures of good food and drink— [from a CD titled Rabelais: Fay ce que vouldras,—not the Celine Dion song, but rather “Do what thou wilt!,” the main rule of the abbey founded by the giant Gargantua – a character in Rabelais’ writing.]

Compiete is the Italian word for compline, the final moment of prayer in the monastic day. In 1662, Giovanni Legrenzi published in Venice a collection of complete litanies and Marian antiphons for 5 voices as his Opus 7, hence the title of this recording. Of the fifteen pieces in the collection, 6 are psalms, four are songs to the Virgin, and the others are unvariable parts of Compline. We’ll sample each of those categories. First, a psalm, In te domine speravi - known in English as "In thee, O Lord, do I put my trust."

A psalm from the office of Compline composed by Giovanni Legrenzi, sung by Nova Ars Cantandi. Did you hear how Legrenzi repeats the word “non” to emphasize “non confundar” - “not confounded?”

Next, a Marian antiphon. Let’s listen to Alma redemptoris mater - a title that will probably sound familiar to some listeners, because there are hundreds of pieces set to this ancient text. Listen toward the end for some very juicy dissonance, painting the contrite words of the sinner, “Ave, peccatorum miserere”

Now, finally, we’ll hear yet a third familiar title - Te lucis ante terminum - this time a well-known hymn, especially if you were a monk attending his daily office, because you would hear it every single day at Compline!

Te lucis ante terminum is a very fine place to end Compline and to end this edition of Harmonia. We’ve been listening to our featured release of the week, Giovanni Legrenzi: Compiete Op 7 Final Prayers for the Divine Office. The ensemble Nova Ars Cantandi, directed by Giovanni Acciai*, are joined for this 2020 Naxos recording by Ivana Valotti on the organ.


Harmonia is a production of WFIU. Support comes from Early Music America: a national organization that advocates and supports the historical performance of music of the past, the community of artists who create it, and the listeners whose lives are enriched by it. On the web at EarlyMusicAmerica-dot-org. 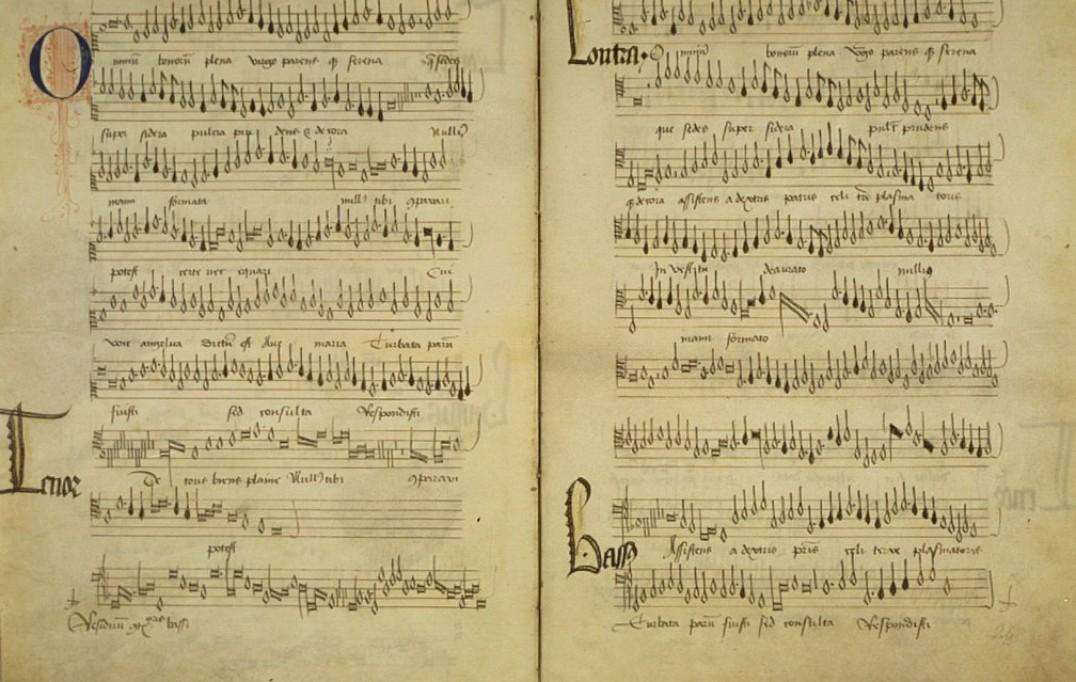 The names Dufay, Ockeghem, and Josquin are household words - well, in a household interested in Renaissance music at least - but they were surrounded by influential musicians and composers, many of whom we’ve never heard. This hour, we’re going to meet one, Loyset Compère—10 years older than Josquin, and the innovator of many stylistic features the two composers share. This hour, we’ll sample Compère’s broad range of sacred and secular compositions. Plus, on our feature recording, works by Giovanni Legrenzi performed by the ensemble Nova Ars Cantandi.