Welcome to Harmonia. I’m Angela Mariani. Tired of jingle bells yet? This time of year, we are surrounded by Christmas music. This hour, you’ll hear even more, but we’re bringing you something a little different. We’re exploring Christmas music of another age – the medieval. Carols, chants, hymns – we’ll hear music from the Tallis Scholars, the Boston Camerata, and more. Plus, our featured release , from the ensemble Gesualdo Six, simply titled Christmas.

That was “Veni, Veni Emanuel,” a Christmas hymn that combines antiphons for the last week of Advent with a thirteenth-century French melody. We heard a concert version by the Boston-based choral ensemble Blue Heron, led by founder and artistic director Scott Metcalfe on their 2015 live recording Christmas in Medieval England.

Back in the 1950s, when the 20th century early music revival was still finding its legs, LPs of Christmas music, performed by groups like the New York Pro Musica, brought a lot of new fans into the early music fold. For many Americans, it was their first introduction to medieval and Renaissance music, both vocal and instrumental. Perhaps you still have a few of those early recordings sitting on your shelf? The New York Pro Musica’s recording English Medieval Christmas Carols, originally released in 1956, features countertenor Russell Oberlin, a Juilliard graduate whose voice was, for many Americans, the first true countertenor voice they’d ever heard. A remastered version was released by Tradition Records in 1990.

Chant played a really important role in the development of music in the medieval church. Despite the Catholic church’s attempt, under Charlemagne, to introduce a standardized form of chant – that’s the kind we now know as Gregorian – there have always been regional and cultural variations in the style and sound of chant. Let’s hear some Christmas chant performed by the Schola Hungarica, from their album Gregorian Chants from Medieval Hungary, Volume 1.

We heard the Te Deum laudamus, from the recording Gregorian Chants from Medieval Hungary, Volume 1, performed by the Schola Hungarica.

Even before Henry VIII’s break with the Catholic Church, the English church tended to do its own thing when it came to chant. Whether this stemmed from creativity, geographical isolation, or stubbornness, no one really knows, but we do know that the form of chant most often heard in the medieval English church was that associated with the Sarum Rite. The Sarum Rite was established in Salisbury in the 11th century. It was a local variant of the kind of worship prescribed by the Roman Rite. Ultimately, the Sarum Rite came into use throughout most of England, Wales, Ireland, and eventually even Scotland. It continued to be heard right up until the events of the English Protestant Reformation. Let’s hear some Christmas chant from the Sarum Rite, sung by The Tallis Scholars.

We heard English medieval chant, from the recording Chant for Christmas from the Sarum Rite, performed by The Tallis Scholars, under the direction of Peter Phillips.

Welcome back. This hour on Harmonia, we’ve been exploring medieval music for Christmas and Advent. As you may have already realized, medieval Christmas music tends to explore a lot of the same themes as contemporary Christmas music – although with significantly fewer reindeer! Angels, lullabies, and the story of Mary, Joseph, and the baby Jesus are all recurring subjects. Let’s hear “Angelus ad virginem,” a medieval carol telling the story of the Annunciation, performed by The Tallis Scholars.

The Tallis Scholars with the medieval carol “Angelus ad virginem.”

The representation of Mary, the mother of Jesus, with the image of a rose is familiar to many contemporary Catholics but has generally lost resonance with most other Western Christians. However, back in the Middle Ages, it was a deeply familiar trope for most Christians, and one found across art forms. We’ll hear the medieval English carol “There is no rose,” performed by The Tallis Scholars, from their 1986 album Christmas Carols and Motets.

The medieval English carol “There is no rose,” as performed by The Tallis Scholars.

If you studied music or literary history at some point in your past, you might remember the term “macaronic,” which refers to a text that combines Latin and a vernacular language. The carol “In dulci jubilo,” which in its original form dates to the late thirteenth century, is a perfect example. The text features a macaronic alternation between Latin and Medieval German. We’ll hear this version now, in a 16th-century setting by Hieronymous Praetorius.

The macaronic carol “In dulci jubilo,” in a 16th century setting by Hieronymous Praetorius, as performed by The Tallis Scholars.

We’ve already heard one carol telling the story of the Annunciation, in which Mary learns that she will become the mother of Jesus. This is, after all, a pretty important part of the Christmas story, and one that has been told over and over again in music for many centuries. We’ll hear the tale again in a different context, a twelfth-century Franco-Provençal narrative performed by The Boston Camerata, on their 2021 holiday release Hodie Christus Natus Est.

The Boston Camerata with the Franco-Provençal “Oiet-Virgines” for the Annunciation. Sung by Anne Azema with Shira Kammen, vielle, and Christa Patton, harp.

We’ll stick with the Boston Camerata for one more version of the tale, from the thirteenth-century Italian Laudario di Cortona. In this processional, the narrator recounts the events of the Annunciation, alternating with a refrain by the faithful: “Dal ciel venne messo novello,” “from heaven came a new messenger.”

Our featured recording this hour is a 2019 holiday release by the Gesualdo Six, simply titled “Christmas.” This album is devoted to the special creativity that musicians and composers have brought to their Christmas work since the Middle Ages. Director Owain Park leads his colleagues through medieval chants and hymns to lush Renaissance motets to carol settings both familiar and new.

First, we’ll hear the final responsory of Christmas matins: “Verbum caro factum est,” “and the word was made flesh.” Hans Leo Hassler’s six-part setting of this text was first published in a 1591 motet collection.

Among the tracks by living composers is a 2015 work by Cheryl Frances-Hoad, born in 1980. “The Promised Light of Life” sets reflections by St. Bede and St. John the Divine on Christ as the morning star.

That was Cheryl Frances-Hoad’s “The Promised Light of Life,” which premiered for Christmas 2015. Owain Park leads The Gesualdo Six on their 2019 Hyperion release “Christmas,” our featured recording this hour.

We’ll wrap up with Gesualdo Six’s interpretation of another familiar Christmas carol with early origins, a lullaby to the infant Jesus narrating the story of the Nativity.

We heard the Gesualdo Six performing the traditional “Coventry Carol,” led by Owain Park on this hour’s featured release, their 2019 “Christmas” album.

The writers for this edition of Harmonia were Elizabeth Clark and Chelsey Belt. 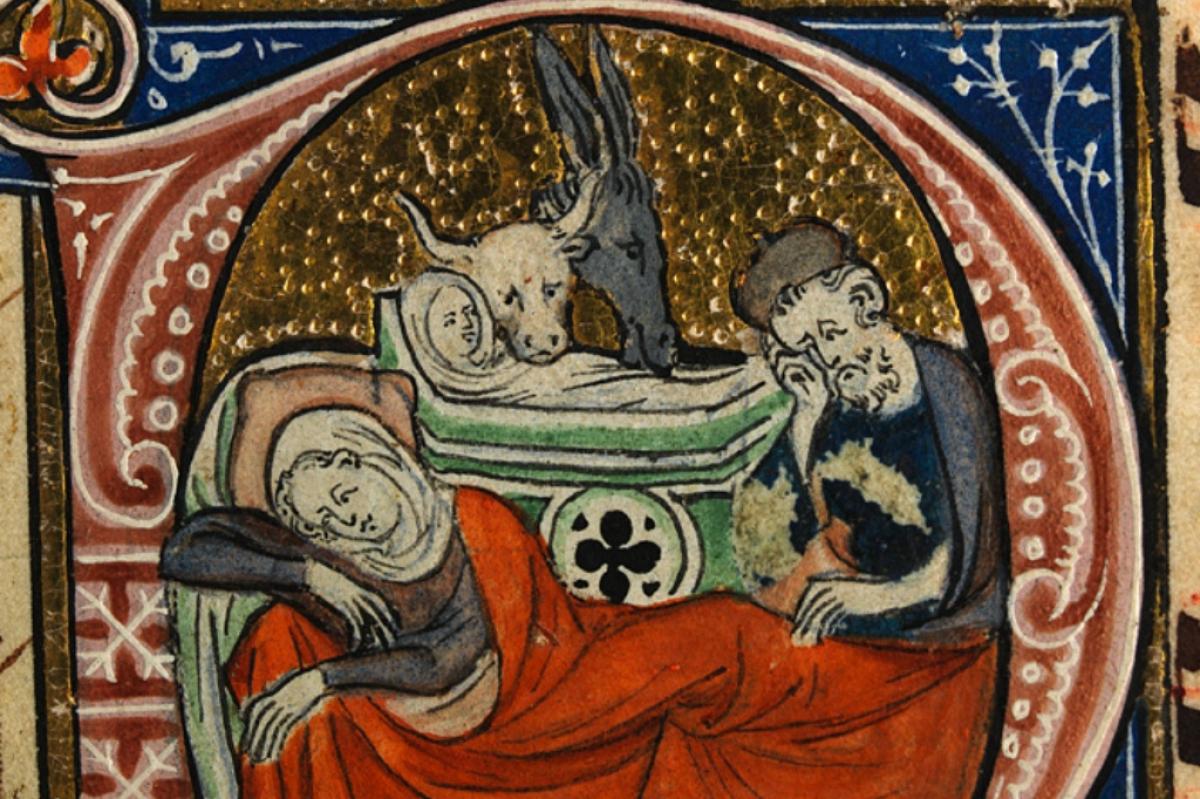 Tired of jingle bells yet? This time of year, we are surrounded by Christmas music. This hour, you’ll hear even more, but we’re bringing you something a little different. We’re exploring Christmas music of another age – the medieval. Carols, chants, hymns – we’ll hear music from the Tallis Scholars, the Boston Camerata, and more. Plus, our featured release from the ensemble Gesualdo Six, simply titled Christmas.